Which Babylonian tablets contains the list of squares and cubes?

(though this has been copied, it seems, all through the Internet).

I've tried, with no luck so far, to find which tablets these were. The information is not specific enough for me to search it, for example, on cdli.

Any idea how I can find this?

Follow-up: I emailed the authors of the article but have not received a response in the 4 months since I sent it.

The 1877 work by Richard Lepsius entitled Die Babylonisch-Assyrischen Langenmafe Nach Der Tafel Von Senkereh states that the two tablets you refer to (of squares and cubes) were discovered by Loftus in 1854 and at that time they were in the collection at the British Museum. It also states that Rawlinson and Smith's work of 1875 on cuneiform inscriptions, volume 4, lists both tablets.

I don't think they are in the Plimpton collection.

Hope this helps. I'm a mathematician who is also trying to trace their location. If the BM comes up trumps I'll let you know.

I found about 50 different sources for your quote, all verbatim copies of each other and without any indication of which those tablets were, who discovered them or any hint to catalogue numbers. I truly hate the internet sometimes, please treat this answer as a guess, there's no way to verify exactly which tablets the quote is about.

One of the tablets is (most probably) Plimpton 322 that lists Pythagorean triples and is part of the Plimpton Collection at Columbia University: 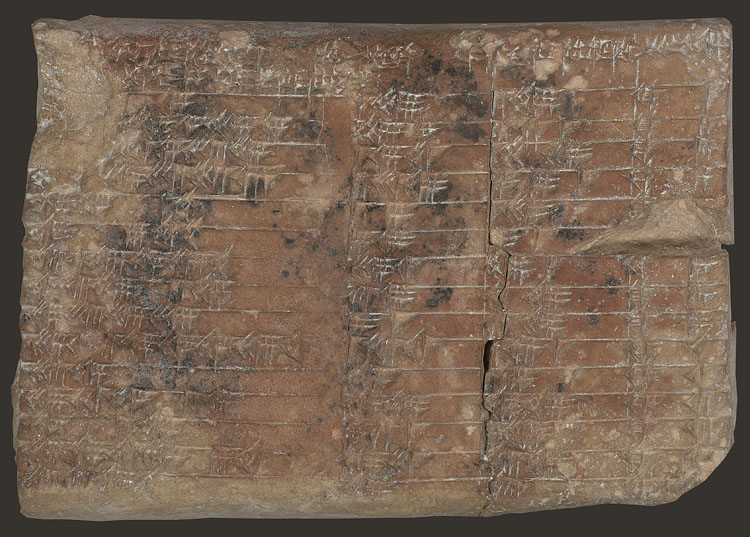 Plimpton 322 was indeed found in Senkereh, a site near the ancient city of Larsa, that's also known as Tell es-Senkereh, Tell as-Senkereh, Tell Senkereh, Sankarah, and Senkerah. Wikipedia says it was written about 1800 BC, the Rare Book and Manuscript Library of Columbia University is a lot less specific, dating the tablet between 1900 and 1600 BC, and Sherlock Holmes in Babylon asserts that the tablet's style suggests a 1600 BC origin (page 340), so the 2000 BC figure doesn't quite fit.

The 1854 figure is also bit problematic, but it roughly coincides with William Loftus' excavations in the area. Loftus discovered a few tablets, but his work in the area was rushed and under-documented, and as Edgar Banks (who later sold the tablet to George Arthur Plimpton) noted the findings were looted by locals. Without a solid record and with the tablets changing hands, I'm afraid a conclusive answer would be extremely difficult.

Another candidate would be AO 8865, a six sided prism with tables of squares, inverse squares and inverse cubes:

It has a similarly uncertain history with Plimpton 322 and it's dated at around 1750 BC.

You weren't kidding. I found those exact two sentences plagerized verbatim all over the Internet. Truly sad.

I did manage to find a least a couple of references with more information though.

The Handy Math Answer Book was not only original enough to modify the sentence a bit, but included some alternate dates, and a very nice extra aside about one object that may (or may not, they aren't clear) be one of the tablets. In particular, it appears to have been a big square with an x through it that "represents a sexagesimal numerical approximation of the square root of two".

That's a distinctive enough phrase that it is almost certainly the object that goes by the exciting name "Babylonian clay tablet YBC 7289":

The pictures shown in Yannis' answer don't much resemble that, but it could be that the above mentioned tablet was one of the two, and Plimpton 322 was the other.

Jules Oppert's student Francois Lenormant wrote his thesis on these tables; the handwritten (!) document begins with a transcription of the tables of squares.

A very small excerpt may also be found on p. 256 of the travel report by William Loftus himself.

A picture of the table in question was published by Lipsius here.

Edit. Neugebauer writes that one of the tables is indeed BM 92698. You can find a photograph of the squares table in Homage to Babylonia, Nick Mackinnon, The Mathematical Gazette Vol. 76, pp. 158-178.

I will interject here. Yannis is wrong, the Plympton tablet is competely different.

Guy Roberts answer is correct. I will add to his answer that the tablet in question is catalogued as #92698 in the British Museum. This is the appearance of the tablet: 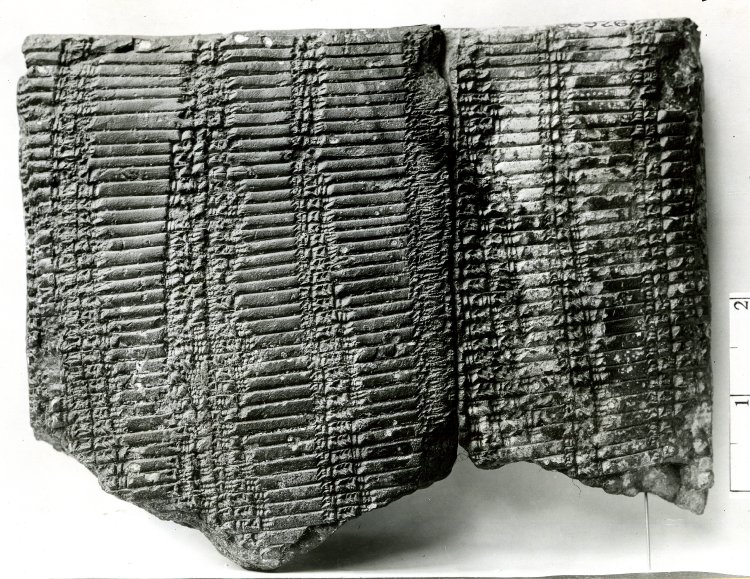 Not the answer you're looking for? Browse other questions tagged ancient-history mathematics mesopotamia or ask your own question.

1
How is a tablet transcribed?

33
Which religion was the first monotheistic one?
11
What were the causes of decline of Babylonian numeric system?
5
What methods did the Old Babylonian society use for solving equations?
1
Does there exist a comprehensive list of every ancient document and artifact ever recovered?
5
What is the earliest-known list of the Roman Principate?
1
Which emperor tried to command the tides?