During the American Civil war did gunboats range far into enemy territory?

In other words during the American civil war did the “front line” or enemy held territory act as a barrier to the passage of gunboats up and down rivers? Or was it possible for any to move deep into enemy territory (operate in areas where the enemy held one or both banks)? If this was not possible what stopped it happening?

By gun boat I mean any naval riverine vessel type.

Both the Union and Confederacy employed river gunboats during the US Civil War. They were often improvised from flat-bottomed side- or stern-wheeler civilian river boats and armored with layers of wood, iron, hay, and cotton. Armament was typically the heaviest cannon the crew could lay their hands on and still float. River gunboats were used to attempt to roam deep into enemy territory. River defenses were set up to protect against enemy raids and flank attacks.

The troubles they ran into included simply navigating the river. Low water was a problem, rivers have sandbanks which shift requiring a guide to avoid grounding; armor and guns added weight which increases the boat's draft. High water was also a problem, river currents can be so strong that the weak and inefficient engines of a gunboat of that area cannot make much headway upstream.

A gunboat wishing to bombard an enemy position would do better to attack upstream. The gunboat would be slow to close the range with the enemy, and it would be more difficult to ram through any barriers such as chains, but if disabled the gunboat would naturally float away from the enemy back to their lines.

A gunboat on a raid behind enemy lines would prefer to attack downstream. This would allow them to bypass enemy defenses faster, and gave them more momentum to ram through barriers. If disabled the gunboat would float helplessly past enemy defenses into enemy territory, but that was where they were going anyway. It would also allow the raider to silently bypass defenses at night, engines off allowing the current to carry them along.

Fixed enemy defenses consisted mainly of forts with guns overlooking the river to shoot at boats, river chains or "booms" to physically stop a boat; usually in optimal range of the aforementioned guns, and underwater contact mines referred to as "torpedoes". Occasionally there would also be enemy gunboats to contend with. Local enemy troops may fire on the gunboat with rifle and cannon from the shore, but was often ineffective.

At places the river and fortifications could be combined. The many twists and turns in American rivers meant a well sited fort could keep a passing gunboat under fire for quite some time as it weaved its way past the fort.

Once past the fixed defenses, a gunboat could have open sailing into undefended territory as far upriver as they could navigate. However, the temperamental nature of the steam engines of the time were their own enemy. A gunboat raider could find itself downstream from safety helpless with a disabled engine. This was the fate of the CSS Arkansas.

Timberclads Raid up the Tennessee

One of the early successes of gunboats was the Battle of Fort Henry in Feb 1862. Fort Henry had been constructed to halt traffic on the Tennessee River.

River levels could change quickly and the site of was poorly chosen. Less than a year old, when the Union attacked the fort on Feb 6th, 1862 some of its guns and stockpiles were under water. Seven improvised Union ironclads forced Fort Henry to surrender in a little over an hour with minimal casualties. Two days later the whole fort was under water.

With the way upstream now clear and the ironclads under repair, the "timerclads" USS Tyler, USS Conestoga, and USS Lexington were sent upstream to raid behind enemy lines. The gunboats and their raiding parties roamed freely as far as the river was navigable destroying supplies and capturing ships.

Island No. 10 was one of those aforementioned forts well sighted on a tricky bend in Mississippi River. It was a formidable obstacle for any passing fleet. 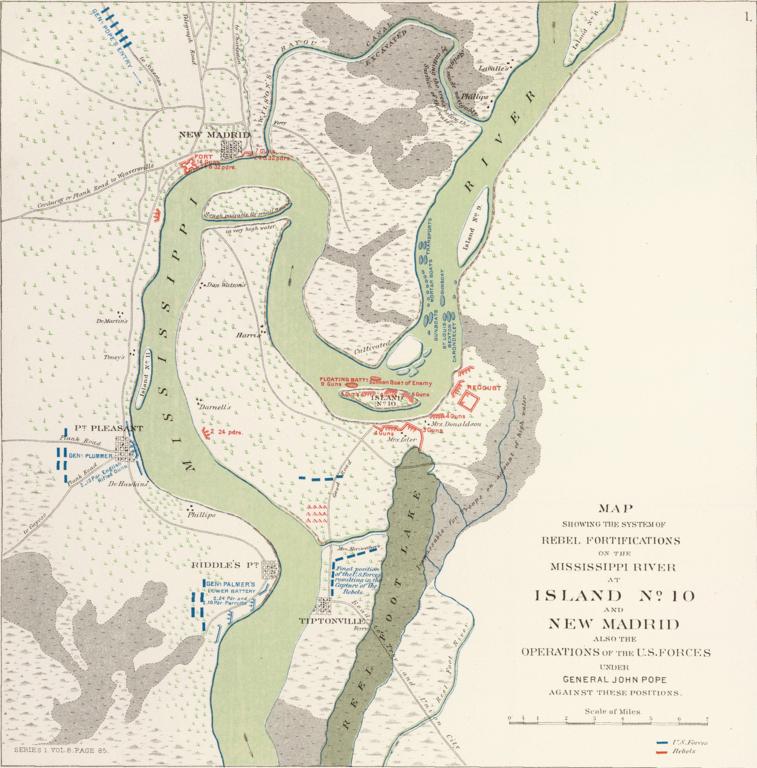 Swampy terrain meant the shores around the island could only be approached from the west. This required a Union river crossing downstream of the island. This would be contested by Confederate gunboats, and the Union gunboats were upstream. The Union had to get some gunboats past the island to protect the crossing.

Captain Walke of USS Carondelet volunteered to make the trip past No. 10 at night. Wood, hay, rope, chain, and coal was stacked as extra protection. Her steam was diverted from her smoke stacks to be less visible. A coal barge was lashed to her side facing the fort to absorb damage. Extra infantry was taken on board to protect against boarding.

Carondelet set off in a thunderstorm and nearly made it until soot in her stacks caught fire giving her away. The fort opened fire, but the dark and rain made the fire inaccurate. Captain Walke held his fire to not give his position away and slipped past.

Two nights later USS Pittsburg [named for the city of Pittsburgh which has fought to retain its "h"] repeated the feat and assisted in the river crossing.

CSS Arkansas Bulls Through To Vicksburg

While the USS Carondelet and Pittsburg used stealth, the CSS Arkansas used brute strength. Launched in April 1862 in Memphis, she was heavy armored with railroad tracks over oak and cotton, and heavily armed with 6 inch rifles and 8 inch smoothbores. However, she was plagued with engine troubles which would be her demise.

In July her Captain Brown was given her first mission: sail down the Mississippi from Memphis past any Union gunboats on the river, break through the Union fleet attacking Vicksburg, refuel and repair, then continue downstream past any further defenses to the Gulf of Mexico and join the Confederate Navy at Mobile. Just making it to Vicksburg would be a feat.

Arkansas immediately ran into trouble with her engines giving a deserter the opportunity to alert the Union. Captain Walke and the now familiar ironclad USS Carondelet was sent to investigate with timberclad USS Tyler from earlier, plus the ram USS Queen Of The West. In the ensuing battle Queen of the West, fighting upstream, could not use her ram and withdrew. Carondelet and Tyler turned away to draw Arkansas towards the Union fleet. Carondelet grounded and Arkansas wrecked her with a broadside on her way past.

Arkansas and Tyler continued to batter each other for a half hour steadily approaching Vicksburg. The Union fleet, not thinking it was possible the Confederacy had an ironclad of such power on the river, at first thought Tyler and Queen Of The West were approaching with a prize and were caught by surprise.

Captain Brown was now faced with four rams, eight ocean-going warships, three gunboats, plus mortar vessels and transports all scrambling to go to quarters and raise steam. Arkansas was too damaged to retire upstream and resolved to ride the current through the Union fleet. Brown ordered his pilot to sail as close to the Union warships as possible so the rams could not gather speed to attack. For 30 minutes the Arkansas was mauled and fired back at every ship she passed. Her colors were repeatedly shot away only to be rehoisted. The USS Benton attempted to block her path but evaded and raked by the Arkansas.

CSS Arkansas arrived in Vicksburg badly damaged, but with surprisingly light casualties and began repairs. The US Navy was mortified, CSS Arkansas represented a constant threat requiring the Union navy to stay on constant alert. They made destroying Arkansas a priority. Union ships paraded past Vicksburg trying to hit the well concealed Arkansas to no avail. Mortar fire did not find its mark either. Essex, Queen of the West, and Sumter went in to ram her, but the poorly coordinated attack was fought off by a skeleton crew and the Vicksburg guns.

With no help from the army forthcoming the bulk of the Federal fleet left Vicksburg. Captain Brown left and his executive officer Lt. Stevens took over command. CSS Arkansas was ordered to proceed down the Mississippi to help recapture Baton Rouge by attacking Union gunboats. Stevens protested they were not ready, but was overruled.

On August 5th, within sight of the Union fleet, both engines failed. The crew loaded the guns, abandoned ship, lit the ship on fire, and sent her downstream towards the Union fleet with her guns firing randomly. Eventually her magazines exploded.

Not the answer you're looking for? Browse other questions tagged military weapons american-civil-war ships tactics or ask your own question.