Can someone help identify this statue? 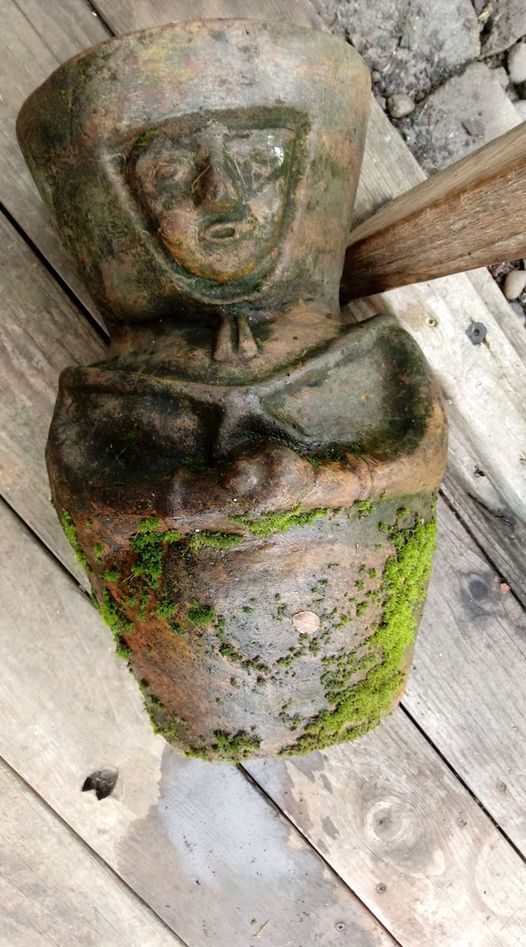 I'm agreeing with @Spencer in the comments here. I'm not an expert on this (there are I'm certain people at universities nearby the find in Oregon who are), but that doesn't look like a Pacific Northwest tribal iconography to me, and the only stone I could find evidence of them using in their art was agrillite, which is a soft black shale-like rock.

They much preferred working in wood or whalebone. That picture just looks like the quasi-occult type of things modern people like to put on their garden statuary.

I disagree. There is a chance it might be of Native American origin. (Elkton is a small town in the Oregon Coast range.) One has to admit that we did too efficient of a job eliminating all traces of their culture; it may be an artifact from one of them. IMHO, there are some superficial similarities to figurines found at one site in SW Washington.

Have you contacted someone at either the Portland Art Museum or the University of Oregon Museum of Natural and Cultural History? They have Native American collections, which means they have people on staff who could give you a better answer than some random person on the Internet. (Or if it is a collectible garden ornament, they might also know.)

Clarification: By the "figurines found at one site in SW Washington", I was referring to the Shoto Clay figurines. Many years ago I purchased Robert Slocum & Kenneth Matsen, Shoto Clay: Clay Artifacts From the Lower Columbia River (Binford & Mort, 1968), which reports the discovery of a series of fired clay figurines. I still have the book, but I'm at work so I can't provide any further details about this excavation at the moment.

A catalogue of these enigmatic figurines, David Heath, Shoto Clay - Wares from the Lake River Ceramics Horizon of Southwest Washington State, Part 1 - Figurines can be found on archive.org here.

As I said before, there's a superficial resemblance so I may be wrong, but I had to remark on the similarities.) After all, querying either of the two institutions I mentioned above, or the authors of these works, might lead somewhere.