Did the coronation mantle of Napoleon survive? And if yes, is it on display somewhere? 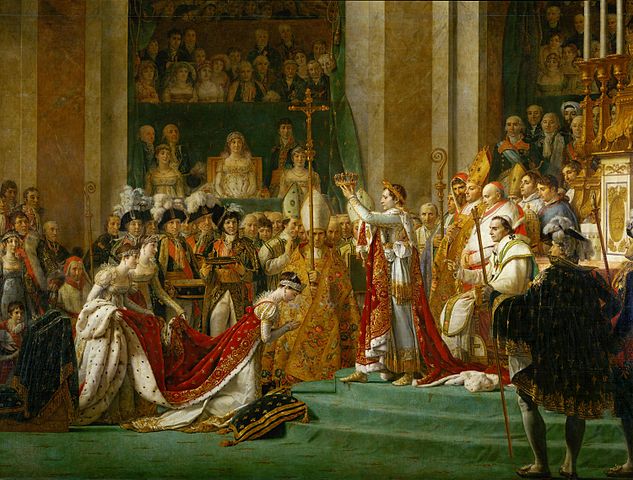 The only ceremonial garments left today from the actual coronation are the dress and court train of Countess Bérenger, wife of State Councilor Jean Bérenger:

… would be the only vestiges preserved among the ceremonial costumes worn during the Coronation. (fr:WP) 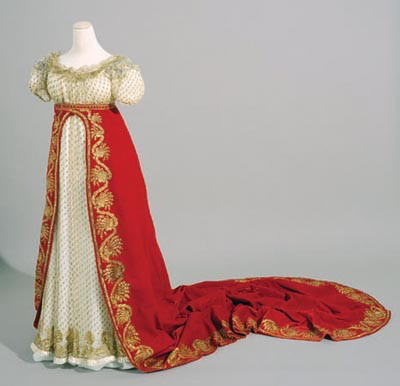 The dress of Countess Bérenger: one of the last vestiges of Napoleon's Coronation

In 1804, Jean Bérenger, hostile to the heredity of power, was nevertheless invited to the coronation ceremonies of Napoleon I, which took place on Sunday 2 December 1804 at Notre-Dame de Paris in the presence of Pope.

In the nave of Notre Dame, he is on the first benches of the tiers to the right of the throne. His wife is in the stands, as are all the wives of the great Dignitaries.

This dress and court train are among the last vestiges of the coronation. They were presented for the exhibition Les Trésors de la Fondation Napoléon. In the intimacy of the Imperial Court, which was held for the bicentenary of the ceremony, from 28 September 2004 to 24 April 2005 at the Jacquemart-André Museum on the initiative of the Fondation Napoléon71. Since then, they have been regularly exhibited in various museums in France and around the world.

Not the answer you're looking for? Browse other questions tagged napoleon or ask your own question.

18
Did Sun Tzu's "Art of War" influence Napoleon's philosophy of war and strategy?
5
Napoleon's role in serfdom abolition
3
Napoleon's exploits in 1785
10
Were Napoleon's chances of being caught after Waterloo high or low?
1
Napoleon's medals
3
Was Napoleon's General Joachim Murat of Turkish descent?
18
Which version of Napoleon's "Europe is a Molehill" quote is correct?
6
How to understand the geography of Napoleon's military campaigns?