How tall was Frederick the Great of Prussia?

Frederick's father, Frederick Wilhelm I of Prussia, was somewhat short at 5'3" (160 cm), as discussed in an article on the Potsdam Giants. But how tall was Frederick II?

Frederick the Great was rather short as well.

The city of Potsdam would be one source for giving you that number: 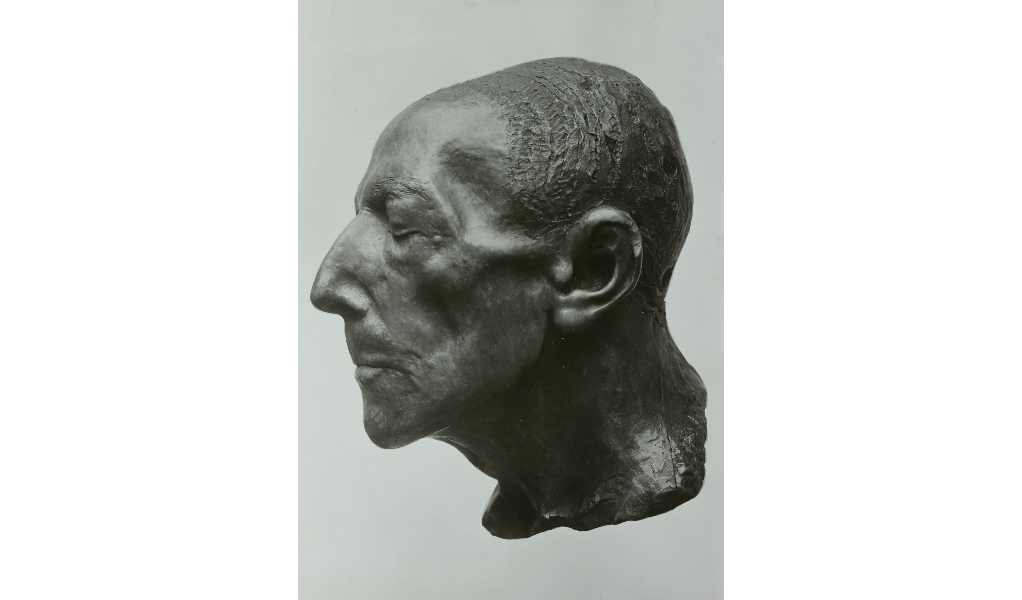 These may be a bit more complicated, as units of length weren't as standardised as today:

With regard to the length measures, a distinction must be made between 3 different periods:

The first would give an incredible height, and not dezimal but duodezimal was more often in use. So the numbers for the latter would be

The minimum height requirement in his army (except for artillery) was exactly 5 feet.

When Frederick was fourteen he was appointed Major of the Potsdam Grenadiers, in other words the giants, and spent part of his time at Potsdam. A very small major he must have seemed; as a grown-up man he measured five feet seven; he was a particularly thin and peaky boy whose face seemed to contain only two enormous blue eyes… — Nancy Mitford: "Frederick the Great", Hamish Hamilton: London, 1970.

No German language source I found corroborated this measurement of 5'7", Mitofrd doesn't give a source, and I strongly suspect some kind of conversion error in Mitford's biography.

In contrast, a nicely sourced reference gives the following:

Frederick the Great was in fact, according to his contemporaries, "somewhat below medium height", just five feet two inches, a maximum of five feet five inches, i.e. about 1.64 metres long. He was considered "petit" by his contemporaries even in the 18th century, when people were not as long on average as they are today.
— Wilhelm Bringmann: "Friedrich der Große. Ein Porträt", Herbert Utz Verlag: München, 2006. (Interestingly, also quoting Mitford, with 1.64 m, plus another source 'Vehse'. Alas, the snippet available now doesn't include the complete bibliography: PDF)

Example for a source quote in French and German attesting his petit physique:

Which gives us actually two different numbers for heights, one with suspicous exactness relating to when he was 19: 5 feet 2 inches and 3 lines. The other then contrasts this seemingly over-exact number without an actual source for it to the same measurements in feet and inch that is reported for Napoleon. But the latter height description for Frederick is then 5'5" (no lines) alleged by his last servant, shortly before his death: 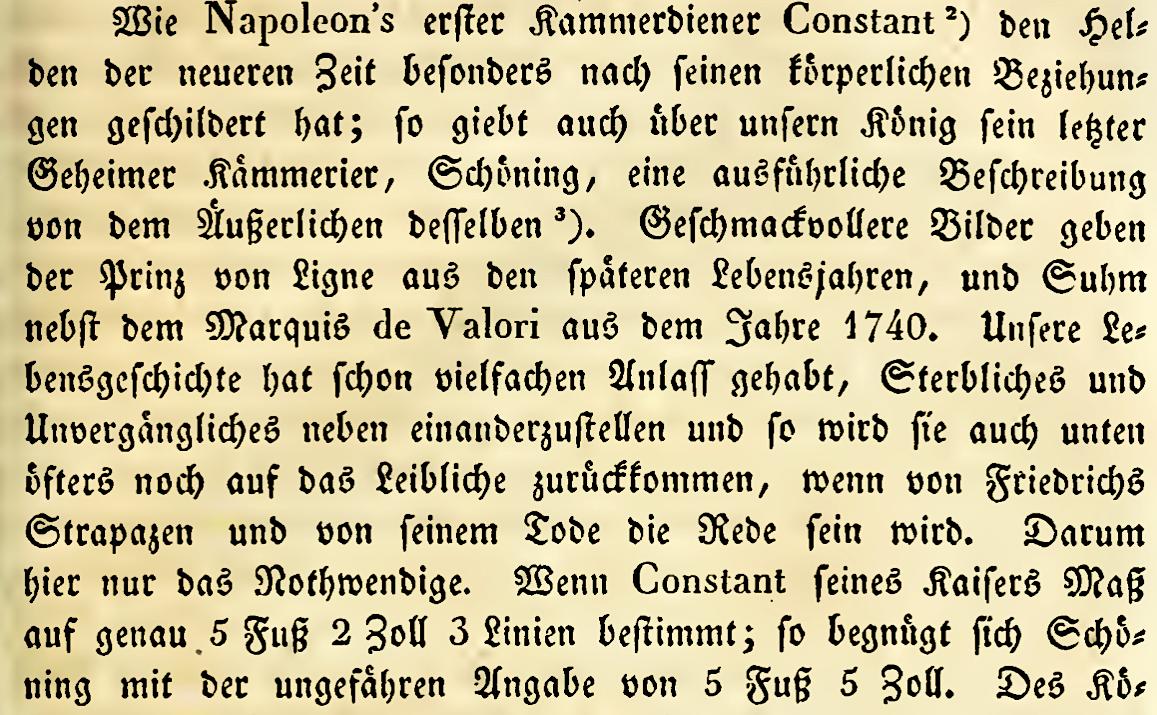 What then follows is a description delivered by a French diplomat.

— Johann David Erdmann Preuss: "Friedrich der Grosse: Eine Lebensgeschichte", Band 1, p20, p 420. (Albeit the latter, lets call it 'rare' measurement, this author already acknowledges the servant source as "imprecise" with "5 feet 5 inch".
Note also the picture included here of Frederick's death mask. And keep in mind that the description of his nose in this written source from 1832 indicates that a certain hagiographic embellishment is certain in that source that also fails to specify which 'foot' it uses, and simply glosses over its own French source material being in conflict with itself, the French calling out a 'petit' man, while his biographer describes him 'of average height'. In any case, it is rather unlikely that the king continued to grow that much above his father after being a known smallish boy and later in old age walking standing rather bowed down. (Cf: — Bernd Krysmanski: "Nur Hogarth zeigt den Alten Fritz wahrheitsgemäß mit krummem „Zinken“. Die uns vertrauten Bilder von Pesne bis Menzel tun dies nicht", in: Effinger et al. (eds.): Von analogen und digitalen Zugängen zur Kunst – Festschrift für Hubertus Kohle zum 60. Geburtstag, Heidelberg: arthistoricum.net, Advance online publication, 07.06.2019, https://doi.org/10.11588/arthistoricum.493.c6566)

At the age of 19, Friedrich the Great was

accourding to literature published in 1832. 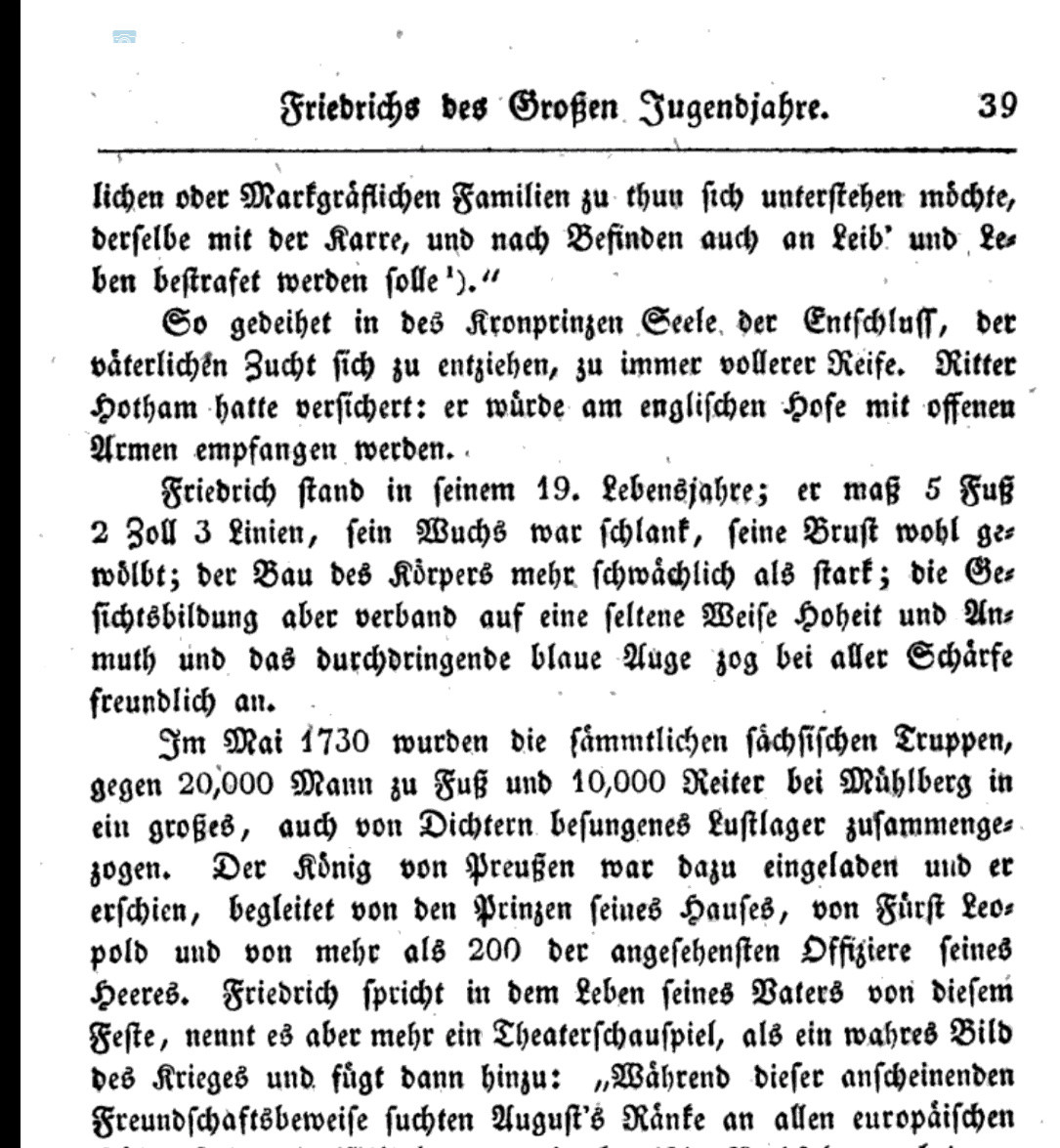 Note:
There are 2 values used for calculations from Prussian (Duo) Feet to meters 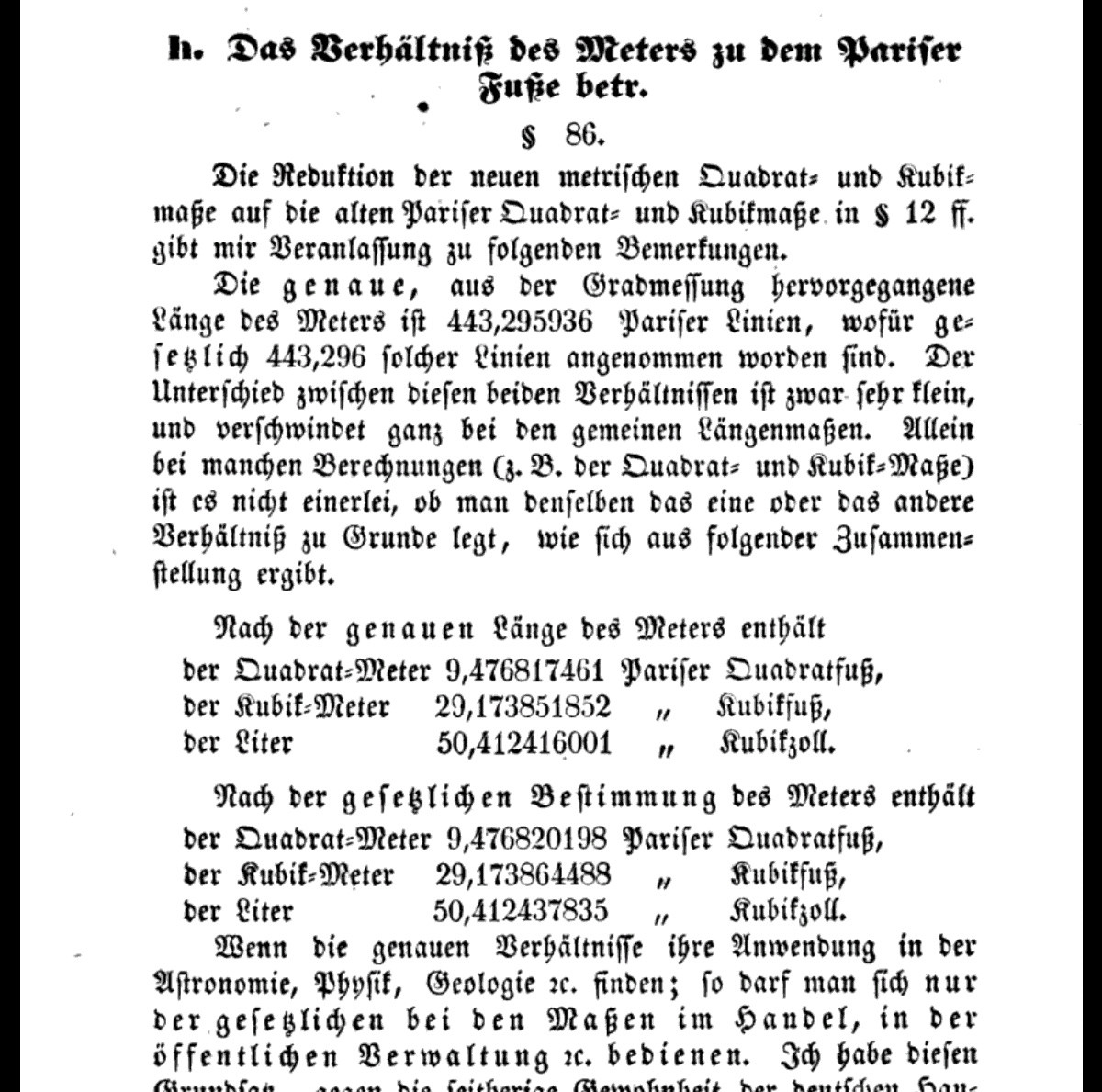 Not the answer you're looking for? Browse other questions tagged prussia individuals or ask your own question.

8
Why did Frederick the Great do so much worse against the Russians than against his other enemies in the Seven Years' War?
13
Was the Soviet Union in 1945 seeking to capture German soldiers and civilians, or drive them west?
22
Why was the shape of German states pre-WWII (especially Prussia) so complicated?
10
Annexation of the Kingdom of Hanover by Prussia
10
Was 18th century Prussia really so militarily obsessed?
3
Was Fredrick the Great considered a strong military leader or was it all because of the superior officers that came out of Prussia at the time?
3
Was there a city called "Margorin" or "Margorum" in Prussia in 1885?
10
Was Leo II of Armenia poisoned?
25
What exactly was East Prussia between 1933 and 1945? Was it part of a larger government, and which one?