Can you identify this US Army uniform?

This is my great-grandfather. I would like to know what he did in the Army. Can you identify whether he was infantry or cavalry? 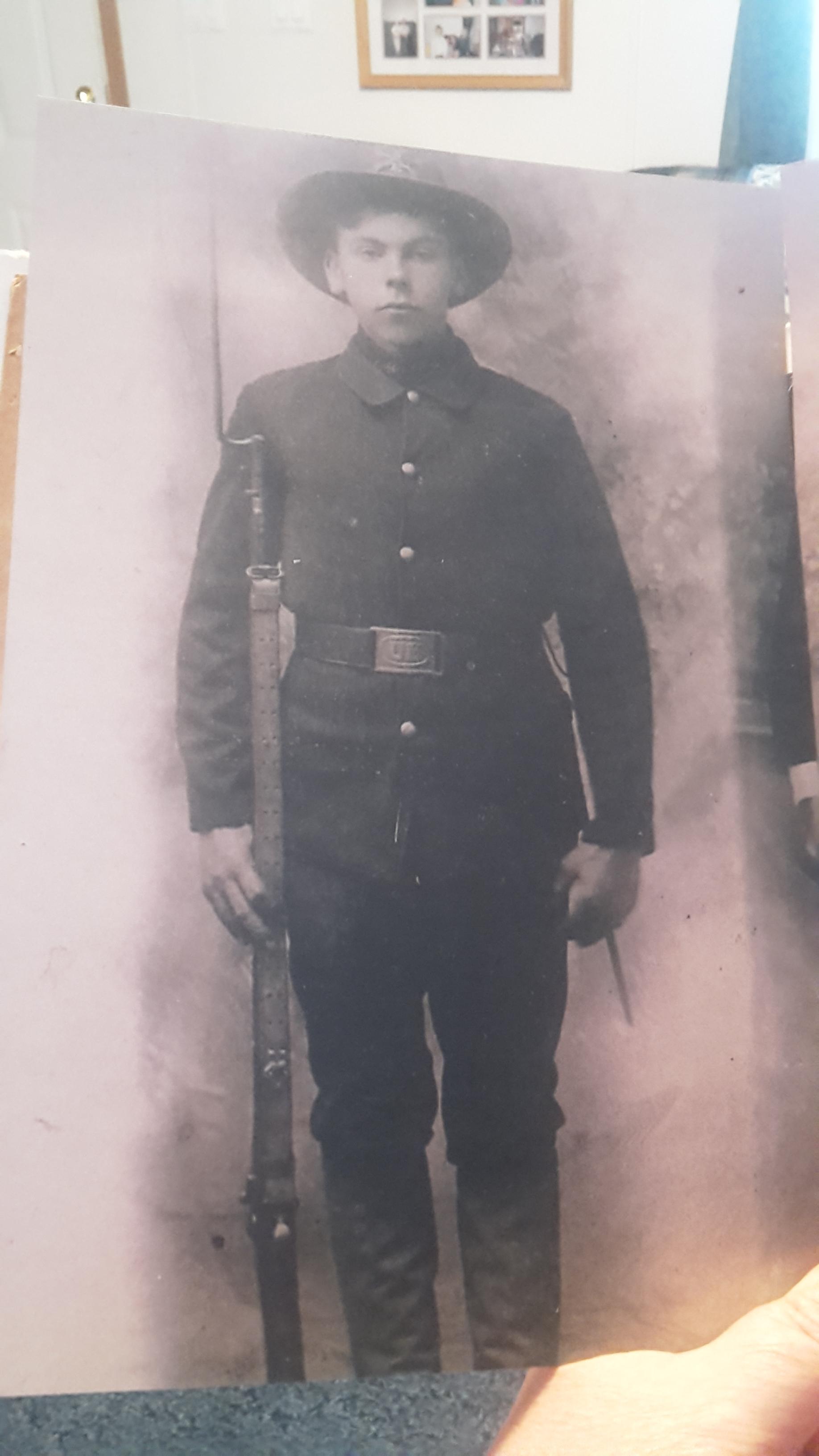 Thus I guess that the photo was probably taken before khaki uniforms were introduced about 1900.

When I was a child, I saw the movie General Spanky (1936) and was quite confused by the anachronism of the "Our Gang" kids from the 1930s coexisting with US soldiers in dark blue 19th century uniforms.

I note that the hat has insignia with two long items crossed in a saltire, and something above and something below the intersection.

The insignia of the US infantry was originally a circular bugle horn (not to be confused with a bugle) which was used during the Civil War of 1861-65, but it was changed to two crossed rifles a few years or decades later.

So if the crossed items in the hat can be identified, you will know if he was in the artillery, cavalry, or infantry.

Check out the size of the US armed forces by year in this list:

He seems to be carrying a rifle with a bayonet and have a bayonet sheath on his belt. That indicates he might be in the infantry.

If the photo is the only evidence you have of his military service, it is possible that he was not the regular army, but was a part time soldier in the militia, the ancestor of the present National Guard.

I assume that you know the name of your great grand father and have some idea of his death date and how old he was when he died. Most regular army soldiers were young men in their twenties and he doesn't look very old in the photo, So having an idea when he was born gives an idea of when he would have been in the army.

If you know his name, know his unit, and have an idea of the date range when he served, you should be able to acquire copies of his military service records and/or pension records from the National archives.
a

Can't tell from the uniform, but the rifle he is holding may be a clue.

That appears to be a model 1873 trap door Springfield - the release handle for the trap door is barely visible forward of the hammer. This was a single shot breechloading rifle, adopted in 1873, and widely used by the Army until the adoption of the short lived Model 1892 Krag, and later the Model 1903 Springfield, when the Krag was found to be lacking in the Spanish-American war.

The Model 1873 came in two barrel lengths: 32" for infantry, and a short 22" carbine for cavalry use. The cavalry version did not have a bayonet lug so a bayonet could not be attached, and the very short barrel would have ended just below his belt.

Your great grandfather is holding the infantry version, so this would tend to indicate that he was in the infantry.

Not the answer you're looking for? Browse other questions tagged military 20th-century 19th-century identification uniform or ask your own question.