Did Argentine President Juan Peron grant free access to the radio, the press and two soccer stadiums to a preacher called Tommy Hicks in 1954?

The title is a summary of claims I've read from several informal sources. For example, this site claims:

It was in this environment that Tommy Hicks was welcomed into the presidential office. After Hicks informed the president what he was asking permission for [...] and the president then gave Hicks and the evangelism committee their requests:

It wasn’t long till the Atlantic Stadium’s 45,000 seats were maxed out, without even standing room being left. Crowds gathered for blocks around the stadium in every direction. To accommodate those outside the stadium, loudspeakers were installed so they could hear the Gospel message that was being preached every night. Out of necessity, the services were then moved to the 110,000-seat Huracán Stadium on May 22, which also began to overflow

Similarly, the description of this amazon product claims:

He suggested to the local church committee the possibility of hiring a 25,000-seater stadium and employing the press and radio to advertise the meetings. This seemed absolutely absurd but Tommy Hicks, unwavering in his faith, made arrangements to visit the Argentine dictator leader, President Juan Peron. [...] which secured the availability of the Atlantic Stadium with a seating capacity of 25,000. Soon overwhelming crowds forced them to relocate to the Huracán Football Stadium with a seating capacity of 110,000, which also overflowed.

The next day the guard greeted Tommy and his interpreter cordially and escorted them to President Peron’s door. The President greeted Tommy and his interpreter and after asking them to be seated, asked the reason for them coming. Pastor Hicks carefully explained to Peron the plans for the city – wide salvation – healing crusade planned. [...] He also asked for full rights for the evangelicals to meet in stadiums and arenas of the nation. [...] At this meeting President Peron sat down and signed the total freedom for the evangelical church in Argentina.

And lastly, this site:

Tommy Hicks returned the next day and was soon ushered into the presence of this feared leader. He quickly explained that he wanted to conduct a salvation-healing campaign in a large stadium, with press and radio coverage. [...] Needless to say Peron gave Tommy everything he requested. The Atlantic Stadium with a seating capacity of 25,000 was rented. Soon overwhelming crowds forced them to relocate to the Huracane Football Stadium with a seating capacity of 110,000.

Are there reputable sources either confirming or refuting whether Juan Peron ever granted free access to the radio, the press and the Atlantic and Huracán stadiums to a foreign preacher named Tommy Hicks and his evangelism committee in 1954?

At least some of the above seems to be true. Academic sources confirm that (1) Theodore 'Tommy' Hicks did meet Peron, (2) the use of at least two stadiums was granted (Atlanta and Huracan, both in Buenos Aires), (3) meetings at these stadium were very well-attended (though numbers are disputed), and (4) there was both press and radio coverage.

It cannot be confirmed that Hicks and the evangelism committee had the "freedom to preach anywhere they wanted". In fact, there is no evidence that they held any meetings outside of Buenos Aires.

Juan Peron's motives for granting these favours were political rather than religious, and occurred at a time when there was much friction between the Peronists and the Catholic Church.

Argentine historian Lila Caimari (University of San Andrés, author of "numerous articles and book chapters on various dimensions of Argentine social and cultural history") mentions Hicks meeting Juan Peron and having use of the Atlanta stadium for several months:

In March 1954, Perón met with Pentecostal pastors Arvizu and Hicks, in an interview widely covered by the official press. This public manifestation of support naturally produced new Catholic complaints, complaints which failed to diminish the goodwill of the government toward Pentecostals when they launched a great Evangelical campaign led by Rev. Hicks.

Hicks' meeting with Peron took place on the 16th of March, 1954 at the Casa Rosada, the office of the Argentine president. Another source, Seth N. Zielicke, presents a not dissimilar story. Although he does find inconsistencies in some accounts of the time, these do not concern the basic facts asked about by the OP. Zielicke, a PhD student at the time of writing, states:

After meeting with Perón, Hicks obtained the necessary permits for the stadiums and received free access to the press and the radio. The next day, evangelicals were greatly surprised to find a picture in the newspaper of Hicks standing next to President Perón with the necessary permits.

There was clearly a significant degree of official support, which proved to be more than a little controversial:

The activities of this pastor took on the dimensions of a real social phenomenon. Between May and June 1954, Hicks produced daily "miracles" before an enormous crowd at the soccer stadium of Atlanta. All sorts of stories about the "Atlanta magician" began to circulate: he cured the sick, the blind, the deaf and the dumb-and all of this in Christ's name. The government's collaboration with the Hicks campaign was no secret: the preacher was able to obtain a special permit for mass public assemblies - a privilege granted to few in 1954 - and the police limited itself to maintaining order at the meetings.

As the meetings drew larger and larger crowds,

On Saturday, May 22, Hicks and the leaders moved the meetings to the Huracán Stadium, the largest in the country, with a contested capacity of 100,000.

Zielicke notes disagreements over the sizes of these meetings, with estimates ranging up to 200,000. The president of Huracan football club estimated 180,000, though it's not clear if this happened for one or for several meetings.

Unlike Zielicke, Caimari does not mention of radio coverage, but 'access to radio' is mentioned in the Encyclopedia of Protestantism (along with the alleged curing of Peron's skin disease):

In 1954, evangelist Tommy Hicks appeared to have healed President Juan Peron’s skin condition; Peron gave Hicks access to Argentinean radio and allowed him to rent a large stadium in Buenos Aires. During his two months in Argentina, several hundred thousand attended Hicks’s meetings, and a national Pentecostal movement was created.

Source: J. Gordon Melton (ed.), ‘Encyclopedia of Protestantism’ (2005). Note: Melton is Director of the Institute for the Study of American Religion in Santa Barbara, California. 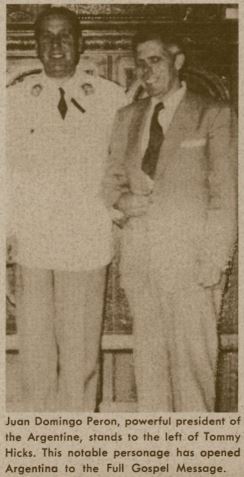 The above photo is taken from a source which may be considered dubious, but there is no obvious evidence that it has been doctored (and there seems to be little doubt that Hicks did meet Peron - the skin cure claim is, of course, another matter entirely). The same also mentions the use of the Huracan stadium. Source: Argentina Shaken by Unprecedented Revival, July 1954

Hicks' time in Argentina is also mentioned in another academic source, along with the use of a soccer stadium:

Peron had an interview with Tommy Hicks, a Pentecostal faith-healer from the United States, and the government subsequently allowed him to use a soccer stadium for his healing campaigns. This occurred at the same time that Protestants were deprived of having meetings in public places.

The mention of restrictions on religious gatherings gives some clue as the background to all this, but the main - and increasingly acrimonious - conflict was between the Peron regime and the Catholic church. Unsurprisingly, the amount of publicity generated by Hicks caused much controversy and angered the Catholic church:

The Catholic reaction was immediate. The "Consortium of Catholic Medical Doctors'' published a letter denouncing the total lack of scientific control over Hicks's "miracles," as well as the irresponsibility demonstrated by the "surprising publicity" surrounding them.

The invitation to Hicks had much more to do with politics than with religion:

Perón's religious conceptions can hardly explain the official support for Pentecostals or Spiritists. In this broad, if superficial, endorsement of religious freedom one may divine intentions somewhat less than spiritual: the government wanted to associate itself with religious practices more openly Peronist than those of the Catholic church, where both allies and opponents - the latter increasing in number each day - could be found attending the same mass.

Not the answer you're looking for? Browse other questions tagged 20th-century christianity president religious-history argentina or ask your own question.

9
Did Radio Free Europe say that the Allies would come to the rescue during the Hungarian Revolution?