Is there art or written evidence of crescent shaped arrows being used for bird-hunting in Medieval Europe?

I have heard it said that crescent arrows were used for hunting birds in medieval Europe. I could not find any art or literary evidence for it, though. The art I found for bird hunting generally showed pointed arrows.

Is there any evidence for hunting with crescent arrows?

A pdf article here, Medieval Arrowheads from Oxfordshire, by Richard Wadge has some relevant information for your query.

An image (plate 2) gives us a classification for one type of crescent broadhead, the Jessop H2: 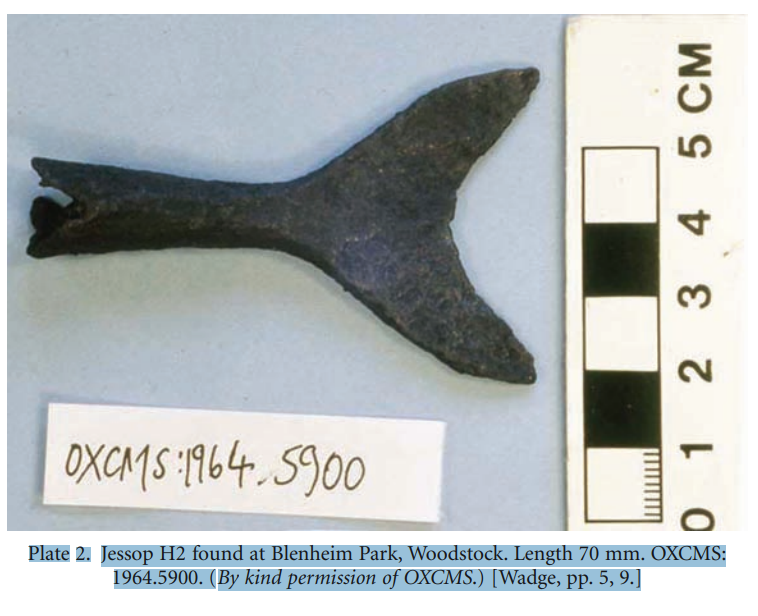 The H2 type of crescent or 'forker' broadhead is discussed here (all emphasis mine):

Two examples of the H2 type have been found in Oxfordshire, and are perhaps the oddest looking English hunting heads. One of them was found at Woodstock (see Plate 2). Both heads could have been shot from substantial bows as part of arrows made for repeated use, since they are pierced for retaining pins. The purpose of these heads was almost certainly for shooting birds, particularly large water birds, although they could also have been used for small game like rabbits. A more fanciful suggestion for the design of these heads is that they were used at sea for cutting rigging. While it has proved possible to cut ropes under tension with these heads, the practical likelihood of doing so from a moving ship, given the tendency of these heads to spin slowly, is extremely small. Rabbits, hares, and other animals were also hunted with blunt-headed arrows. A major problem when hunting birds, even large birds, and small game using arrows fitted with small sharply pointed heads like those discussed below, is that the arrow might pass partially through the game without knocking it down, although the arrow shaft might deliver the fatal blow. Pictures have appeared in the national and local press of large waterbirds, such as swans and geese, with pointed crossbow shafts stuck in them, but they were still able to feed, if not to fly. Secondly, arrows with sharply pointed heads are much easier to lose, since they go deeply into brush or can bury themselves in a grassy surface. These big crescent heads would be less likely to do either, because the head would catch on the brush or the ground, leaving the arrow lying on the surface. Since these heads could be fitted with retaining pins, it was more likely that the arrow would be recovered complete and ready for reuse.

So we have agreement by the author of Archery in Medieval England: Who Were the Bowmen of Crecy?, as well as an explanation as to the utility of this type of point for this application.

Not the answer you're looking for? Browse other questions tagged middle-ages weapons or ask your own question.

18
Was there any separation between hunting bow technology and weapon bows?
19
What English company founded in the 1200s filed for bankruptcy in the 2000s?
5
Is there historical evidence linking medieval forest clearences in Europe with the Medieval Warm Period?
15
What is known about how many Ulfberht swords exist?
10
What is the earliest evidence for the use of hearing aids?
10
Was Leo II of Armenia poisoned?
9
How much power and influence could a child monarch have?
26
How does this bird trap work?