Can you help identify this European military uniform and medals?

My husband and I moved into a house that was built in 1900 in Wisconsin. We found some old pictures down in the basement, and I'm curious if I can figure out who the couple is? I thought I could narrow it down by the military outfit and two medals the gentleman is wearing. I was told it was most likely European military based on the uniform. I know the medals are blurry, but any ideas what the two might be? No markings on the back of the picture.

Tried to do some research, and I have no idea if these relate the couple, but we did find another picture down in the basement in a similar frame. It was a picture of the last supper with words in Polish. The original owner of our house was Archie Bloodsworth (parents from Canada) who married Alice May Evans in 1889 (mother born in New York, father born in Wales). 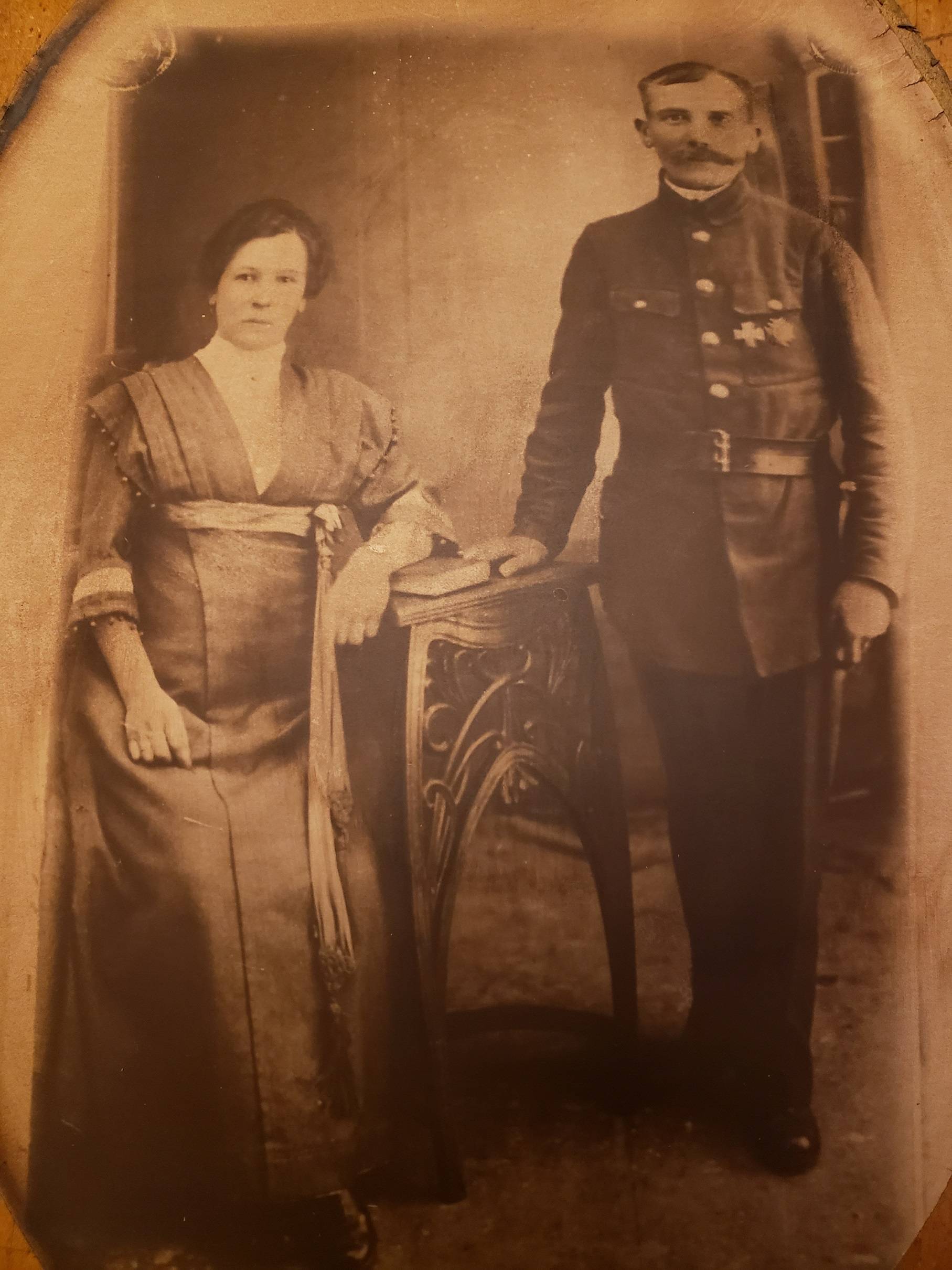 So the picture of the last supper in Polish was the ticket! I never paid close attention to it, but it's been hanging in my dining room for six years. I went online and was able to translate it last night. It is a First Communion certificate in Polish, given in my hometown of Wisconsin on May 9, 192_ to a Lladyslaw or Wladyslaw Parzych. I looked up Polish churches in my hometown, one was called St. Stanislaus, which lead to an article of Poles migrating to my area, and in the article, it said 187 parishioners from St Stanislaus joined an army of Polish Immigrants called Haller's Blue Army in WW1 (with approval from the USA government)!!! I don't believe the church is still in existence, but it is part of the Catholic Diocese, and there was contact info for an office administrator, so I just sent an email to see if they have any old records. Hopefully, I'll get a response back. I think I have the most solid lead yet! The men were known as Haller's Blue Army, and I also believe I identified the medal on the right. It's the Memorial Cross of the Veterans Association of the Polish Army in America. 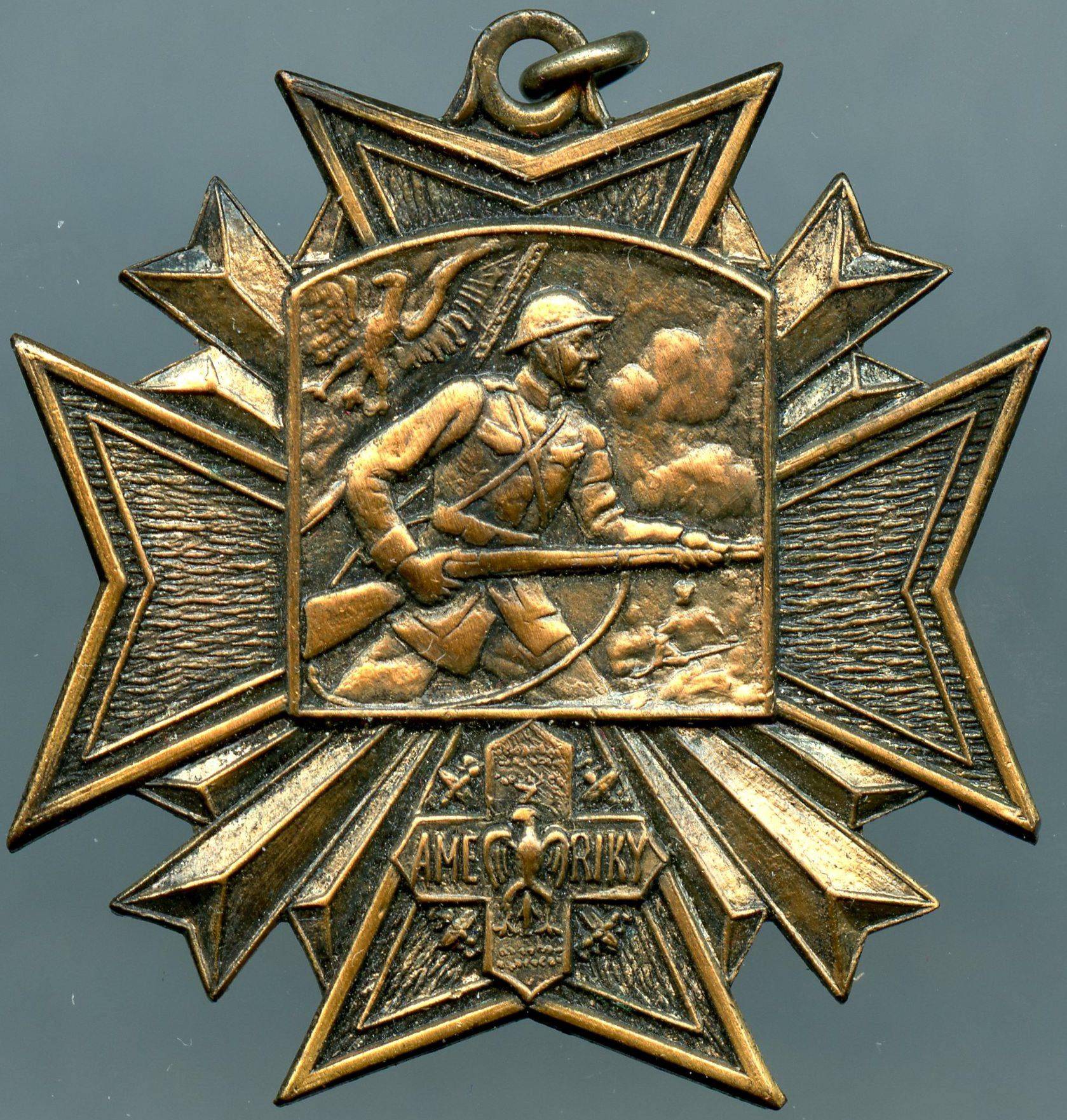 I found one mention of a Sjt. [sic] A. Bloodsworth in the 6 August, 1918, Supplement to the London Gazette (page 9234) (copied in the Edinburgh Gazette) under the heading:

His Majesty the KING has been graciously pleased to approve of the award of the Military Medal for bravery in the Field to the undermentioned Non-commissioned Officers and Men: ...
16802 Sjt A. Bloodsworth, Leic. R. (Leicester). 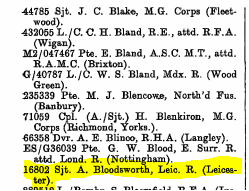 His Majesty the KING has been graciously pleased to approve of the award of the Meritorious Service Medal to the undermentioned Warrant Officers, Non-commissioned Officers and Men in recognition of valuable services rendered in connection with the war: ...
Indian Army ...
S./Sjt Blodoworth, A. J., Ind. Misc. List. 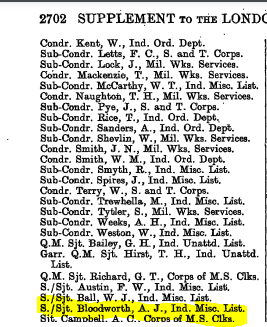 From Wikipedia for the Meritorious Service Medal:

The Meritorious Service Medal was instituted on 19 December 1845 for the British Army, to recognise meritorious service by non-commissioned officers. Recipients were also granted an annuity, the amount of which was based on rank. ... CRITERIA
To be awarded the MSM, an individual must have "good, faithful, valuable and meritorious service, with conduct judged to be irreproachable throughout". Other ranks must have at least twenty years service, must already hold Long Service and Good Conduct Medals, and for the Army and the Royal Air Force must have reached the equivalent rank of sergeant.

The second search termed up several junior officers named Bloodworth, but none with first initial A. or first name Archie. Likewise, none of te VC winners in either the Second Boer War or First World War were named either Bloodsworth or Bloodworth.

There were no results found regarding military service for either "Bloodsworth" or "Bloodworth*" covering the period around the Second Boer War.

The Royal Leicestershire Regiment lists both Bloodworth, Arthur E. - MM and Bloodsworth, A - MM under Army Number 16802 and serving in the First World War; so apparently even they are unsure of the correct spelling.

During the Second Boer War and First World War the Canadian Expeditionary Force was part of the British Army, and its awards and other distinctions were printed in the Gazette.

I believe the uniform is South Wales Borderers. I discovered there was a family that lived in our house for close to 60 years. Surnames within the family are Brennan (Brannan), O'Connor, Howard, Walsh, and Paulson. There was a Lance Corporal by the name of William Fredrick Howard (born Jan 26, 1889) who was in the South Wales Borderers, I found him listed on this website https://swb1914.uk/index.php/the-1st-battalion/regular-1/, and I'm currently looking to see if he won any medals. I will keep you posted. 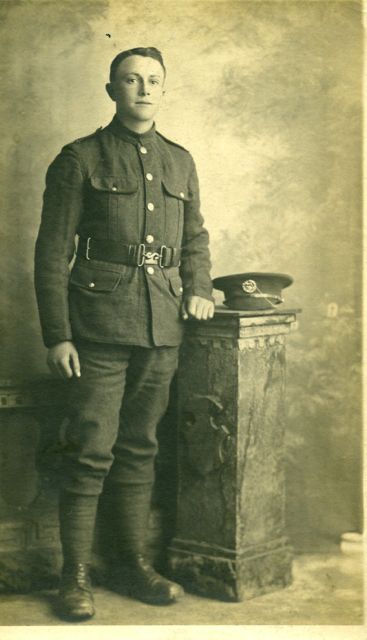 Not the answer you're looking for? Browse other questions tagged military identification europe or ask your own question.