Could there be frozen animals under Antarctica's ice sheets?

Similar to how we occassionally dig up frozen mammoths from the Siberian permafrost, could there be animals and plants frozen under the Antarctic ice sheets? I understand that at various times in the past Antarctica was surprisingly temperate.

I guess a lot would have been destroyed by the action of the glaciers, but there might also be some eddies or protected locations down there.

Depending on when Antartica froze up, if there are frozen animals under the ice, what kind of animals might we expect to find? Are we talking dinosaurs, giant marsupials, or only wingless flies?

Possibly - but neither dinosaurs nor woolly mammoths.

However glacial movement severely restricts where any such might be found. Below is a map of current movement rates for Antarctica's glaciers, and only in the deep blue zones of the interior, with movement rates of 0 metres per year, could there be any remnants frozen for over 34 million years. 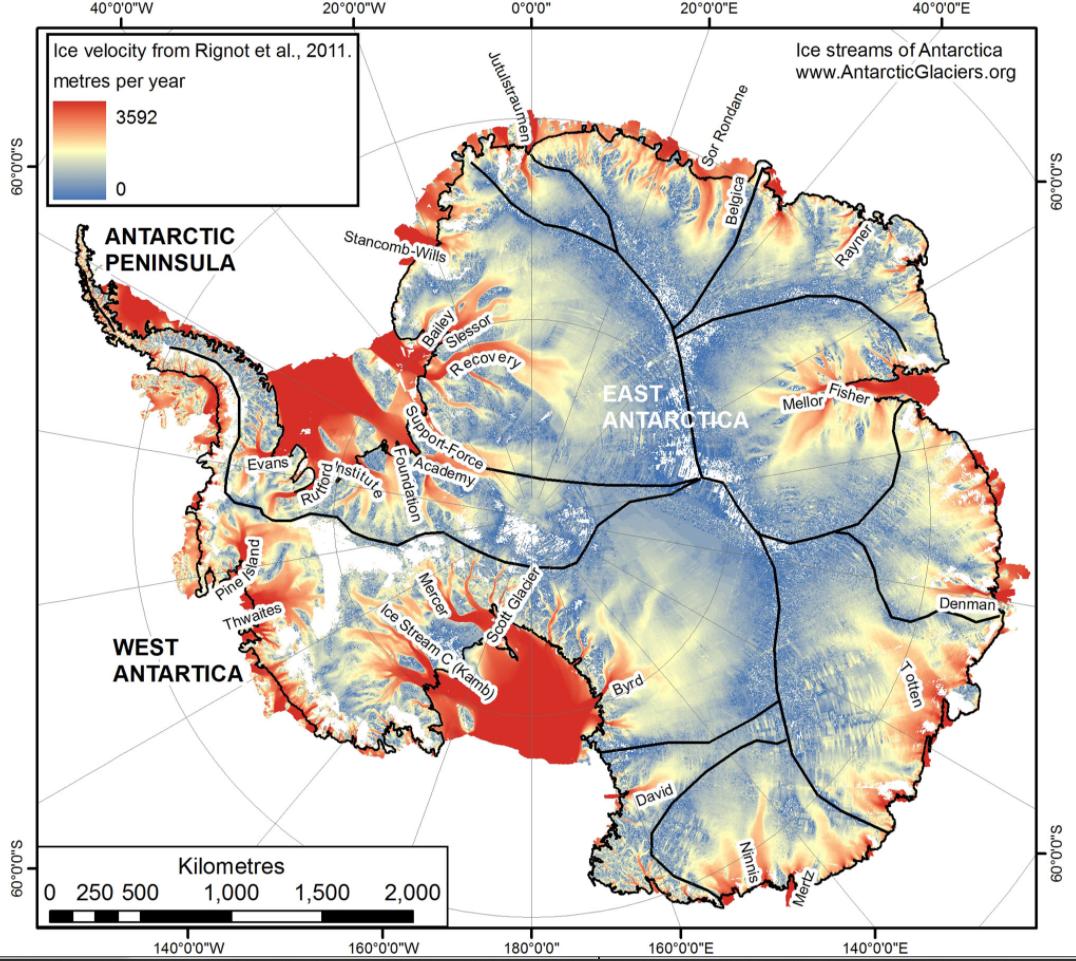 To the best of my knowledge, there's no definitive information on what Antarctica's fauna consisted of beyond inter- and extra-polation from other continents. This time period, after extinction of the dinosaurs and before Antarctica froze over, is the Eocene. One could make some guesses about possible frozen Antarctic fauna based on that estimation.

Dinosaur fossils have already been found in Antarctica.

Fossils of Amphibian and reptiles from the Triassic period, 250-245 million years ago, were found at several sites near the Beardmore and Shackleton glaciers.

During the 1970s, work on these Early Triassic fossils revealed that some are the same species as those found from the same time period on other continents—proof that these land masses had all once been connected together to form Pangaea, a super-continent and “superhighway” for migrating animals.

Fossil finds during the 1980s and 1990s showed that by the Middle Triassic period, 245 – 235 million years ago, some species were unique to Antarctica. Apparently, resources had become abundant enough to sustain permanent populations, and over time, these animals had gradually evolved and adapted to the local environment.

In 1990-91, scientists made the first discoveries of dinosaur fossils in the central Transantarctic Mountains of Antarctica. A site on Mt. Kirkpatrick, near the Beardmore Glacier, yielded the bones of Cryolophosaurus ellioti, a species wholly new to science. Alongside this specimen were the bones of a pterosaur (flying reptile), a tritylodont (mammal-like reptile), and another dinosaur later recognized as the new species Glacialisaurus hammeri.

All proved to be unique to Antarctica—evidence that by this point in time, barriers were preventing populations from exchanging genes across Pangaea. Additional excavations in 2003 on Mt. Kirkpatrick uncovered more bones of Cryolophosaurus at the original site, and bones of another Glacialisaurus (or perhaps a new dinosaur species) at a new site.

Antarctic fossil could have been the biggest flying bird ever, study finds - in the 1980s fossils of pelagornithids were discovered. They are known as "bony-toothed" birds because of their sharp teeth and long beaks, which helped them grab fish and squid from the ocean. The birds were huge, with wingspans reaching up to 21 feet (6.4 meters).

the foot bone dates back 50 million years, and the jaw bone is around 40 million years old -- evidence that the birds emerged in the Cenozoic Era, after an asteroid struck Earth and wiped out nearly all dinosaurs.

The bones and teeth of mammals, including marsupials, have been found on Seymour Island in Antarctica. One of the marsupials discovered in the 40 million year old rocks of Seymour Island belonged to the family Polydolopidae, a rat-size creature so far characterised only by a remaining fragment of its jawbone and a few teeth.

The evidence of marsupials in Antarctica is widely supported by fossils, whether more recent animals (still millions of years ago) have been preserved under the Antarctic ice is still unknown. Maybe global warming will reveal something in the future.

Not the answer you're looking for? Browse other questions tagged archaeology antarctica or ask your own question.

28
Why were there no agricultural, city-state forming civilizations in the Ice Age?