What time period is this uniform?

I know this person was a family member. I have family on this side who served in the Civil War as well as WWI and WWII. I identified the hat pin as Infantry, 8th Regiment, Company B. Also, I think it is after the Civil War because of the crossed rifles on the hat plus the quality of the photo.

I would like to know the approximate year this uniform was worn and the type of medals pinned to his uniform. It will help me identify the person.

Thank you for any help you can provide!

This uniform is from the 1902 regulations effective in 1903. The cap is a dead giveaway, an improvement over the 1895 regulation cap, the 1902 was a further step towards the modern army uniform. For the 1895, see page 93 from Repository.si.edu

Can’t seem to find a photo of print of the 1902 undress/garrison uniform except in the new khaki, but here is a nice print of the enlisted full dress showing the full dress cap with the light blue band. The undress cap would not have the band. xenophon.mil.org Looking close, you can see the difference in general cap design vice the 1895. The artist here was one Henry Ogden, pretty much the go-to guy for accurate prints of US Army uniforms up to about 1907. There’s a couple of really nice volumes of his prints covering from the American Revolution up to 1907 if you can get your hands on them – I’ve had mine for about 50 years. The text (from my volume) for the print reads:

Figure 1 Corporal - This non-commissioned officer wears a narrower trouser stripe than the higher ranking sergeant to his left. The breast cord worn by all enlisted men during this period was taken from the dress uniform of the Civil War artilleryman insofar as styling is concerned.

Figure 3 Private - Performing guard duty in the near distance is the lowly infantry private.

Figure 4 Musician - Also called trumpeter or bugler, this soldier with hand on hip lets his instrument hang from the blue cord signifying infantry service. He wears the two narrow stripe trouser stripes common to the bugler.

Figure 5 Sergeant - The sergeant wears a diagonal gold strip awarded to soldiers suffering a war wound. In addition to the would stripe, he wears one for wartime service.

The difference between the undress/garrison uniform and the field uniform would replacing the unadorned cap with a slouch hat. Note the coats and service belts as seen in the OP. The slouch hat was required for both garrison and field when stationed in the Philippines for enlisted personnel.

Below, two photos from U G McAlexander’s History of the Thirteenth Regiment United States Infantry (1905), B Company 13th US Infantry in dress uniform and C Company in field uniform. In the C Company photo, note the coats and service belts as seen in the OP and the officer wearing the khaki colored garrison cap.

Medals related to recognized military fraternal organizations, including those for the descendants of same, were permitted in regulation at least up through the 1912 regulations. 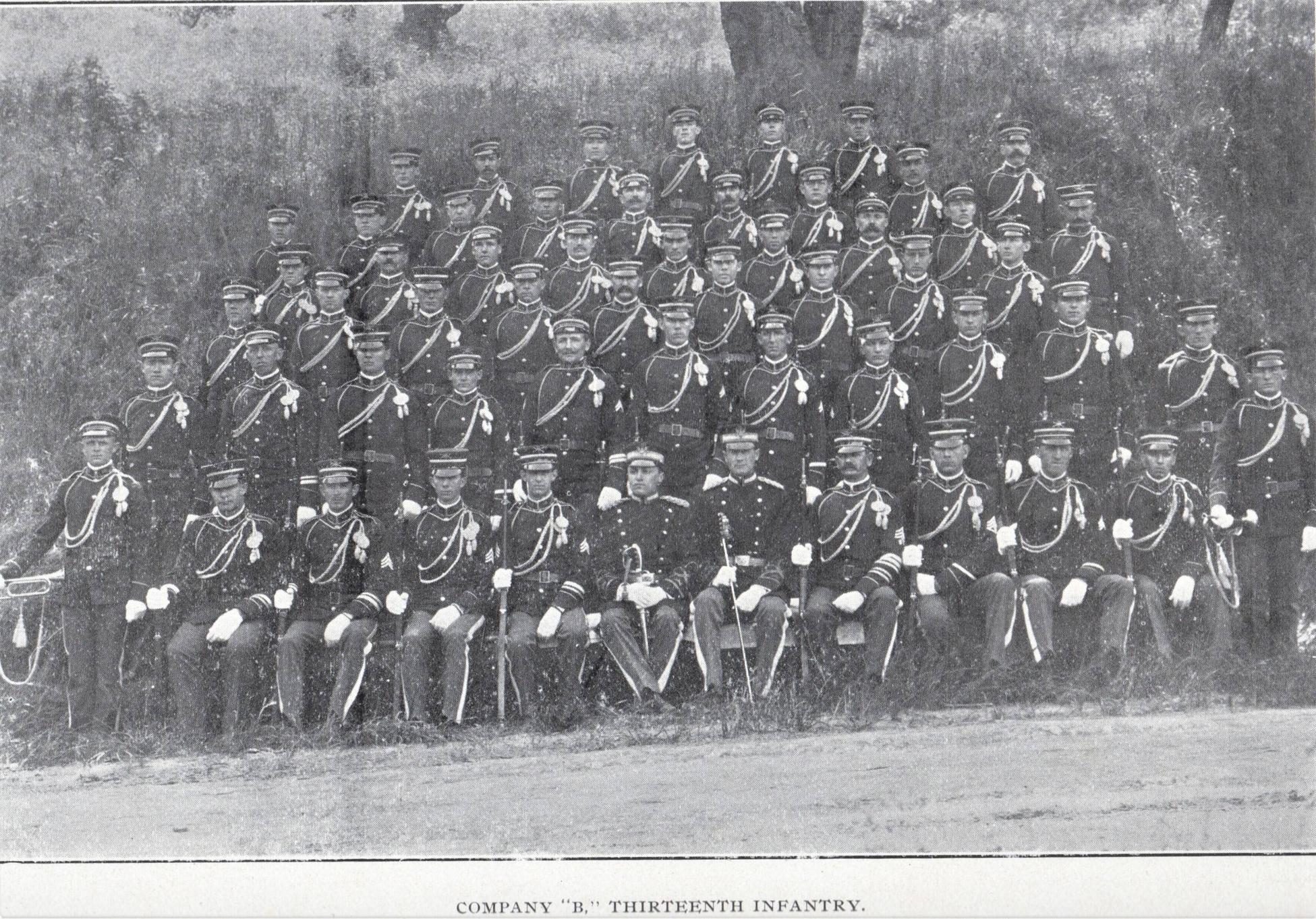 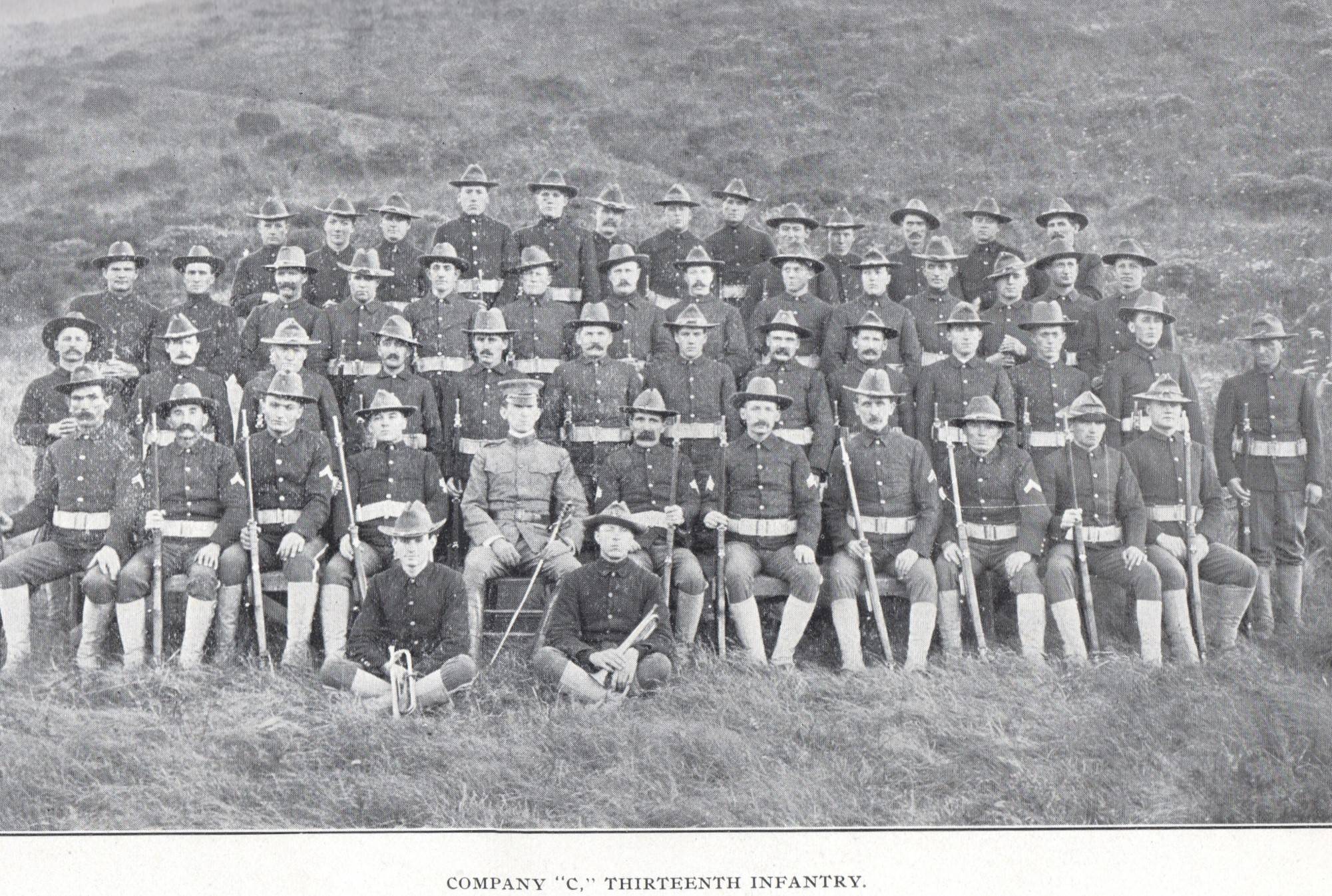 A few notes to help with identification.

The uniform seems a very plain one, though with a dress shirt under the jacket.

The belt looks distinctive. An expert on military gear should be able to deduce when such a belt would be in use.

That style of cap would have been used during different periods by members of different organizations.

Not the answer you're looking for? Browse other questions tagged military identification uniform infantry or ask your own question.

0
Can you identify this uniform?

6
What uniform is this?
12
Who is this, probably royal, teenager?
3
Can anyone identify this uniform? Time period is 1841
15
Based on his service record, where was this soldier deployed in WW2?
3
What is this Victorian era British uniform?
3
Can anyone help me identify my grandfather's uniform?
8
What regiment is this (~1826-1861) French cuirass cavalry uniform?
27
Identify the circa 1920 uniform in this photo