Did Franco ever refer to his regime as Fascist?

Italy certainly started out using the term, which is derived from Senatorial regalia.

Hitler's Germany can also pretty safely be classified as such, that's the regime most people have in mind when referring to Fasciscm.

However, did Franco ever refer to his regime as Fascist, at least during the time when the term had some level of appeal?

I am not looking to equate Franco's regime, as bad as it was, to Hitler's. Only wondering if he, or his government, used the term "Fascism" from Mussolini and Hitler, with whom he had somewhat cordial relations and which started out as equivalently authoritarian/militaristic.

Edit re. "most people"

While this is admittedly a sloppy term, there is a strong association in the public mind of Fascism with Hitler's Germany.

Google's ngram are not applicable, but, when searching Google itself, you can see that my claim, while sloppy, has some validity: 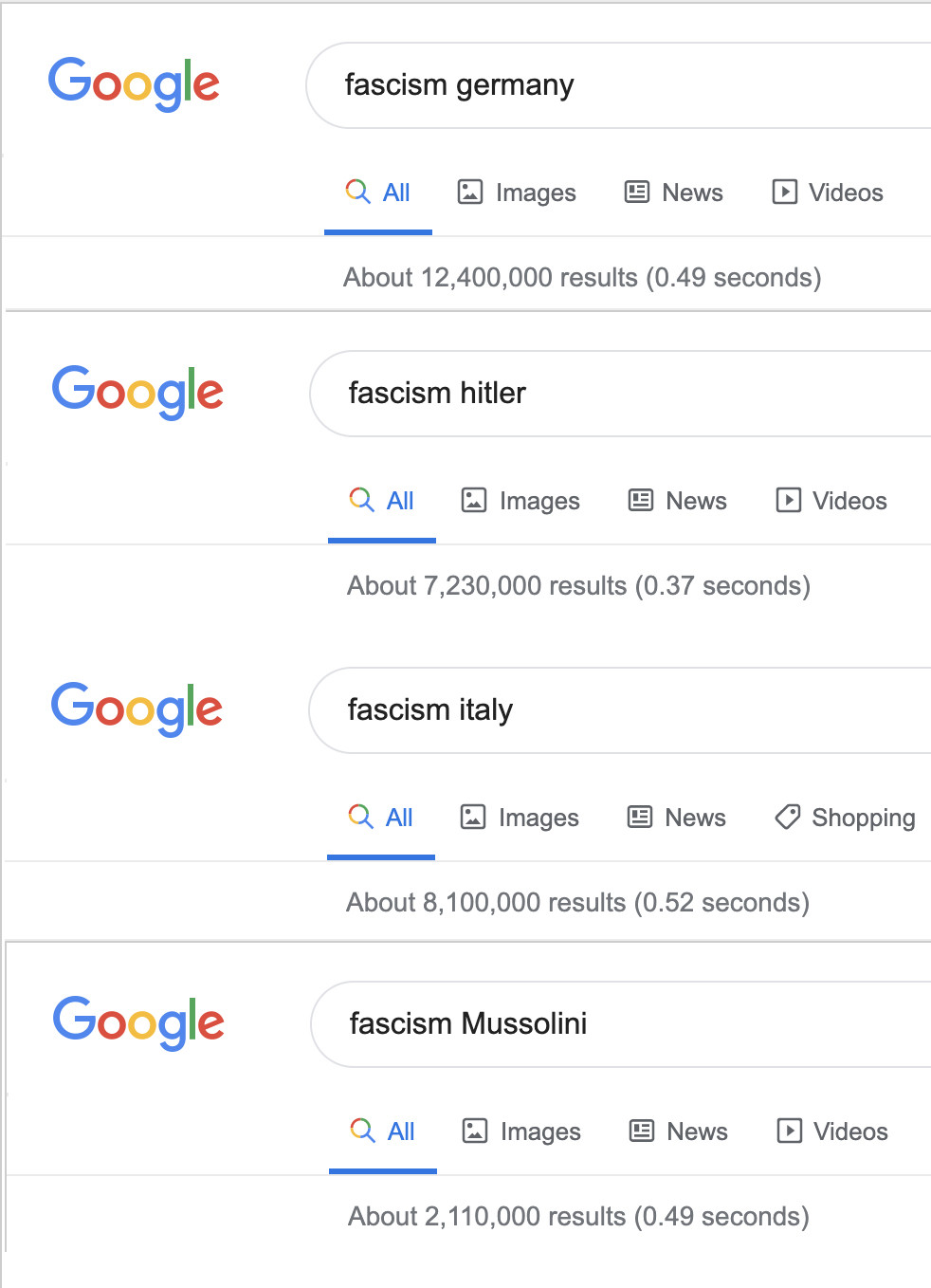 No. Franco was a Falangist, and called himself that. (In real life more of a military opportunist, who grabbed his chance.) Fascists were the followers of Mussolini. Hitler was a National-Socialist. Each saw themselves as distinctly different from the other.

Fascist became the generic term for all of them after WW2. Mainly because international socialists were painfully aware how close the words national and international are. Today the term Fascists is essentially meaningless. Just about anybody - regardless of whatever political affiliation - can and has been branded fascist. Even Trotski was called a fascist (by Stalin, I think).

Please follow the link on Trotksi, for a good laugh. I didn't add it because it is a serious article (more the opposite) but to show just about anyone can be called Fascist.

The evidence from Franco's own statements strongly suggests that he did not, at least in public. In fact, from 1937, he specifically rejected the term for the Falangists, though he did concede that there were fascists within the movement. He also came close to using the word 'fascist' in a speech in 1938 but deleted it in the final version.

Franco had declared that it was not a matter of the Falange being a “Fascist” movement: “The Falange has not declared itself fascist; its founder [ José Antonio Primo de Rivera ] declared so himself.” Thereafter, the custom within the Nationalist zone, especially among the press in the first months, of calling the Falangists and some other groups “Fascists” was abandoned. All that Franco had been willing to admit before the unification [of the Falangists and the Carlists] was that the supposedly non-Fascist character of the Falange “does not mean that there are not individual fascists … within it.”

Nonetheless, Franco's beliefs - and those of the National Movement, as well as its propaganda - were far from being entirely divorced from fascism and, in July 1938, he almost used the word in a speech (my emphasis):

Franco’s language became somewhat more “Fascist” during 1938 and 1939. In the draft of his speech for July 18, 1938, commemorating the second anniversary of the National Movement, he applied the adjective “Fascist” to his regime and, more extravagantly, to the Catholic monarchs but decided to delete it from the final version.

Note also that Franco was influenced both by the Catholic Church and by monarchists. In fact, even before the end of the civil war, he had spoken of the possibility of eventually restoring the monarchy, and he had strongly opposed the deposing of Alphonso XIII in 1931.

Franco was for all intents and purposes a fascist.

As Jos pointed out, the official (English) name of his party was "Falangist", which refers to a "phalanx" and indirectly, military rule. But the Wikipedia article points out that Franco took the title "National Chief" which was a "fascist" designation.

Not the answer you're looking for? Browse other questions tagged spain fascism or ask your own question.

3
Why is Nazi Germany called a "fascist" regime?

8
Did Franco really ask "Why? Are they going somewhere?"
14
Did the Socialist and the Fascist party share the electoral programme in Italy?
12
Did Franco consider Hitler a "son of the Catholic Church" who "died while defending Christianity"?
5
Did Hitler get called a fascist by his opponents within Germany? Did he or other Nazis have a problem with that?
2
What did the word "fascist" mean in an early 1930's novel set in Italy?
21
What did Hitler mean with the following statement about Franco?
11
Why did Francisco Franco never reestablish the Spanish monarchy?
19
Did the Allies try to "bribe" Franco to join them in World War II?