Is the use of flamethrower style naval weapons depicted in this game accurate?

In the popular strategy game Age of Empires 2, one key naval unit is the so-called Fire Ship. Fire ships in the game use a siphon to launch a continuous stream of fire projectiles on the enemy. 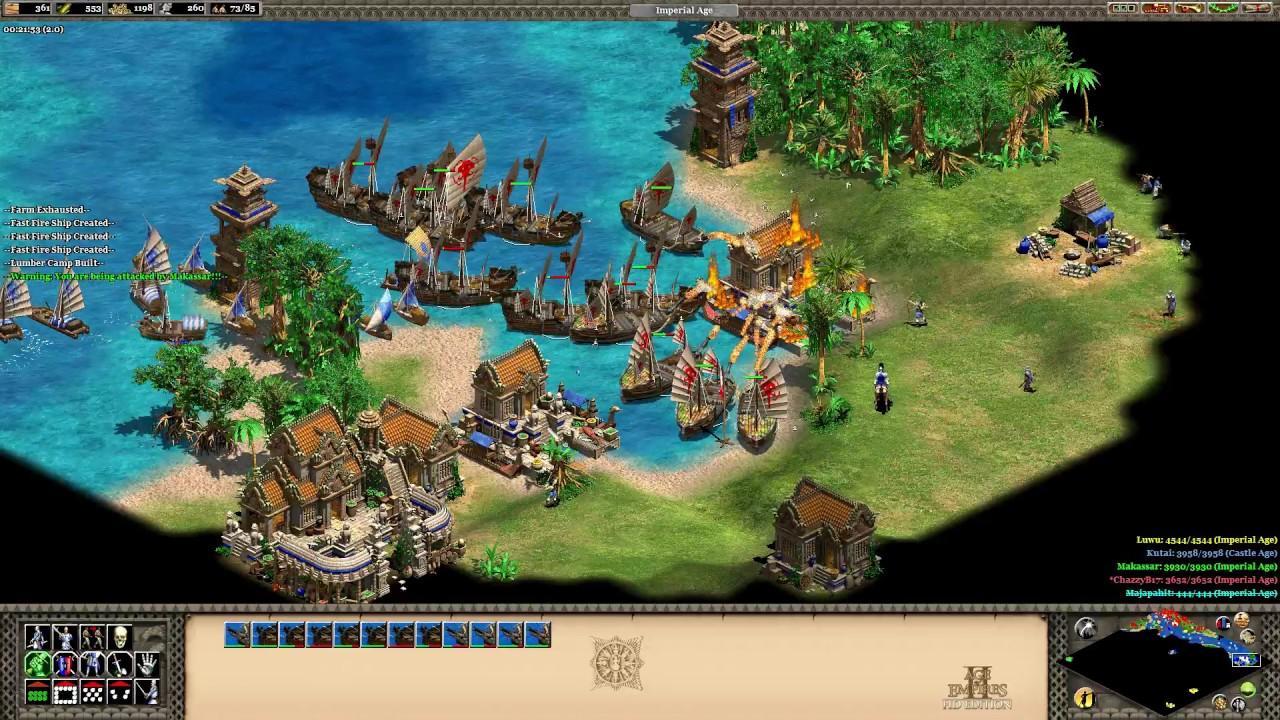 However, this looks to me more like a typical Byzantine dromon equiped with Greek fire. 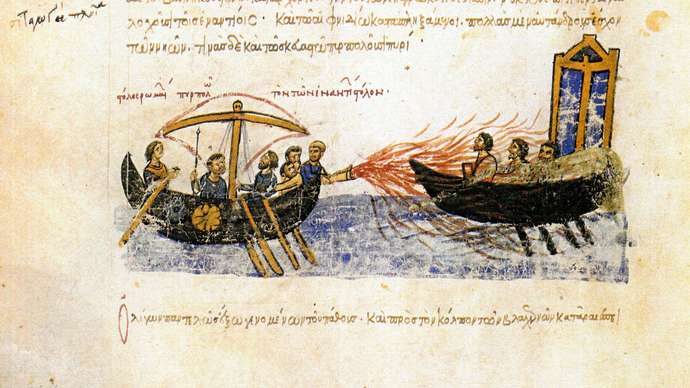 ...the Byzantines could not avoid capture of their precious secret weapon: the Arabs captured at least one fireship intact in 827, and the Bulgars captured several siphōns and much of the substance itself in 812/814. This, however, was apparently not enough to allow their enemies to copy it. The Arabs, for instance, employed a variety of incendiary substances similar to the Byzantine weapon, but they were never able to copy the Byzantine method of deployment by siphōn, and used catapults and grenades instead.

Additionally I searched about fire ships which I gather historically were used more as the again in-game demolition ships, and exploded on contact with enemy ships rather than use flamethrowers.

Then my search on thermal weapons was more interesting as it states that:

Similar petroleum and bitumen-based incendiary mixtures had been known for centuries before the invention of Greek fire, but this new recipe created a blaze which was extremely difficult to extinguish. It burned on water, and was used effectively in naval warfare, although it was primarily an anti-personnel weapon rather than a ship-burner. It remained effective at sea even after its use had declined on land after the 13th century. The Greek fire recipes continued to be developed over the centuries, and by the High Middle Ages was much more sophisticated than the early versions.

Duarte Barbosa ca. 1514 listed weapons made by Javanese people, including Greek fire. Zhang Xie in Dong Xi Yang Kao (1618) mentioned that city of Palembang, which has been conquered by Javanese, produces the furious fiery oil (ming huo yu), which according to the Hua I Kao is a kind of tree secretion (shu chin), and is also called mud oil (ni yu).

It much resemble camphor, and can corrode human flesh. When ignited and thrown on water, its light and flame become all the more intense. The barbarians use it as a fire-weapon and produce great conflagrations in which sails, bulwarks, upperworks and oars all catch fire and cannot withstand it. Fishes and tortoises coming in contact with it cannot escape from being scorched.

As such, this seems to indicate that some form of flamethrowing weapon was in naval use in the east although the delivery system somewhat differs from the one depicted in the game. The above extracts do not confirm, as I understand it, the use of naval weaponry, similar to the Greek fire, by Western European powers.

From the game's wiki the following claim is made:

Other civilizations acquired the secret of Greek fire at times, but it was so closely guarded and dangerous to use that it is lost today.

Therefore, what I whould like to ask is, if there are documented cases of Greek-fire, wildfire, or any relevant weaponry with a delivery system similar to that of a Byzantine dromon in Western European naval warfare.

Greatly exaggerated, but basically correct for a video game.

You are correct that a fire ship is a ship deliberately set on fire, and possibly filled with explosives, and sent into an enemy fleet to set fires or to simply cause chaos. They were a powerful tactic against an enemy fleet in port to force a battle. They have been used through naval history.

How historically accurate is the use of flamethrower-style naval weaponry from states in Western Europe during the 1000-1400 AD time period.

Thucydides reports the use of some sort of flamethrower to set fire to Delium in 424 BC, though that was a land battle.

Battle at sea in this era was largely fought as little land battles with ramming and boarding being prominent. A ship's have fore and after "castle" was literally that, tall, heavily fortified towers on the fore and aft of a ship which could dominate the decks below. These fights could take days as in the final battle of HMS Revenge (1591). It makes sense that sailors would adapt the very terrifying, but very short ranged, flamethrower to naval combat. The 12th Century Madrid Skylitzes depicts naval flame throwers used by the Byzantines.

However, this was not a common practice. It existed, but not in numbers depicted in game. By 1000 its use was already waning. Throwing flaming pots with conventional artillery (ie. catapults) would be much more practical, and cannon would soon be common.

Using hand pumped pistons, they would not have the range to shoot flame against targets on the shore, maybe cinders could start fires on rooftops if the wind was strongly in their favor. Modern man-portable flamethrowers have a short range of about 20 meters. The game depicts something closer to a modern vehicle mounted flame thrower which can have an effective range of 100 to 200 meters.

Their version of the Madrid Skylitzes is the Wujing Zongyao which depicts various fire weapons and a pumped flamethrower with detailed instructions.

The Battle of Langshan Jiang (919) featured use of a pumped flamethrower, taking care to be upwind of their target. The Song Dynasty made use of flamethrowers for centuries.

They would be more common than in the west, but not a common feature of naval battles.

Not the answer you're looking for? Browse other questions tagged middle-ages naval weapons historical-accuracy or ask your own question.

15
What is known about how many Ulfberht swords exist?
11
What was the actual cause of the disaster for the Royal Navy’s battlecruisers in the Battle of Jutland?
11
Did the ancient Greeks ban the gastraphetes?
9
Which US naval ship from 1905 is depicted on this photo?
12
In World War II, why was the ratio of killed to wounded of the Royal Navy twice that of the US Navy?
17
Why didn't the steppe bow spread further?
86
Why did the British scuttle the u-boats surrendered after WWII?
23
Did Henry V’s archers at Agincourt fight with no pants / breeches on because of dysentery?
7
What weapon systems have come and gone very quickly?