What organization/agency/unit wore this uniform?

The woman in the attached photo worked as a teletype operator for the Army Air Corps on Geiger Field, near Spokane, Washington 1941-44. I don’t believe that she was enlisted, but worked in a civilian capacity. Can the uniform identify the organization/agency/etc. that she worked for? 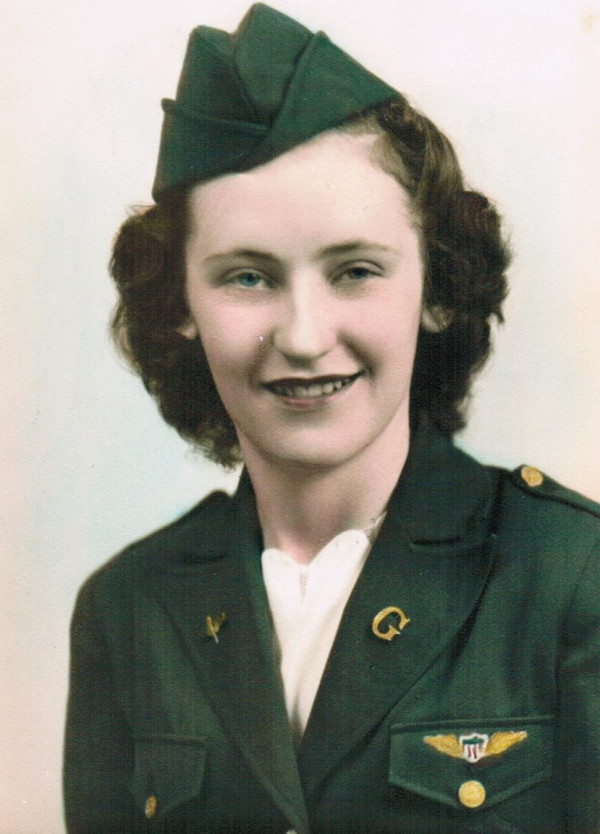 In WW2 and for some time thereafter, one can even find use today by DOD employees, the standard “Civilian Uniform” for civilian employees was the army green uniform (in the vernacular “pinks and greens”, the difference being instead of army lapel brass and rank insignia there was worn a blue cloth triangle, with the embroidered letters “US” centered thereon, on both lapels (see OCLC) where the actual military personnel, enlisted, wore a brass “US” on the right lapel and branch insignia on the left while officers wore “US” on both upper lapels with branch insignia on the lower lapel. The civilian employee uniform was normally only worn overseas, not on continental stations, normally associated those employed as civilian administrative types in the post war occupation forces. The apparent wear of these civilian employee uniforms was for ready identification of their status among the occupying forces.

The picture in the OP shows none of these. There is an officer's USAAF lapel branch wings device on the right side and a G on the left in the lapels. The apparently embroidered wings on the breast pocket are not an authorized article of uniform (note that real wings, of embroidered or, more commonly metal, on a USAAF uniform - or USN for that matter - are worn above the pocket). The G is meaningless, one can only presume, generously, that it perhaps refers to Geiger Army Airfield.

The outfit shown is not of a type authorized for use in the Womens Army Auxiliary Corps (WAAC) nor the later Womens Army Corps (WAC). Their uniform was essentially a female version in the same colors as those for male personnel with authorized distinctive insignia with rank markings as for males. See womenshistory.org.

Further, the well-known Women Airforce Service Pilots (WASP) uniform was of a medium blue color, not the regular olive green shades, and had its own distinctive and authorized insignia. See Smithsonian and WingsAcrossAmerica Further, they, WASPs, did not wear the overseas type cap as the lady in the OP; and her cap, indeed, is of a non-regulation pattern.

The outfit shown, especially in the blouse and coat combination, appears to be just a clever imitation, a locally produced item indicative of solidarity with the war effort, or perhaps the uniform of some civilian contractor, but is not a regulation US uniform.

Not the answer you're looking for? Browse other questions tagged world-war-two identification photograph or ask your own question.