Why did life expectancy decline sharply in 16th century England?

I was checking historical life expectancy and found the chart shown below in Roser, Ortiz-Ospina, Ritchie, 2013.

What was the reason for such a dramatic decline in life expectancy in England in the middle of the 16th century?

Is this just a data glitch or was there a major war or plague at that time? I could not find anything that would explain such a dramatic decline. 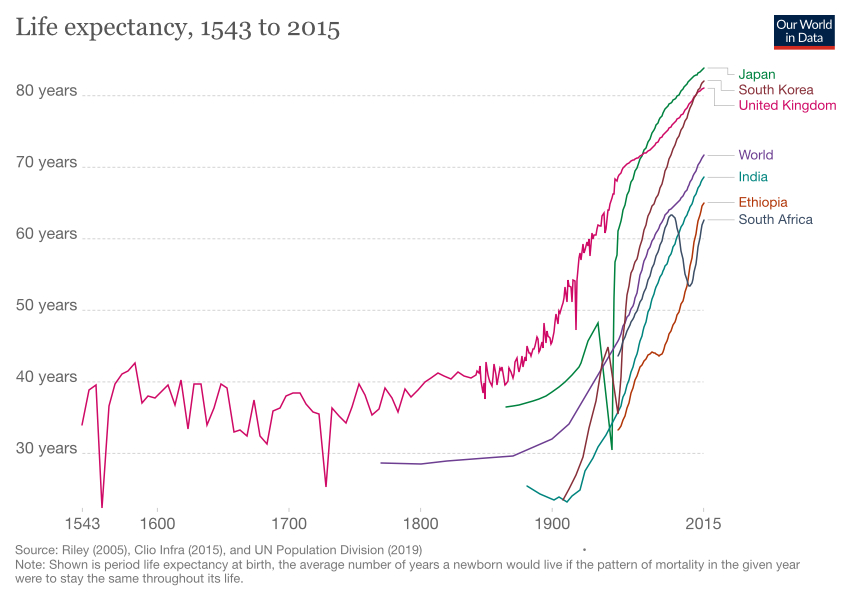 This was primarily due to the 1557 influenza pandemic, which returned in 1558 and perhaps lingered for another year or two. This was a global pandemic and other areas of Europe were also severely hit. Making things even worse was that the influenza was preceded by plague, typhus, measles (hat tip: Rusl) and famine in some regions of Europe.

Influenza significantly contributed to England's unusually high death rates for 1557–58: Data compiled on over 100 parishes in England found that the mortality rates increased by up to 60% in some areas during the flu epidemic...

This pandemic was a global one and

was highly fatal, with deaths recorded as being due to pleurisy and fatal peripneumony. It first infested Asia, then Constantinople, and having spread all over Europe, afterwards attacked America. Before autumn 1557, it simultaneously hit all parts of Spain so quickly that: «the greater part of the population in that Kingdom were seized with it almost on the same day»

Thomas Short described the epidemic based on contemporary reports, the disease: «came from the land Melite in Africa, into Sicily; so into Spain, and Italy […]. It attacked at once, and raged all over Europe, not missing a family and scarce a person.

A Note on Life Expectancy

Note that the life expectancy figures quickly rose again, and that the source of the data in the question states that:

Shown is period life expectancy at birth, the average number of years a newborn would live if the pattern of mortality in the given year were to stay the same throughout its life.

or, to put it in a slightly different way,

The statistic “Life expectancy at birth” actually refers to the average number of years a newborn is expected to live if mortality patterns at the time of its birth remain constant in the future. In other words, it’s looking at the number of people of different ages dying that year, and provides a snapshot of these overall “mortality characteristics” that year for the population.

Also worth noting is that the 1557 pandemic was not the first, but it is better documented than the ones that came before it:

...although influenza has been known in Europe since the middle of the 13th century and there are some records documenting six visitations in the 14th century, and four in the 15th, it only began to be studied by the profession from the start of the following century. Only then records of erupted epidemics appeared, together with the circumstances which attended their outbreak and progression, and their characteristic symptoms.

Not the answer you're looking for? Browse other questions tagged england united-kingdom 16th-century population or ask your own question.