Why was the Ottoman flag changed from an eight-pointed star to five-pointed in the 19th century?

According to Wikipedia, alongside the crescent, the flag of the Ottoman empire had an eight-pointed star until 1844 or so, when the star was changed to five points.

It seems the eight-pointed star was of Byzantine (and before that Hellenistic) origin as it showed up on Byzantine coinage and some earlier coins.

Was there some kind of official reason provided or some (more or less official) debate recorded on the matter of the Ottoman change to five points in the 19th century?

There appears to be some mystery around how English Wikipedia can be so certain about the unreferenced assertion. It seems rather certain that the five-pointed star was introduced in several forms onto flags before, but only made into standardised law in 1936. Before that, the information available seems too confusing as to how many points the star really had in which application to draw any firm conclusion about this.

We see evidence for eight, seven, six and five pointed stars in use during the 19th century. The Ottoman flag (naval, land military, coat-of-arms, national flag?) seems generally to have just called for 'a star and crescent'? Although, even the latter reduced requirements seem to have had any star as optional at times.

In the early period, the number of corners of the star in the flag is not clear; Apart from the 5-pointed star, different stars have also been used. For example, in Colton's 1862 book Delineation of Flags of All Nations, the flag is shown with an 8-pointed star. Steenbergen's Vlaggen van alle Natiën book, published in the same year, used a 6-pointed star. The use of the crescent and star flag (five-pointed star) in the later years of the empire was well documented by photographs. In addition, there are state records that the flag of the Ottoman Empire in the later period was called the Moon-Star.
— Osmanlı bayrağı

And on a vexillology site even:

National flag There was an Ottoman flag with crescent and seven-pointed star. Several sources report that the star was later replaced by a five-pointed one, without providing any evidence. Indeed, the five-pointed star has always been present in the Imperial flag.
The five-pointed star had always pointed to the hoist, as show some flag charts, and also Turkish charts of 1857 and 1905.

Zanamierowski [zna99] gives 1793 as the date for the introduction of the red flag with white crescent and star (presumably as some sort of flag for national identity) and 1844 for the change from an eight-pointed to a five-pointed star, without providing any evidence, either

On that site, where we see the Colton image from 1863 reproduced:

The flag is red with a white crescent and star at hoist. The star is eight-pointed. Above it, there is a long narrow red pennant with two long tails, looking like a modern masthead pennant.

A scan of Colton looks like this, in the 1874 edition of the General Atlas: 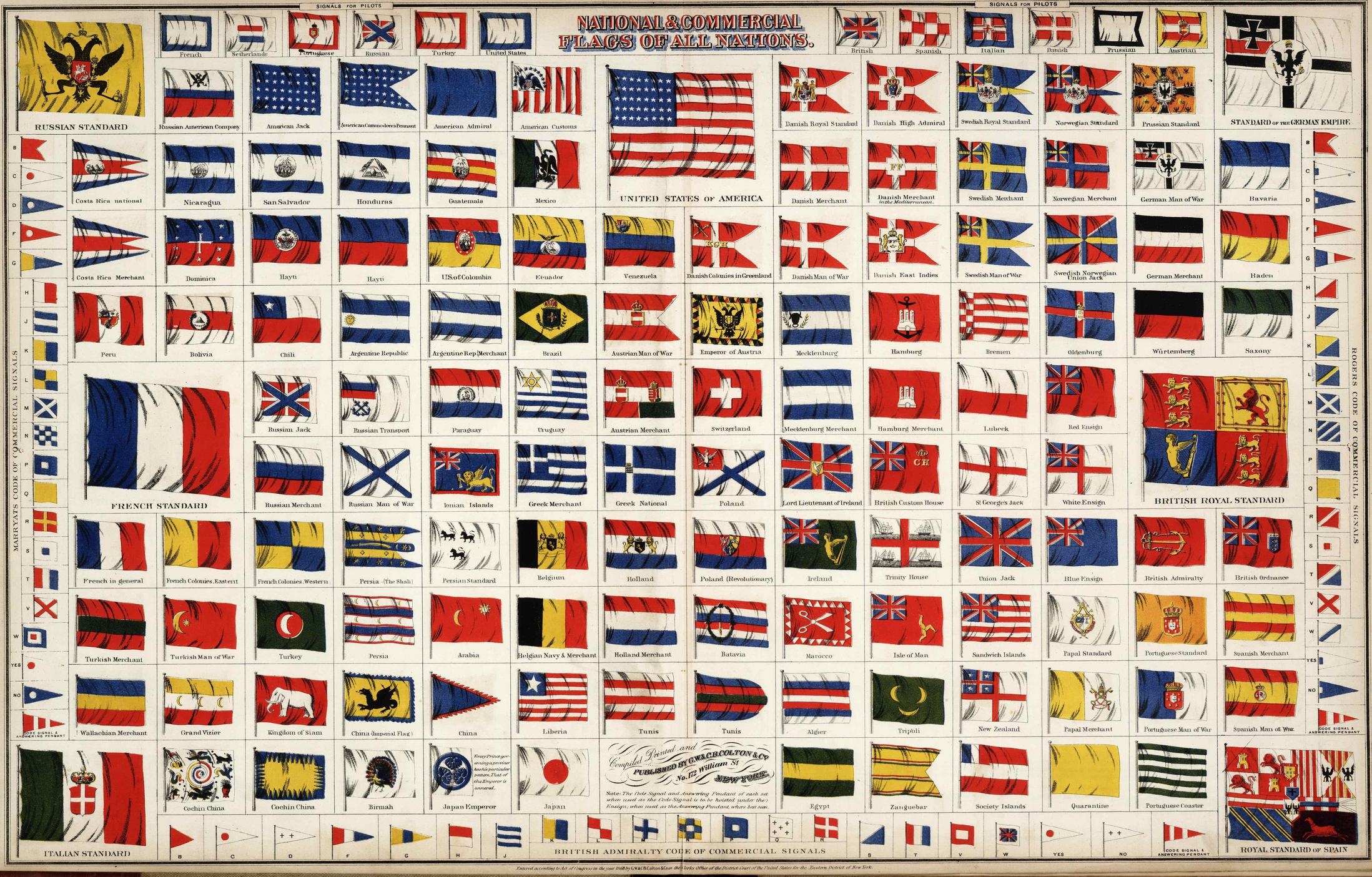 While indeed such authorities on the subject of vexillology like

— Tim Marshall: "A Flag Worth Dying For. The Power and Politics of National Symbols", Scribner, 2016. — Alfred Znamierowski: "Flags through the ages : a guide to the world of flags, banners, standards and ensigns", Southwater: London, 2000.

repeat the exact story of eight-pointed star adopted in 1793 and changed to 5 in 1844, quite Wikipedia-like – without giving evidence. But we still later see in naval application stars with even more points: the sunburst, in various iterations.

In a specialist paper we see that one part of the mystery seems to stem from at first only the captain pasha's flag vessel hoisting an eight-pointed star with a crescent:

The last chart in Halis Effendi’s album is dedicated to flags bearing crescents and stars. For the first time we can see that the symbols of crescent and star were used exclusively for Imperial or State symbols. Even Sultan Selim HI abandoned the traditional symbol of a red flag with three golden crescents in 1518 and established a new symbol for himself - a red fleld with a white tugra, a calligraphic rendition of the sultan’s name. The Ottoman flag hoisted on the ship of the captain pasha was red with three white crescents and an eight-pointed star. The flag at the stern of other vessels was of two types. A monochromatic flag (originally red, later green, and now again red) had been introduced during the reign of Ahmed III (1703-1730) by his Vizier Nev§ehirli Ibrahim Pasha. This plain flag was reserved for Turkish vessels after Nizam-i Cedid, while vessels from beyliks used the second type of ensign, a red rectangle charged with a white crescent and the eight-pointed star. When in the form of a guidon hoisted on the gaff of the midmast, it indicated the ship of the squadron commander. Halis Effendi’s Album is the first complete Ottoman work dealing with flags used in the Ottoman navy.
— Jaroslav Martykan: "A history of Ottoman naval flags", Proc XVII International Congress of Vexillology, 1999.

Even more then is to see both flags in use at the same time, 'captain pasha naval flag' to the right:

As a sidenote: the eight-pointed star was also certainly in use for heraldry purposes before '1793', as we see in this janissary emblem:

(— Source of both pictures simply states: 'a many-pointed star was changed to five points'…)

More on the actual Ottoman practice of flag usage: The 1851 edition of Orbis Pictorum explains that individual ships would fly a crescent/star-flag, but once they group into a squadron or larger fleet, only the flag-ship would sport it, while the others revert to a simple red banner.

An 1861 Art-Journal depicts and describes the Turkish flag as:

TURKEY. A red flag, with a silver crescent and star of eight points (118). The Turkish Standard is red, and has three golden crescents upon a green oval. The flags of Turkish merchants and Ottoman Greeks are severally red, with a broad green horizontal stripe, and red,with a similar stripe of blue.
— The Art Journal: The Illustrated Catalogue of the Industry of All Nations, Volume 10, Virtue, 1861. (p51, gBooks).

In 1872, one general lexicon describes the national coat-of-arms as having a six-pointed star, on green, but the national flag as red and missing any star:

The imperial private coat of arms (Tengbra) is a sign composed of several features. In the case of the current sultan, it consists of his and his father's names and the suffix "invincible emperor", and has a flower of six leaves as an epithet.

The national emblem is a green shield with a silver crescent. It is surrounded by a lion skin and covered by a turban with a heron feather, behind which two standards with horse tails appear. To the left of the turban is a golden hexagonal star, to the right a waxing moon.

The 1878 edition of Siebmacher's flag book depicts the following flags in use at the time:

The Met Museum dates this cigarette card to 1887:

The Ottoman Imperial Archives even dates the following combination to 1893:

Flags of the Khedivate of Egypt, 1893

Another find with still eight rays to the star from 1896: 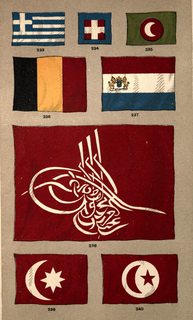 238 Turkey, Standard. 239 Turkey, Government. 240 Tunis, Government.
— F. Edward Hulme: "The Flags Of The World: Their History, Blazonry, And Associations. From The Banner Of The Crusader To The Burgee Of The Yachtsman; Flags National, Colonial, Personal; The Ensigns Of Mighty Empires; The Symbols Of Lost Causes", Frederick Warne & Co.: London, New York, 1896. Plate 21.

To be dated between November 1914 content-wise, and 1915 (according to the date stamp of one original on auction), we still see the eight-pointed version in this propaganda postcard created by Paul Otto Engelhard: 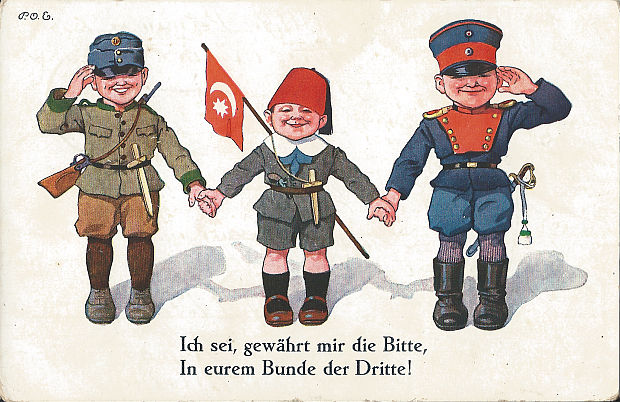 The same artist, repeating the exact same job in 1917: 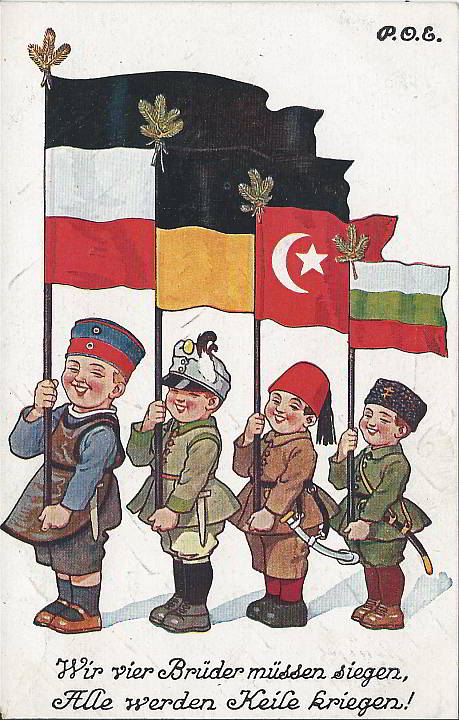 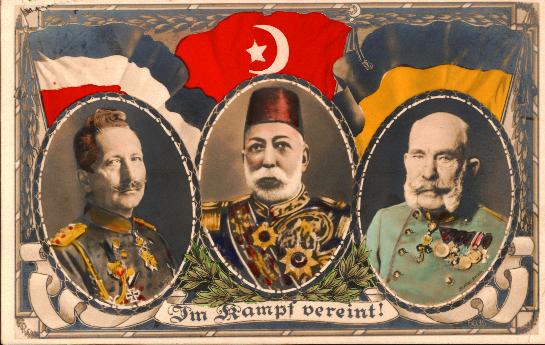 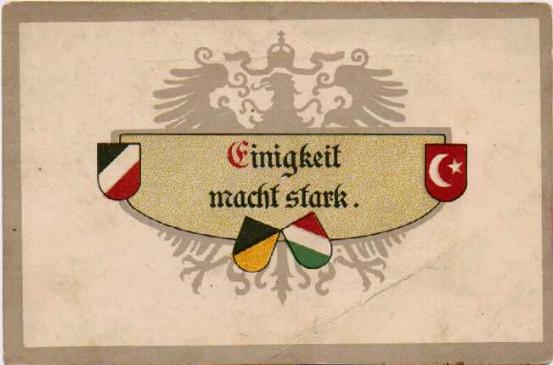 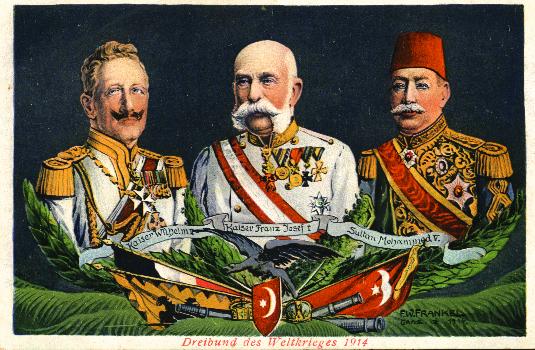 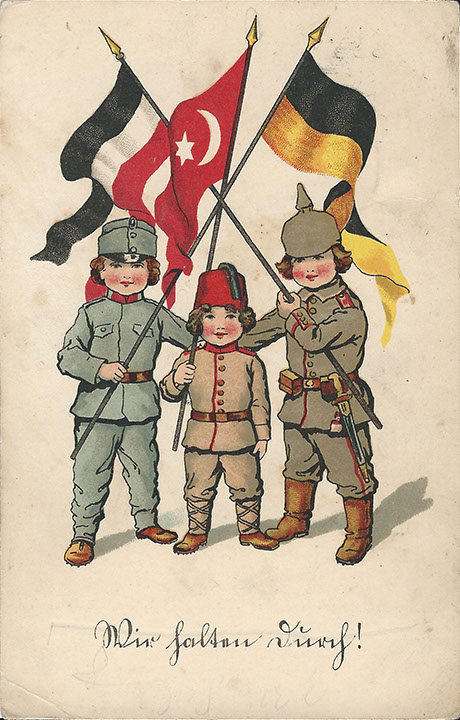 The coat of arms however is depicted on English Wikipeia with eight-point star for 1846, which was then reduced to six points in 1870! According to that source a finalised version was adopted only in 1882 with a five-pointed star.
And yet, even that coat of arms also has an earlier version from 1856 with a five-pointed star, in that case representing the Rumeli part of the empire: 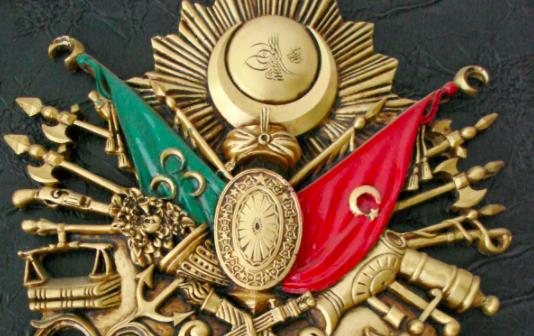 In the Ottoman state, until the 2nd mahmut period, the state had 2 flags, the green one with the crescent and the star representing the Greek lands, namely the Rumeli Beylerbeyli, and the crescent and star al flag representing the Anatolian and other Asian states. In 1826, the governorship of Rumeli was abolished and the states of Thessaloniki, Yanya, Manastirs and Edirne were created instead, and instead of the green and crescent-and-star flag, the crescent-star and crescent-star flag began to be used as the only official flag of the state. (src)

The English Wikipedia page for 'star and crescent' is in direct conflict with the one quoted in question:

With the Tanzimat reforms in the 19th century, flags were redesigned in the style of the European armies of the day. The flag of the Ottoman Navy was made red, as red was to be the flag of secular institutions and green of religious ones. As the reforms abolished all the various flags (standards) of the Ottoman pashaliks, beyliks and emirates, a single new Ottoman national flag was designed to replace them. The result was the red flag with the white crescent moon and star, which is the precursor to the modern flag of Turkey. A plain red flag was introduced as the civil ensign for all Ottoman subjects. The white crescent with an eight-pointed star on a red field is depicted as the flag of a "Turkish Man of War" in Colton's Delineation of Flags of All Nations (1862). Steenbergen's Vlaggen van alle Natiën of the same year shows a six-pointed star. A plate in Webster's Unabridged of 1882 shows the flag with an eight-pointed star labelled "Turkey, Man of war". The five-pointed star seems to have been present alongside these variants from at least 1857.

Looking through photographs shows indeed mostly a five-pointed version towards 1900, but the lack of strict standardisation for shapes and dimensions and configurations is still evident in eg 1911 when in many pictures the flags used are indeed uniform, but in not so few also a quite mixed up showing in one and the same frame:

Of course, the modern interpretation for the reason of having five points is that they should represent the five pillars of Islam. That this would have been 'the reason' for standardising on it seems dubious. (Cf Marshall, p203e)

It seems quite evident from all the contemporary sources given that a firm date like "1844: changed to five pointed star", given in the two modern books referenced or on English Wikipedia seems to clash with observed reality. It is therefore rather doubtful to glean much information from asking the why behind any change taking place then, when it simply did not.

6
Identifying a military uniform from the early 19th century
11
Why did nationalism in all of Europe surge in the 19th century?
6
Codification of Sharia by the Ottoman Empire in the 19th century
14
What is the flag in this 17th century painting?
9
Did the 49 star USA flag see significant adoption by the American public?
6
How was 19th century ship tonnage reported?
6
Why was the C-pennant chosen as the flag of ships from Allied-occupied Germany?
4
In the 19th century, do we know how armor changed with respect to guns of the time?