Did Aztecs know how many continents there are on earth?

I was leafing through an old French magazine, Historia, and read something that caught my attention. The author of a small article on Aztecs games mentionned a god, Xochipilli Macuilxochitl, who was crowned with five flowers. According to the article, the five flowers were symbols for the five continents of Earth.

It seemed absurd to me but I haven't the knowledge to prove it and be sure of the absurdity. If someone had any information about this crown, the geographical and traditional knowledge or beliefs that could make sense, I would be very happy to know about it.

I was hoping that someone with better resources on Aztec mythology would speak up, but in absence of that, I'll tell you what I found looking into this online. Chief among it was that I could find nothing whatsoever backing up that interpretation of the five flowers, and lots saying it meant completely different things. Given that, my suspicion is that this is a misinterpretation of the source material on someone's part. If not yours, then the article authors' (or perhaps their source's).

The Aztecs did have a belief that there had been 5 Suns (taken literally, or "worlds" less literally), but they didn't think all existed simultaneously. Rather that the world had ended 4 times previously, and it was their sacred duty to prevent it happening a 5th time. There is no indication I can find that they believed there were currently other worlds out there.

Azetcs were also not a particularly maritime people. In fact their empire had noticeably little coastline, considering where it was, and their capital was about as far inland as you can get in Mesoamerica. Most of the archeologists specializing in their larger Nahua culture will tell you it likely originated in the Southwest American deserts to the north. 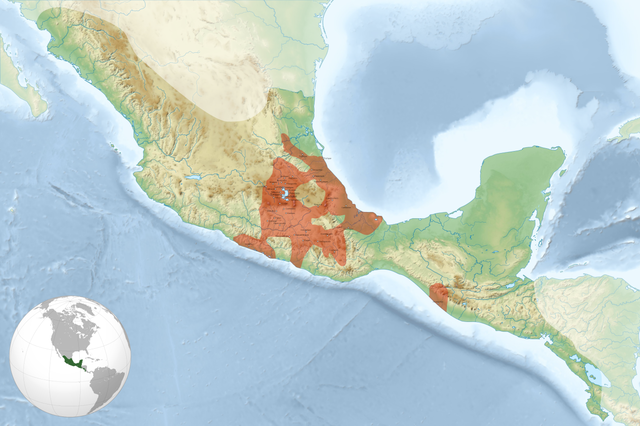 So I'm not finding much support for the idea that they had any concept of whole other continents existing beyond their eastern and/or western sea, and given their cultural roots and outlook, it seems highly unlikely.

Do you know how many continents there are on Earth? (I don't!) Is Europe a separate continent from Asia? Is Australia the biggest island or the smallest continent? Is Antarctica an ice-locked archipelago or a continent? Are the Americas one continent or two? (All of those questions can be answered reasonably either way.)

The separation of Europe from Asia into two continents happened because, from the point of view of the Greek Mediterranean world, all of Asia that mattered was across the sea from all of Europe that mattered. They knew that Europe and Asia were connected north of the Black Sea (though they didn't know how big a connection) but they didn't care, because for their purposes, they were separate continents.

The idea of a continent is more a cultural thing than anything else.

(From a proper scientific point of view continents are probably better defined by tectonic plates so now you're dealing with twenty or so. Maybe a continent is a tectonic plate with dry land attached? That still leaves quite a few. (And how much dry land is needed? And is Los Angeles on a separate continent from New York?)

If the Aztecs knew the geography of the whole Earth it would still be very surprising if they had counted continents the same way the Ancient Greeks have led us to do.

And there's no evidence they knew the geography of the whole Earth and considerable evidence that they didn't.

22
Is there any documentation that indicates the Aztecs were as violent as they are made out?
17
How common are major cities not built by abundant water?
27
How many different countries could a person alive today have lived in without leaving their hometown?
9
Did native Mexicans prefer Spanish rulers to the Aztecs?
7
Was there contact between the Inca, Maya and Aztecs?
9
Did ancient or medieval people know about underground rivers/lakes?
24
Did pre-Columbian Americans know the spherical shape of the Earth?
2
When did the spherical shape of the Earth become common knowledge?
2
Has there been significant progress in our knowledge of the Aztecs and/or Maya since the '60s?