Why would silk underwear disqualify you from the United States military draft?

I recently encountered a post by Kerry Callan where he provided a pictorial image from the September 1966 issue of Esquire magazine of conditions that will exempt you from the draft. 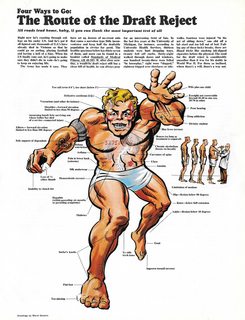 Most of them make perfect sense to me, except "silk underwear". I took a quick look through the text of AR 40-501 - Standards of Medical Fitness, but couldn't find anything. Is this just meant as a joke about how rich people sometimes got out of the draft with flimsy reasons or is there something else I'm missing?

In order to understand this question, you can't apply todays morals standards to the 1960s military establishment. An article from another website discussing 11 ways people dodged the draft had this entry (emphasis mine):

The artist in the magazine article you show just didn't define the underwear well, making them look a little too much like men's normal underwear. The practice is noted in the Wikipedia article on the History of cross-dressing:

Conversely, men would dress as women to avoid being drafted, the mythological precedent for this being Achilles hiding at the court of Lycomedes dressed as a girl to avoid participation in the Trojan War.

(An unsourced entry, but I liked the historical connection...)

If you are still unsure concerning the reference indicating that a method of avoiding the draft was dressing like a woman, a little more context might be in order. Here is a link to the same September 1, 1966 issue of Esquire from which the OPs artwork was taken. The magazine cover shows a young man applying lipstick with the headline reading:

How our red-blooded campus heroes are beating the draft.

It's a not-so-veiled reference to gender non-conformity and paraphilia which was grounds for disqualification until very recently.

I took a quick look through the text of AR 40-501 - Standards of Medical Fitness, but couldn't find anything.

I can't find a contemporary version, but as late as 2008 AR 40-501 Standards of Medical Fitness considered gender non-conformity and paraphilia (sexual interests in objects, situations, or individuals that are atypical) to be a personality disorder worthy of discharge. 1966 would have also included homosexuality.

n. Current or history of psychosexual conditions (302), including, but not limited to transsexualism, exhibitionism, transvestism, voyeurism, and other paraphilias, are disqualifying.

a. A history of, or current manifestations of, personality disorders, disorders of impulse control not else where classified, transvestism, voyeurism, other paraphilias, or factitious disorders, psychosexual conditions, transsexual, gender identity disorder to include major abnormalities or defects of the genitalia such as change of sex or a current attempt to change sex, hermaphroditism, pseudohermaphroditism, or pure gonadal dysgenesis or dysfunctional residuals from surgical correction of these conditions render an individual administratively unfit.

"Silk underwear" is likely a catch-all veiled slur for those behaviors; "wearing women's underwear". That poster is propaganda designed to shame people they consider to be draft dodgers, we can't expect 100% accuracy. When, in reality, the US military's own hang-ups opened the loophole.

This would be highlighted on film and TV by Corporal Klinger in M*A*S*H and his persistent attempts to get a discharge for being mentally unfit. 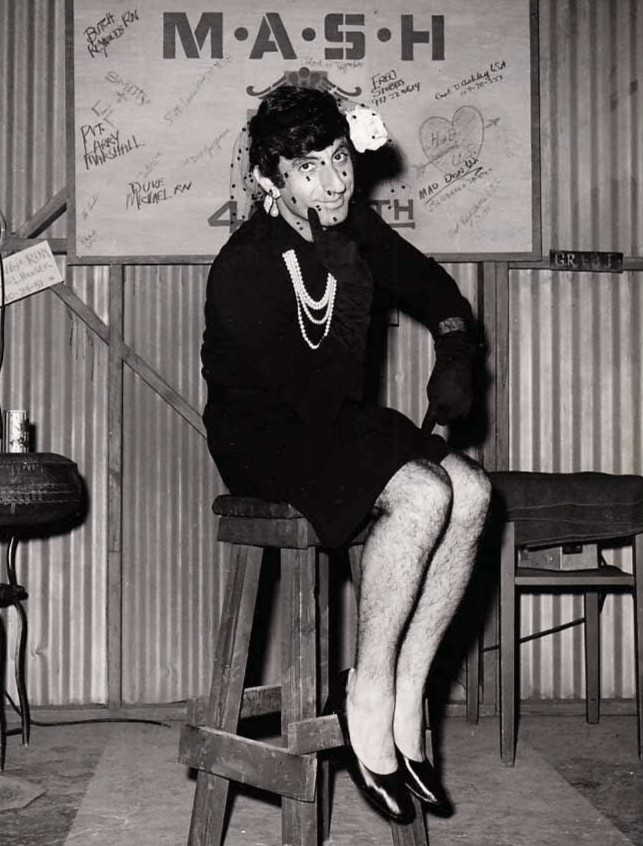 To add an example to the answers:

And when it came my time to serve
I knew, "Better dead than red"
But when I got to my old draft board,
Buddy, This is what I said

"Sarge, I'm only eighteen, I got a ruptured spleen
And I always carry a purse
I've got eyes like a bat and my feet are flat
My asthma's getting worse"

From the Draft Dodger Rag, 1965, by Phil Ochs, on his album I Ain't Marching Anymore

And "purse" is a bag that was used in those days by women to carry personal items. I guess nowadays there are male versions of handbags too.

They used to call it Section 8.

It covers a lot of psychological, emotional, sexual, etc grounds for dismissal from the U.S. army.

In the 1960s - when many young men wanting to avoid the Vietnam draft had no hope of using college draft deferrals, religious vocation, fatherhood, etc but had read Catch 22 - this was a popular way of making your sergeant throw you out of the army.

Here's the piece of script from the Sinatra movie, Suddenly, where we all learned about it:

You know, Baron, you got the yard look. You look yard bird to me.

I'm tellin' you, sheriff. Turn it off.

Big shot with the yard birds, eh? Come on now, tell me. Where were you court-martialled? What was it for? Rape? No, not rape. Killing, that's what you like, killing. Maybe shooting down unarmed PW's.

Sit down and shut up.

Ah, but by golly you got away with it. So... I got it. Section eight. You went out on a section eight. Section eight. Psycho in charge of killing, eh? You know, I knew guys like you. Killing was sweet. Rather kill a man than love a girl. A real kick. A thrill with the guts.

Jimi Hendrix used it. Maybe Jim Morrison too. I often wondered how the members of The Eagles dodged the draft.

It was also a way of ridding the army of psychopaths (guys who loved killing so much it had a demoralising effect on their fellow soldiers), guys who just wouldn't take orders (Sinatra and Kerouac got thrown out on this ground) and maybe guys whose battle shock in the Pacific War made them obviously unusable for further fighting.

The U.S. army in recent years replaced this provision with something more specific and cognizant of modern sociology and psychiatry.

Not the answer you're looking for? Browse other questions tagged military conscription or ask your own question.