Why did Italian immigration to the US decrease from 1900s to 1920s?

Excluding the start of WWI and the later Immigration Act of 1924, what is the reason for this decrease especially from the Italian side. See ncdemography.org

There are several factors which contribute to the decline of Italian Immigration in the specified time frame, but to understand them we need better information. The source indicated does not help because it is only looking at information in 10 year increments and reveals no numerical information. 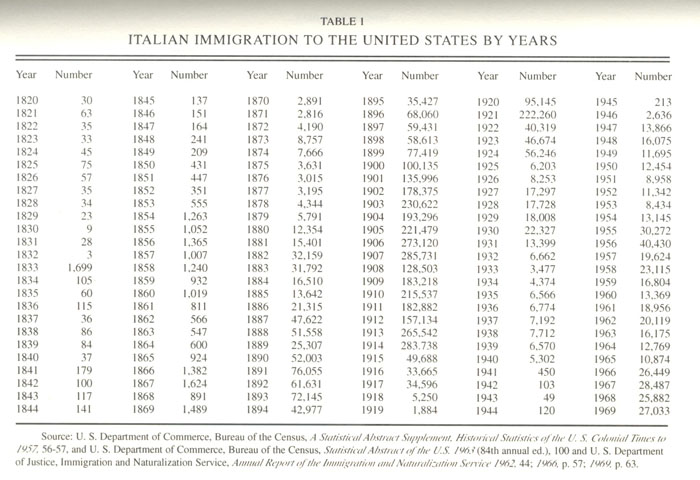 Context being of utmost importance when understanding history, once we break down the problem to a year by year study, we can get a better understanding of what transpired to cause the noted changes.

You can see that the immigration numbers were high from 1900 right up until the start of WW1 in 1914. The numbers indicate a precipitous drop from 283,738 in 1914 to 49,688 the following year. The numbers continue to drop right up until 1920. This indicates that 'excluding the start of ww1' is probably ignoring the primary cause of the decline in Italian emigration to the US. But not the only cause.

We can see, when we have the numbers laid out year by year, a second major drop in 1918, (from 34,596 to 5,250). History is all about context, so what happened in 1918? The so-called Spanish Flu pandemic, also known as the 1918 influenza pandemic. The combined effect on Italy of WW1 and the pandemic are noted in this abstract of an article on The Spanish influenza pandemic

This pandemic was a particularly dramatic event, because it occurred at the end of World War I, when both armies and the civilian population, in nations involved in the war, were exhausted. In Italy 600,000 people are estimated to have died of Spanish influenza. Together with the death of 650,000 soldiers during the war, this had a major demographic impact.

These two events combined to create a major drop in the pool of prospective immigrants.

Looking at the numbers in the above table a recovery began however, with higher numbers in 1920, peaking again in 1922 over 200,000, followed by another precipitous drop in 1922. So again we have to ask ourselves, What happened in 1922? The increase in 1920 and the following decline are mentioned in the wiki article on the Italian Diaspora (emphasis mine):

The extreme economic difficulties of post-war Italy and the severe internal tensions within the country, which led to the rise of fascism, led 614,000 immigrants away in 1920, half of them going to the United States. When the fascists came to power in 1922, there was a general slowdown in the flow of emigrants from Italy

The rise of fascism in Italy was then the contributing factor to the third major drop in numbers in 1922.

So the major events contributing to the decline of immigration of Italians to the United states were:

(Capped off with the Immigration Act of 1924 as mentioned in the question.)

Not the answer you're looking for? Browse other questions tagged united-states italy immigration or ask your own question.

31
Why did so many Italians emigrate to Argentina?
30
Was the Italian campaign a strategic mistake?
3
Why did the National Origins Act of 1924 use the 1890 census data?
7
Which Allied forces held the French-Italian border from Operation Dragoon to the end of WWII in Europe?
5
Why did Black and Asian immigrants from the Empire not come to Britain in substantial numbers until after WW2?
5
What percentage of US population descended from immigration per immigration year?