On the surface, it seems logical that the probability of survival, during times of war, would be higher in rural areas.

However, I cannot find any hard data from past wars to either confirm or deny this hypothesis.
Does such data exist?

My primary interest in this is developing an accurate predictive model for the future. Therefore, data on more recent wars might have somewhat better predictive power. Of course, this may not be entirely true, nevertheless, solid data from previous wars would be a helpful starting point.

I suspect the following modern considerations might be true as well, but there might not be much historical data. 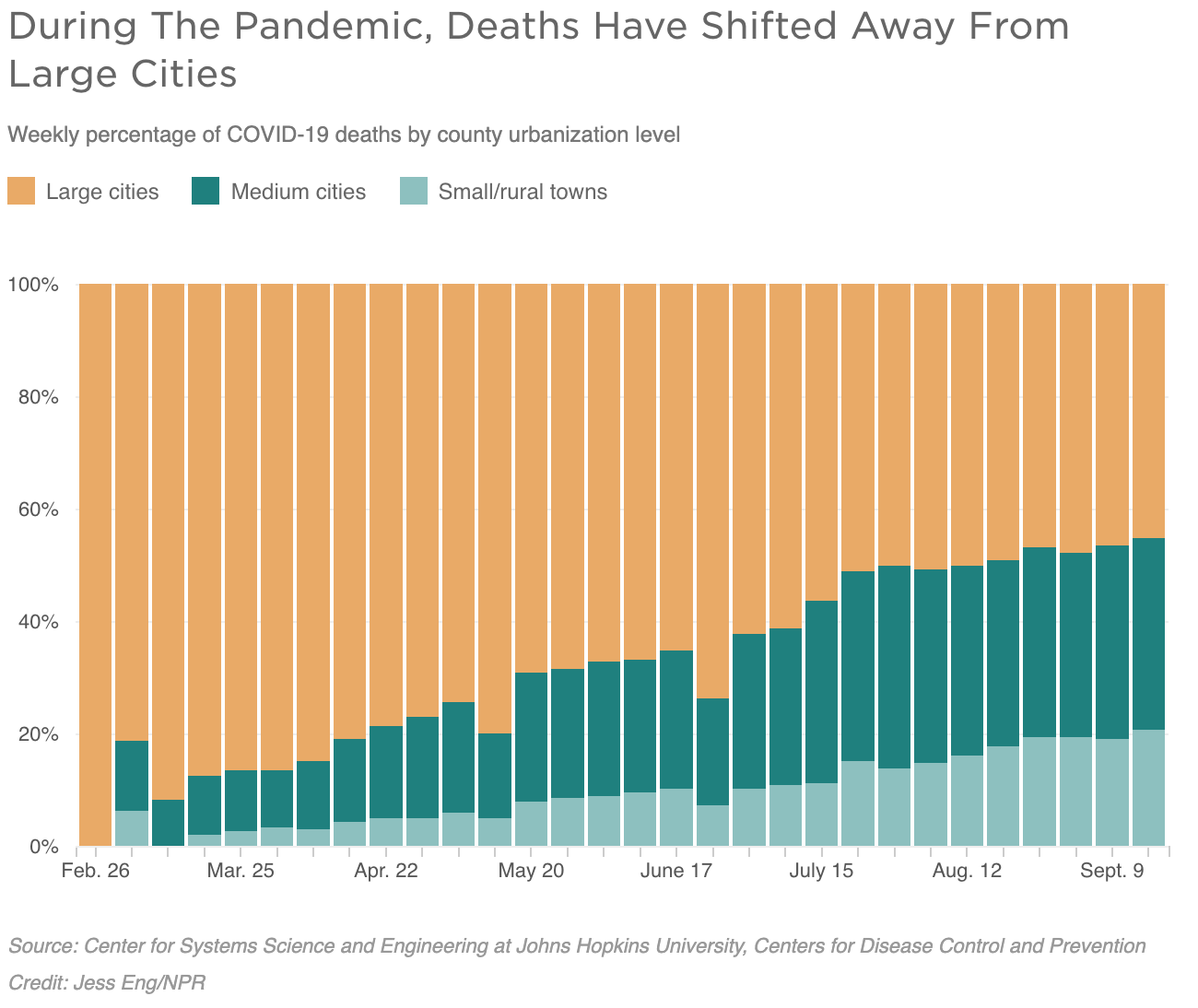 For my particular interests, only the coarse grained question of death counts by area is of interest. Think of it this way: World War III breaks out. If you want to survive, where should you reside?

For my particular interests, only deaths attributed to war by area is of interest. By "attributed to" I mean deaths that would not otherwise have occurred. I realize this is a grey area. If this data is broken down by violent vs non-violent, that would be an appreciated bonus. At this point, however, I would be happy with any data that could be offered to support or disprove this hypothesis.

It's logical you can't find hard data, because your premises are flawed.

Look at medieval cities. What do you notice? A city wall. That's what separated the sheep from the goats, in this case: cities from villages. Walled cities offered protection not only for their own citizens, but also for the surrounding countryside.

That distinction was pretty important back then, and even now. A city was defined by its walls. Not having a wall made it a large, or very large village.

Assuming the city fathers had a bit of forewarning and common sense, they had stocks of food available to withstand a siege. Not always, for example the citizens of Haarlem suffered starvation because their city fathers didn't think a siege was going to happen. In many countries, the city was the official refuge for country folk of the surrounding area.

That's taking care of the food and safety issue. Towns were safer than villages. A lot safer. Let's have a look at that now:

Villages were prime targets for roving military and other bands. There was some wealth, not a lot, and probably some food to be found there. As well women to be raped. Few villages had a wall or even a stockade. As well as far fewer citizens available for defense.

In defense, numbers do add up. A city is not only safer because it has a wall. Per m2, it has far more people than a comparable village. Even if a village is protected by a stockade, rarely there enough defenders available to properly man it.

Most armies in that period lived off the land. Which was: the countryside. They took what was available, and then some more (very often). Both military bands or units and opportunistic bandits. They had little chance to lay successfully siege to a town, but pillaging a village was their bread and butter. Very often, literally.

After you completely changed your question, you added:

My primary interest in this is developing an accurate predictive model for the future.

That is impossible. Medieval warfare cannot be compared with modern warfare. Even if you would try that, the basics remain the same: modern cities are notoriously difficult to attack and easy to defend. Look at Stalingrad, Cherbourg, Warsaw and many other cities. The countryside wasn't much better of, in many cases villages were burned to the ground. That happened a lot during WW2, as well as during following conflicts.

Your next points about NBC weapons I won't address because they are completely outside the topic. Actually, because of that, I have to regretfully downvote your question.

With regard to your question, your best bet is to dig in what is happening in Syria right now. It meets all your requirements.

So what is a final conclusion ? If you are interested in statistical analyses best advice would be to seek percent of rural and urban population in a given country during certain period. Since survivors survive :) if you have large population of villagers that means your villages are relatively safe. If, like in the case of Hungary, you suddenly find yourself practically without peasants, that means that your villages are highly vulnerable.

Such estimates are a bit difficult because in the past, population data was often gathered for tax purposes, so there were incentives for not beimg counted and it also made sense to just ignore those who were too poor to pay anything anyway (argued e.g. here* for the Thirty Years War). I believe it is also quite difficult to account for migration/displacement, which tended and tends to happen a lot during wars.

*That article also nicely supports rs.29's point re. out-of-the way villages. The Oderbruch area at that time was a giant swamp area and the historian cited in the article says that population losses there were a lot less than in some nearby areas.

Military Armies don't target "Urban Areas Only". Rural Places are just as Targeted as Urban places. Covid-19 is a virus, not a Military General. Capturing a Capitol is necessary for collapsing a country, but it is illogical that it would itself collapse the entire country.

During World War ll, the Germans went everywhere just to Exterminating jews. Jews are not safe in the rural German Villages. Armies need to find a way to get to their "Urban Target" by entering through rural towns in bad weather, Sicily for example was not Urban

Covid-19 is a health issue, it does not determine which town an Army will invade.

Not the answer you're looking for? Browse other questions tagged world-war-two war statistics or ask your own question.

25
How frequently did monasteries attack other monasteries in Early Medieval Western Europe?
14
Is this Hitler's account of seemingly counterproductive British radio war propaganda true?
49
Has there ever been an instance of an active nuclear power plant within or near a war zone?
16
Why did the Japanese attack the Aleutians at the same time as Midway?