What were paper airplanes called before there were real airplanes? (i.e. untethered winged flyers, not kites or balloons)

According to the Google Ngram Viewer (https://en.wikipedia.org/wiki/Google_Ngram_Viewer) the English word "airplane" was practically unused before the year 1900. Given that paper is credited with having been invented over two centuries before what we know as the airplane; any paper-based flyers throughout the ages would have had to be called something other than "paper airplanes".

Is there documented evidence of the use of alternative names, in any language, and what were they?

Note: By paper airplane I'm referring to any invention mostly or exclusively made of flat paper (parchment, etc.) that when thrown stays aloft for longer than the same paper compressed into a ball would.

They were called paper darts in the 19th century, as evidenced in this article, which contains many detailed references going back as far as 1864, and many illustrations

In fact, it appears that they continued to be called "paper darts" until the mid-20th century, when the terminology switched largely because airplanes had come to more closely resemble them. Early airplanes looked nothing like paper darts.

I should add that the terminological tide may have turned definitively when The Great International Paper Airplane Book appeared in 1967. It contained complex and fancy paper airplane designs (including a paper helicopter), and the authors used "paper dart" as a term of opprobrium for the familiar, boring design that every child learns. 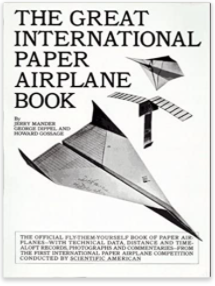 These terms were used from at least the 1860s. However, not all of these designs were what we would today recognize and call 'paper planes'. Some clearly looked like the darts thrown at dart boards.

There are 19th century references (with images resembling paper planes) to

David Mitchell, a paperfolding designer, seems to have researched this in some detail on his webpage The Paper Dart / The Arrow.

The image below, from a book published in 1864 but with foreword dated May 1863, is from Hermann Wagner's 'Spielbuch fur Knaben'. In German, it was called simply "Ein Warfpfeil" [sic] (a dart).

The earliest instructions Mitchell found for making what we now know as a paper plane were in the 1864 edition of Every Little Boy's Book under the heading 'PAPER DART' and with a very small picture.

'Arrow' was also used in the New York publication 'The Kindergarten Guide' from circa. 1882 with the following diagram:

It's important to note that not every 19th century reference to a 'paper dart' or 'arrow' refers to something resembling a paper plane. This is clear from the evidence presented on Paper Darts and Flights where there are several illustrations which are clearly darts (sometimes including a pin in the tip), not planes. See, for example, this one:

Image taken from The Popular Recreator, 1873

Also, the circa. 1786 reference to a paper dart (cited in this reddit post) by the English actor Charles Mathews is inconclusive as to exactly what the then circa. 10-year-old actor-to-be was actually throwing:

This was about the year 1786. Bishop, the head master, wore a huge powdered wig, larger than any other bishop's wig. It invited invasion, and we shot paper darts with such singular dexterity into the protruding bush behind, that it looked like "a fretful porcupine."

Source: Mrs. Mathews, 'The Life and Correspondence of Charles Mathews' (1860)

It is commonly stated that paper planes originated in China over 2000 years ago as a development of paper kites. I can find no evidence whatsoever to back up this assertion. It probably arises due to a confusion between paper planes and paper kites.

"Paper darts" were the best way to have fun in the 1860s. As early as 1864, kids were flying "paper darts" that looked like what we call "paper airplanes" today.They were called paper darts because they looked and acted like "darts" to a degree of thinking. 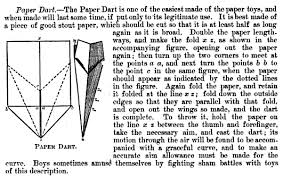 Not the answer you're looking for? Browse other questions tagged ancient-history aircraft inventions english-language entertainment or ask your own question.