How secure was Germany's last foothold in the Caucasus in 1943?

In January, 1943, after the collapse of Fall Blau and just before the fall of Stalingrad, Germany withdrew most of Army Group A from the Caucasus. But they left a rearguard consisting of the Seventeenth Army, some 400,000 men at the Kuban bridgehead at the Taman peninsula on the eastern shore of the Black Sea. The Russians captured the main supply route through Rostov, so this bridgehead was supplied through a secondary route around the Black Sea and the Sea of Azov, and specifically along the land bridge across the Kerch Strait next to the Crimean peninsula.

How secure was this southern supply route up to the fall of 1943 when it was abandoned? Did 400,000 men represent the maximum that could be supplied this way or could the Germans have renewed their southern attack in the Caucasus in the summer of 1943 by sending reinforcements there instead of to Kursk?

Clarification: After the defeat at Stalingrad, the Wehrmacht was basically "secure" nowhere in the Soviet Union. So the question really means, was how much less secure in the far south than elsewhere?

Not a Realistic Prospect for Supporting a Major Operation

The logistics into the Kuban bridgehead were extremely fraught, and not at all reliable as a basis for using the bridgehead as a springboard for a renewed German major offensive into the Caucasus in 1943, or later. 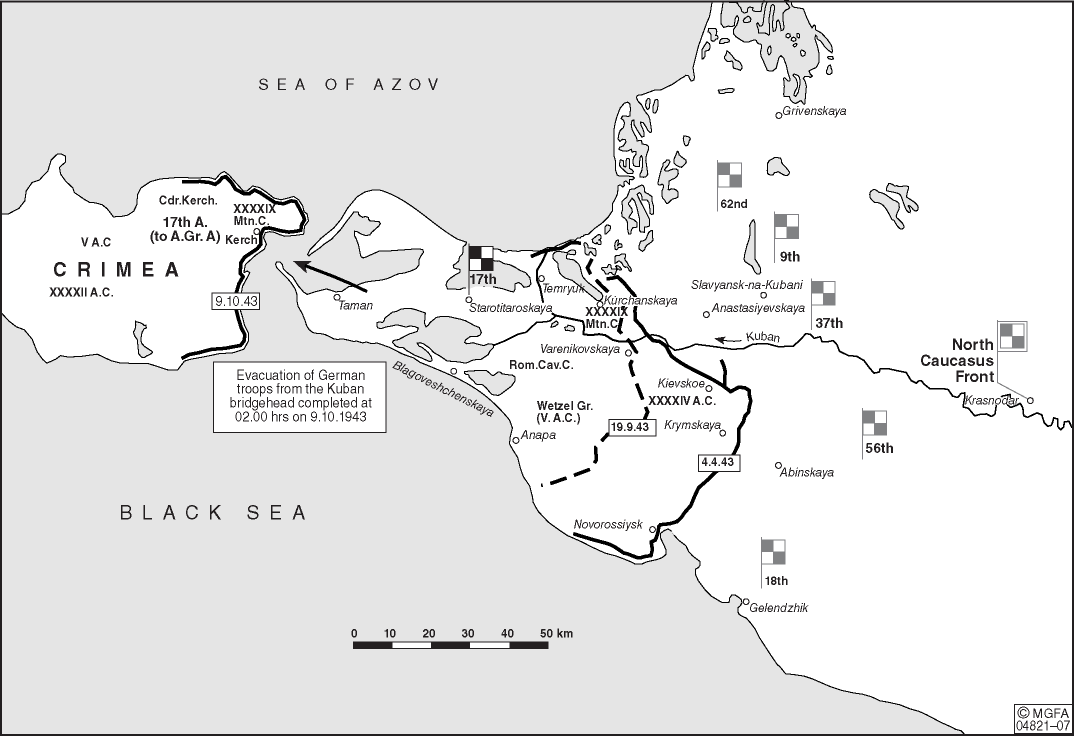 The cable car across the Kerch Strait, which the Germans brought into service in May 1943, had a capacity of 1000t per day, which Albert Speer claimed was the bare minimum required for the defensive needs of the 17th Army.

The maritime route from Romania delivered around 74,000t of civilian and military supplies into Crimean ports in the month of October 1942, but only 7,000t were delivered by sea directly into Taman. The danger of interception led the German Naval Staff to prohibit the operation of merchant shipping in the eastern Black Sea, and consequently sea movements in this area, and the Sea of Azov, were limited to small vessels and barely sea-worthy barges or landing-craft. Much of the sea freight moving from Romania and the western Black Sea in support of the 1942 Caucasus Offensive, was in fact trans-shipped through Ukrainian ports through the congested rail network at Rostov, and even when the logistical system was breaking down and the Caucasus offensive was grinding to a halt for lack of fuel in December, only 5,000t was delivered into Taman by sea during that entire month, despite Hitler's orders to "achieve maximum efficiency" in Black Sea traffic. Many of the barges and small boats were lying idle, due to poor weather and fears of interception.

Hitler maintained his desire to resume offensive operations from the Kuban bridgehead, and indeed ordered the construction of a road and rail bridge across the Kerch Strait, which began in April 1943, to support this operation. However, the bridge was unable to be completed before the Kuban bridgehead was abandoned, and the bridge was destroyed in September 1943, along with the Cable Car, by retreating German forces. It is worth noting, that the bridge construction was resumed by Soviet forces using the German materials, after they had secured the area, but construction was hampered by poor weather, and the bridge was eventually destroyed by drift ice from the Sea of Azov in February 1945, before it could be completed. So as a solution to the logistical problem of supporting German offensive operations from the Taman Peninsula in 1944, it must be seen as an "unproven" asset.

Thus it can be seen, that the prospects for supporting a renewed German Caucasus offensive in the summer of 1943 from the Kuban bridgehead must be regarded as negligible, and although Hitler had plans to prepare a more secure foundation for his ambitions for 1944, these must be regarded skeptically as realistic solutions to the significant logistical problems which lead to disaster in the 1942-43 effort.

Good defensive position but nothing much else

Although Germans painted Kuban bridgehead as a bridgehead, i.e. the place from which they could start a new offensive into Caucasus, reality on the ground was somewhat different.

First of all, geographically speaking area is divided into three parts by Caucasus mountains themselves. You have northern part which is relatively flat, mountains themselves and coastal region in the South. Northern plains were in 1942 object of German advance with their motorized forces. However, as Soviets gradually outnumbered German armored formations, this area had to be reduced to relatively narrow front that could be defended with fortifications, anti-tank guns, system of trenches etc... Mountainous area was never good for offensive operations, as Germans witnessed in 1942. However, now it gave them solid foothold for defensive operations. Finally, on the coast Germans never advanced much further from Novorossiysk even in 1942. Now they wanted to hold this port, to deny it to Black Sea Fleet, but any offensive operations were pretty much unrealistic, as Germans did not posses naval superiority or troops and means for large scale landing operations. In reality, main strategic benefit for the Germans was purely defensive one - to protect Crimean peninsula further to the west.

To further proof this point, it should be noted that only panzer division in Kuban bridgehead was 13th Panzer Division, and even they were withdrawn and reassigned in May of 1943. Rest of the troops in German 17th Army were either regular infantry or mountain (Jäger) divisions. Supply of these units was done from Crimea across Kerch strait. Kerch strait is only 4-5km wide at narrowest point, and appears it was not that critical. Germans used all kinds of barges, ferries, local small craft and even built a railway bridge (not finished but useful as it had railway connection) and a cable car to cross this relatively small obstacle. Capacity of the cable car was estimated as 1000 tones daily. Overall, Axis in general had abundance of suitable vessels for transport, as even Croats (smallest Axis contingent) had at their disposals dozens of vessels which could make several ferry runs daily (and nightly) across the strait. Soviet naval forces could not intervene while Luftwaffe had aerial superiority over the Crimea and overall that part of the Black Sea. Therefore, major part of the fighting over Kuban were aerial battles, and precisely in this sector of the front VVS for the first time managed to wrestle control of the skies on their own, i.e. without ground forces advancing and chasing of Luftwaffe units.

As for fighting in Kuban bridgehead, it could be described as bloody but without much gains, especially if we consider early fighting in the spring of 1943. Soviet landings which were mostly unsuccessful except one at Malaya Zemlya, then subsequent Germans attempts to dislodge them in Operation Neptune etc ..Soviet attacks continued during the summer but without much success. However, situation in other parts of the front became critical for the Germans after their Kursk offensive (Zitadelle ) failed to meet its objectives and subsequent Soviet advances all across the front.

In any case, Germans decided to withdraw from Taman peninsula already in early September of 1943. Soviet operation to liberate Novorossiysk which lasted from 10-16 September 1943 only sped up German preparations for withdrawal from Taman peninsula (Operation Kriemhild) .Kriemhild was done relatively successfully as German troops hopped from one defensive position to another until vast majority of them crossed over to Crimea. However, as mentioned before, relatively narrow Kerch strait now proved a hinderance. In November 1943, land connection of Crimea in the north was cut off and at the same time Soviets launched Kerch–Eltigen operation on the eastern side of the peninsula. While costly, this operation forced Germans to divert part of their forces to the east, thus dividing them to two fronts which ultimately doomed their defense when final operation for liberation of Crimean peninsula started in April of 1944.

What would be a final assessment of German supply situation considering Kuban bridgehead ? At first glance, if the supplies were available in Crimea they could be brought to Taman peninsula with relative ease. In most of the 1943 Crimea had land connection with rest of German forces, as well as supply directly form Romania cross Black Sea. Theoretically, if they supplied 400 000 men in infantry divisions, they could have supplied similar number of troops in panzer divisions. Usually panzer divisions need more supplies (especially fuel) do to the armor and other mechanization, however, there is no proof that transport system over Kerch strait was a bottleneck, not even during the retreat in October of 1943. In reality, neither the Germans had the strength to launch another invasion of Caucasus, nor was Kuban bridgehead good place too start such invasion do to geography as explained above. Germans planned for 1943 to be a defensive year, with one large offensive around Kursk, not to gain some strategic objective (Kursk was not that important) but to lure and destroy Soviet armored reserves, thus preventing their offensive usage. In any case, when that failed and Soviets started rolling westwards, whole Crimean position became untenable. Kuban bridgehead was just a part of the problem, because with severed land connections now everything depended on transport across the Black Sea under increased Soviet aerial and naval activity.

12
How severe was the 1943 Bengal Famine?
6
Did the Germans attempt the easier or harder of two possible objectives in the Caucasus?
0
How did Red Army achieve to manipulate German Army in 1942 and 1943?
7
Did the Germans consider an amphibious landing for Fall Blau?
4
Was the 1939 Red Army more disciplined / better behaved than the 1943-1945 Red Army?
11
Why did Fall Blau start at Voronezh instead of further south?
8
What alternate north-south supply routes did the Soviet Union have when the Volga and Stalingrad were under attack?
4
Did the Germans try to "Pearl Harbor" Russia's Black Sea fleet?
1
How and why did the progress of Army Group A differ from what the terrain in the Caucasus might suggest?
4
How did Germany survive on the Eastern Front of WW2 for so long?