Are there any books on the recruitment of scientists from the Third Reich (Operation "Paperclip" and others)? [closed]

Ask Question
Asked 8 months ago
Active 8 months ago
Viewed 101 times
-1
Closed. This question is off-topic. It is not currently accepting answers.

Please advise the literature on the recruitment of scientists of the Third Reich after World War II ("Paperclip" and other operations).

Language: preferably Russian, but also English will do.

This topic is very interesting.

There is the book operation paperclip: The Secret Intelligence Program that Brought Nazi Scientists to America. by Annie Jacobsen.

In the chaos following WWII, many of Germany's remaining resources were divvied up among allied forces. Some of the greatest spoils were the Third Reich's scientific minds--the minds that made their programs in aerospace and rocketry the best in the world. The United States secretly decided that the value of these former Nazis' forbidden knowledge outweighed their crimes, and the government formed a covert organization called Operation Paperclip to allow them to work without the knowledge of the American public.

Drawing on exclusive interviews with dozens of Paperclip family members, with access to German archival documents (including, notably, papers available only to direct descendants of the former Third Reich's ranking members), files obtained through the Freedom of Information Act, and lost dossiers she recently discovered at the National Archives, Annie Jacobsen will follow more than a dozen German scientists through their postwar lives and into one of the most complex, nefarious, and jealously guarded government secrets of the 20th century. 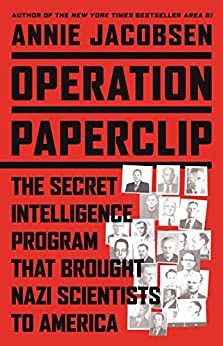 Not the answer you're looking for? Browse other questions tagged world-war-two science or ask your own question.

14
Did Erwin König Exist?
15
I'm reading The Rise and Fall of the Third Reich. What should I watch out for?
1
Where can I find a reliable archive of Hitler's speeches?
10
Which of the Nuremberg defendants spoke English, French, or Russian?
3
How did the Allies locate, identify and process Nazi War criminals?
11
What oath did medical students take in Nazi Germany between 1933 and 1945?
11
What transit restrictions were in place in Occupied Germany limiting military and civilian movement between the four occupation zones?
22
Why does the CIA report on the assassination of Reinhard Heydrich refer to it as "Operation Salmon" rather than "Operation Anthropoid"?
5
Did any Nazi court convict officers of atrocities that went "too far" even by SS standards?