Is the Cypress of Kashmar on display in Baghdad?

The Cypress of Kashmar was a sacred tree of the Zoroastrians. Apparently, according to the Shahnameh and other sources, it was planted by Zoroaster (or his patron) at the fire temple of Kashmar, and a millennium and a half later it was cut down amid much outcry by Ja'far al-Mutawakkil to be used in palace construction in 891. There is a Zoroastrian organization with some historical background. Now according what looks like a blog cited by Wikipedia, the palace still stands in Iraq. However, Wikipedia also tells us that the Abu Dulaf Mosque is built entirely of brick. If logs from the tree really were used there, it is strange to think that a lost sacred tree from the foundation of Zoroastrianism might have been damaged during the Iraq War in 2005, when a bomb exploded at the mosque.

If the wood is anywhere in public view, its story could be confirmed with remarkable certainty - just look for beams from a tree 1450 years old, of a known species, that is 28 whip-lash lengths in circumference.

But -- is there any beam in the mosque, or the much larger region of ruins tied up with Samarra, that can be attributed to that tree?

There seems to be some confusion over what is claimed, what we are looking at, and what we should be looking at. Lets see if we can clear some of it up.

Staring with the page the OP cites which claims the palace still stands in Iraq (emphasis mine):

the Abbasid Caliph Al-Mutawakkil ordered the tree be felled and transported to his capital in Samarra where its wood would be used as beams for his new palace. The palace and its spiral minaret still stand today.

This is wrong. The location shown in the picture is not a palace, but the Great Mosque of Samarra. It was built by Al-Mutawakkil. But its not his palace.

The second source of confusion is where the OP associates this 'palace' with a different mosque, the Abu Dulaf Mosque , which also has one of these fascinating spiral minarets. (This one is actually closer to the palace, but still not a palace.)

Where, then, is this palace? One of the OP's other sources gives a little more background to the story (emphasis mine):

When Mutawakkil the Abbasid was building the Jafarid palace [19] at Samarrahhe sent orders to Tahir ibn 'Abdullah, the governor of Khurasan, in writing, that he should cut down that tree, put the trunk upon a cart, load the branches upon camels, and send it to Baghdad. An assemblage of the Magians offered Tahir 50,000 dinars, but he would not accept, and he ordered the tree to be hewn down. At the time when the tree fell, the earth underwent such a quaking that great damage was done- to the aqueducts and the buildings in that vicinity.

They say the age of the tree was 1450 years, and that the circuit of its trunk was 28 whip-lash lengths, and under its shadow more than 2000 cattle and sheep took rest. Moreover, birds of various kinds, beyond limit and count, had built their nests in it, so that at the time of the tree's fall the face of the sun was veiled by the multitude of the birds, and the sky became dark. Its branches were loaded upon 1300 camels, and the cost of (transporting) the trunk to Baghdad was 500,000 dihrams. When the cypress arrived one station before the Jafarid palace, Mutawakkil the Abbasid was hacked to pieces that same night by his servants.'

So we can see the cypress wasn't meant for a mosque, but for the new 'Jafarid palace'. But where was this palace located? We can glean some more details from the Wikipedia article on Abbasid Samarra about this palace and the new capital city of Al-Mutawakkiliyya

Al-Mutawakkiliyya consisted of an unwalled area, through the center of which ran a north-south avenue. On the western side of the avenue was the Abu Dulaf Mosque. Like the Great Mosque of Samarra, the Abu Dulaf Mosque included a spiral minaret, measuring 34 m (112 ft) high.[66][67] The avenue ultimately led to the Ja'fari palace, which served as al-Mutawakkil's new residence. It was located in the north of al-Mutawakkiliyya and separated from the rest of the city by a wall 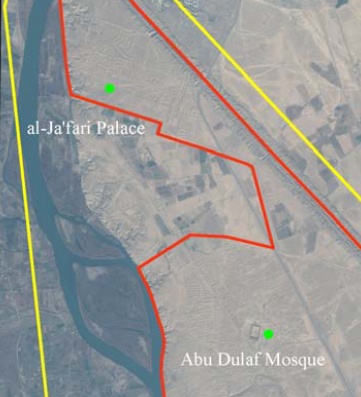 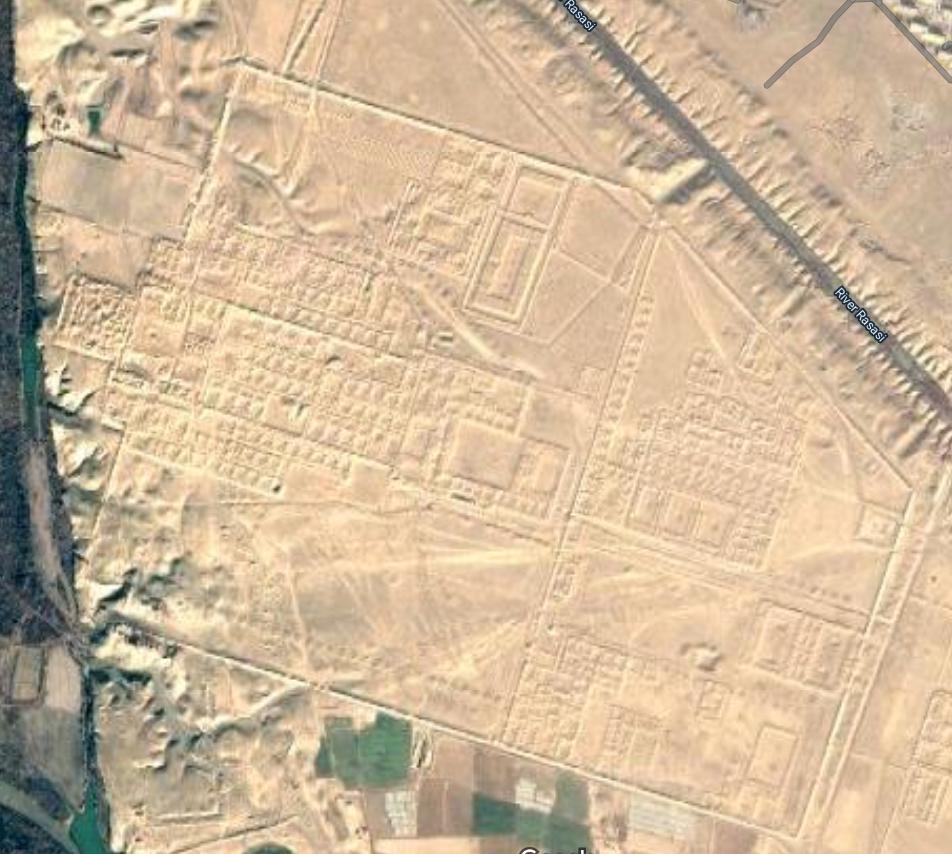 I see no surviving structures other than the imprint of foundations and walls that have passed to the ages.

I'm afraid that this Quest for the ancient magical tree will be fruitless...

Not only is there no original wood there, but much of the stone there is no longer original. Also, I can see no evidence that there was ever any wood there. If there was, it likely wasn't structural.

Here's an old black-and-white aerial photo of the site: 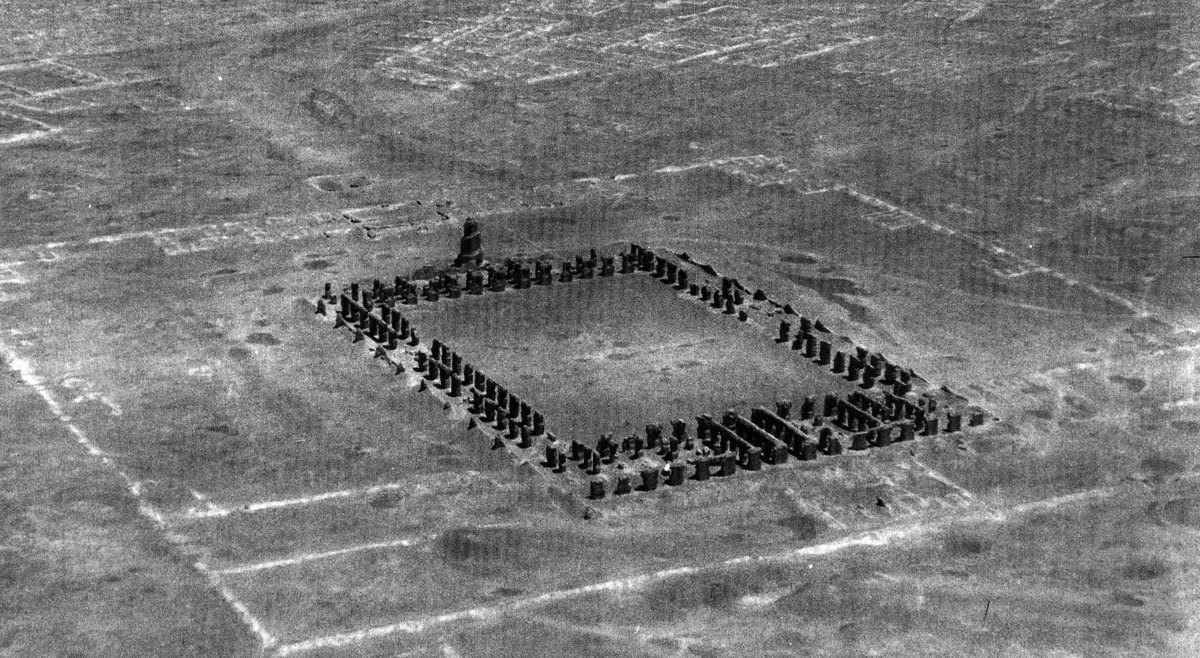 And another old color photo: 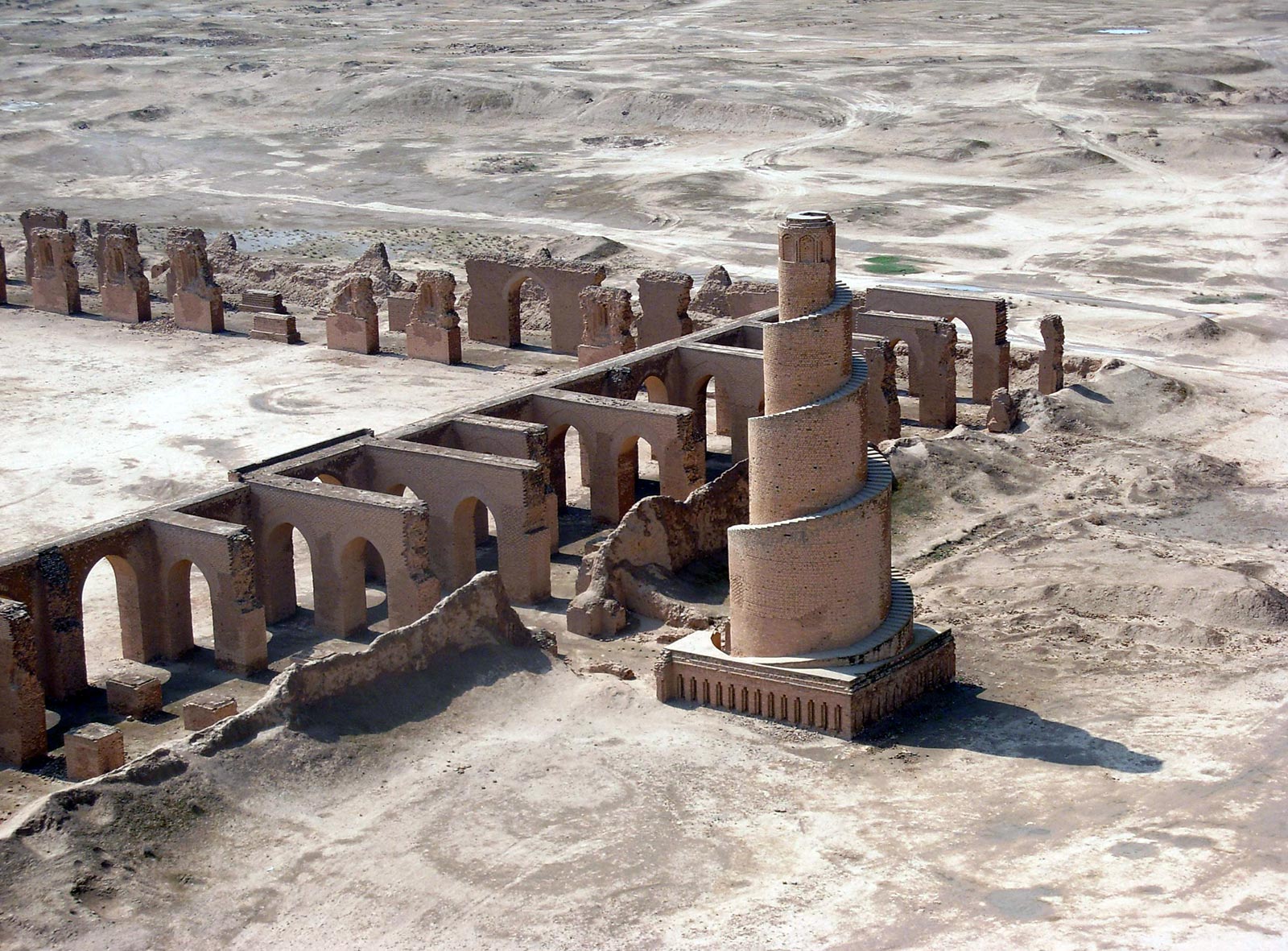 Both of these are from an article on the site from the Archways online Architectural magazine website. Sadly no photographers or dates provided.

It seems pretty clear from the pictures that at one point the site was mostly a ruin (minaret aside), and that its construction was entirely brick, with the kind of arching features you'd expect to see in stone or masonry construction for large buildings of this kind.

It appears that it may since have been reconstructed. In fact some reconstruction looks like it might have occurred between those two pictures. (There's also another aerial shot on that website that appears to show it fully reconstructed, but its so clean I suspect that's an artist's conception)

As for the current state of it and the effects of the 21st century political situations there on it, I'll quote from the UNESCO article on Samarra:

Since the war in Iraq commenced in 2003, this property has been occupied by multi-national forces that use it as a theatre for military operations.

The conditions of integrity and authenticity appear to have been met, to the extent evaluation is possible without a technical mission of assessment. After abandonment by the Caliphate, occupation continued in a few areas near the nucleus of the modern city but most of the remaining area was left untouched until the early 20th century. The archaeological site is partially preserved, with losses caused mainly by ploughing and cultivation, minor in comparison with other major sites. Restoration work has been in accordance with international standards.

The boundaries of the core and buffer zones appear to be both realistic and adequate. Prior to current hostilities, the State Party protected the site from intrusions, whether farming or urban, under the Archaeological Law. Protective procedures have been in abeyance since 2003 and the principal risk to the property arises from the inability of the responsible authorities to exercise control over the management and conservation of the site.

Not the answer you're looking for? Browse other questions tagged iraq caliphate zoroastrianism or ask your own question.

4
Why didn't America finish Saddam Hussein after the first Gulf War?
12
Was the Iraqi Mukhabarat modelled on the German Reichssicherheitshauptamt, and in what ways?
24
Why is no one claiming the title of Caliph?
2
What was the state of relations between Baathist Iraq and Taliban Afghanistan?
4
How powerful and influential was the "last caliph" Abdul Mejid?
5
Did Ali give his allegiance to the three first caliphs?
1
When were capital punishments suspended during the Rashidun caliphate?
3
What happened to Iraq's debts after the US toppled the government in 2003?
20
What are the primary sources for the Mongol sack of Baghdad?