Is the depiction of the Stirling Castle Knight historically accurate?

For some reason BBC depicted him with a shaved head. I was wondering if it is historically accurate for a 700 year old English nobleman to have a shaved head?

The reconstruction of the male figure, and historical investigation into the circumstances of his death, comes from a British documentary television series History Cold Case - Stirling Man. You can see a copy on YouTube here.

In this video you can see at 36:38 the section where they begin discussing the facial reconstruction process: 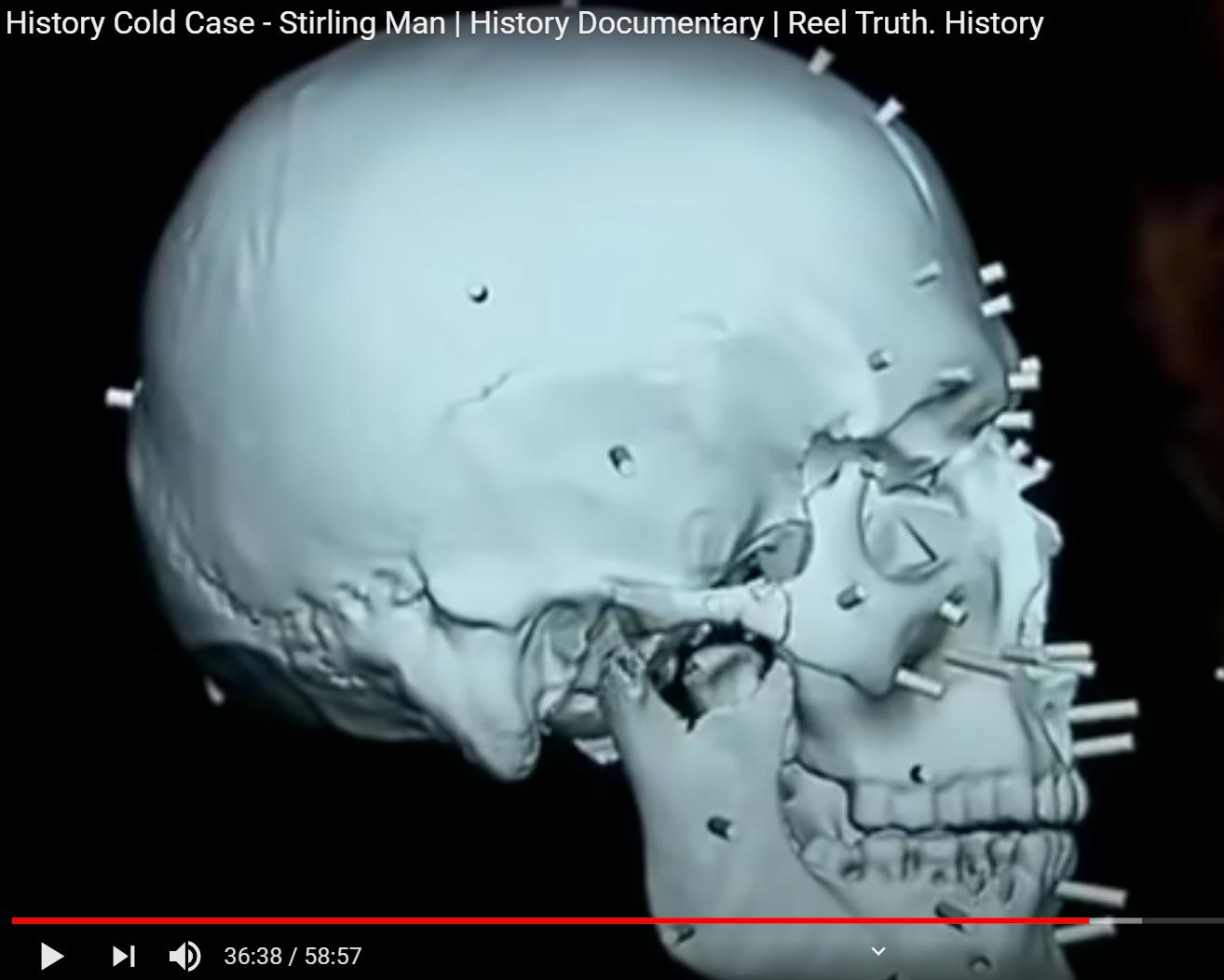 A later stage they have 'fleshed out' the model, and get a generic form which shows the shape of the head after the muscles and skin have been added in [38:19]: 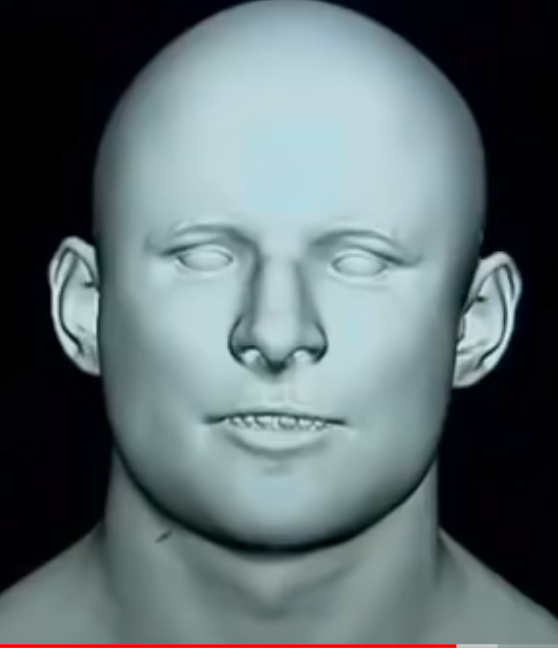 This is the physical structure that the science indicates.

The final presentation is around 55:40, and the disclaimer acknowledges the things they are 'estimating':

...obviously we don't know details of skin color, and eye color, and hair color but we've estimated as a best guess based on the period of time...

So no claim to ' historical accuracy' of the (lack of) hairstyle has been made. The final result 56:18 looks like this: 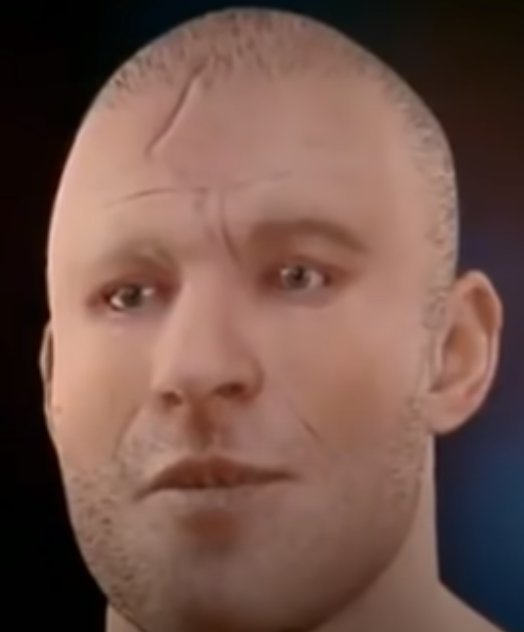 The female figure you mentioned in comments was not reconstructed during this documentary. I can find not information on this female figure other than an entry on a blog style site, Medievalists.net. 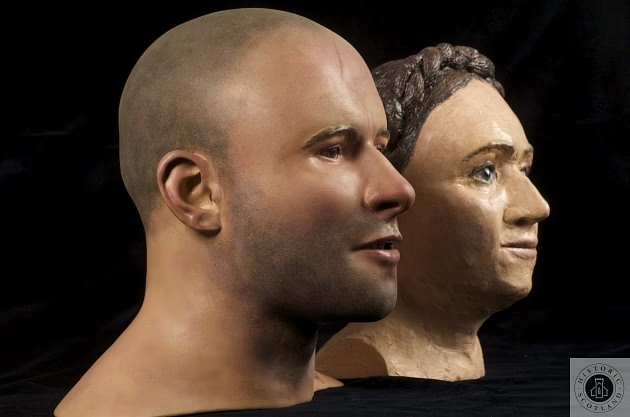 You can see the image of the female figure appears a completely different style, perhaps a sculpture. It would appear that the female figure was done at a different time, by a different process and artist. Without information on that items creation, its useless to try and compare 'historical accuracy' from one item to the next. (I suspect the female bust is an artists creation, and not the result of forensic science.)

(the Medievalists.net site does credit the image to Historic Scotland, which is the agency overseeing the renovations at Stirling Castle, so perhaps when the exhibitions are fully open, more information on the source of the female reconstruction will be forthcoming.)

So, the image generated of the Stirling Man, was a forensic computer recreation using scientific procedures to represent what could be concluded from the information at hand. The 'shaved head' isn't representing a deliberate style source, but shows the desire not to add unsubstantiated information that can't be supported.

I think the reconstruction says more about modern tastes than medieval ones. We obviously have no direct evidence for the knight concerned, and judging from the article, it 'may be' an English knight known to have died around the right time. 'May be' tends to suggest hope rather than anything close to reliable evidence.

You really have to look at portrayals of English aristrocrats from the 14th century. In my experience, shaven heads are very uncommon, and if anything relatively long hair was far more 'normal'. You get the Henry V 'bowl cut' in the 15th century (but that may be based on 16th century artistic tastes, not Henry's, although there is a near contemporary image of him with bowlish, but blond, hair). There are a bunch of images from around the right time of aristocratic figures which are typical of portrays of hair in the 14th century. Monks had tonsures, but knights and kings had what we'd consider 'normal' length or long hair. Given the number of images of kings with long hair on coins, one could surmise that long hair may have been associated with status, and short hair did not.

With facial reconstructions, I think there is often a temptation to 'humanize' the subject by giving them a look that makes sense to modern eyes, or reflects a point the reconstructor (or the person paying their wages) wants to make - hence the designer stubble instead of a bald 'we don't know' look, or a weird medieval wig. They've done the same in recent years with Robert Bruce, who has had a bunch of facial reconstructions, all of which one might suggest ended up looking how the current historical trends wanted him to look ... either noble and visionary, disfigured with a case of advanced leprosy, or a haggard tough guy.

Sprucing up Robert the Bruce

Not the answer you're looking for? Browse other questions tagged middle-ages europe or ask your own question.

32
Where does the name of the country "Belarus" come from?
9
What buildings could be found in the inner ward of a castle?
8
Has the Scythe ever been used as a weapon?
11
Was rape common in Europe during the Middle Ages?
25
Has there ever been an archbishop or bishop younger than the 16-year-old James of Nicosia?
8
A question about the definition of heresy (13th. C)