Was there a fighter jet designed without cannons?

I have heard in the past that there was a jet fighter somewhere in the Korean War time (might also have been Vietnam) that didn't have any onboard cannons since at that time it was believed that air-to-air missiles made cannons obsolete. That fighter then had a bad reputation because close-range dogfights did indeed unexpectedly ensue and it was quickly realized that the lack of cannons was a big problem.

I think it was a US-produced plane.

Does anybody remember reports of such a plane (or maybe it's even more than one, as in a problem of a whole generation of jet fighters).

Update: Just found this post on the Aviation Stack Exchange site which answers my question

"Was there a fighter jet designed without cannons?" is a bit different from Why do fighter jets still have guns/cannons? which focuses on just the F-4. The obsession with missiles started a bit before the F-4.

During WW2 and the Cold War bombers got faster, flew higher, and carried increasingly destructive bomb loads up to and including nuclear bombs. Prior to ICBMs and submarine launched nuclear missiles, bombers were the primary way to deliver nukes. The need to stop every single one of these high, fast, lethal bombers before they reached their targets created the need for the "supersonic interceptor".

In the 1950s, guided air-to-air missiles were just entering production. The US had the heavy Falcon, the radar guided Sparrow and the infrared guided Sidewinder. Flush with the possibilities of these unproven wonder weapons, the idea of an interceptor armed with a quiver of guided missiles shooting down entire bomber formations took hold. Unfortunately, the missiles would not live up to this optimism, and it would take decades to make them effective weapons.

Well before the iconic and ironic F-4 Phantom II, the US dabbled with missile only fighters. These were supersonic darts designed to speed their way to a bomber formation, fire their Falcon missiles, and speed away for beer and medals. Unfortunately, the Falcon was hopeless.

The US Air Force's first supersonic interceptor was the F-102 Delta Dagger. It carried six of the hapless Falcon missiles internally, or two of its terrifying nuclear variant. This "1954 Interceptor" had so many problems it wasn't in service until 1956. The F-102 would become the F-106 Delta Dart and finally in 1972 received an internal gun as part of Project Six Shooter. 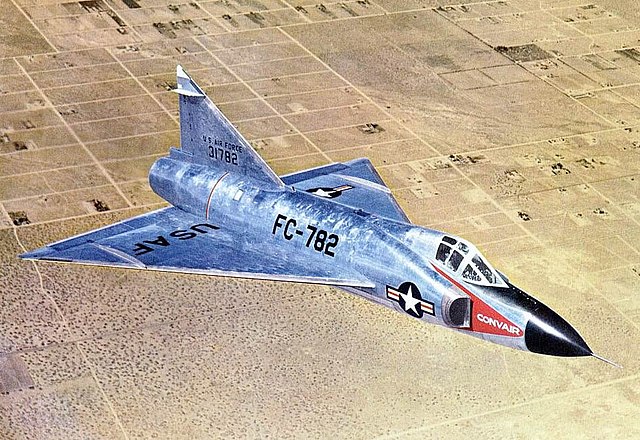 While they were ironing the bugs out of the F-102, the US Air Force cast about for a stopgap. The fell upon the F-101. The F-101 was originally designed as a long-range bomber escort like a supersonic P-51 Mustang with guns. These characteristics also made it a good interceptor. The guns were omitted and replaced with four internal missiles firing the hopeless Falcon and later the nuclear tipped AIR-2 Genie to create the F-101B interceptor. 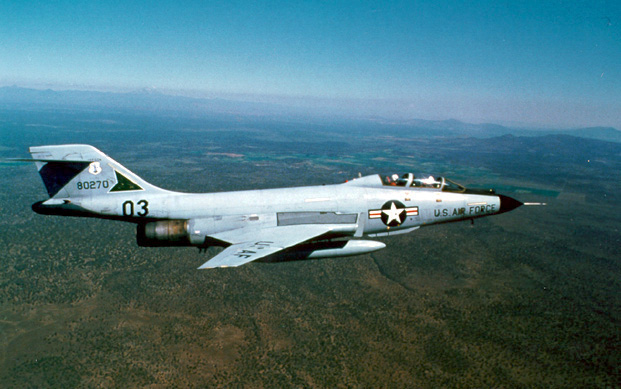 Finally, the F-4 Phantom II. It was designed to be the US Navy's interceptor, and it could do a lot of bombing itself; the F-4 could carry more bombs than all but the heaviest WW2 bomber. It was heavy, fast, and carried up to 8 missiles; originally the heavy Falcon and the medium Sparrow and later the more reliable Sidewinder. 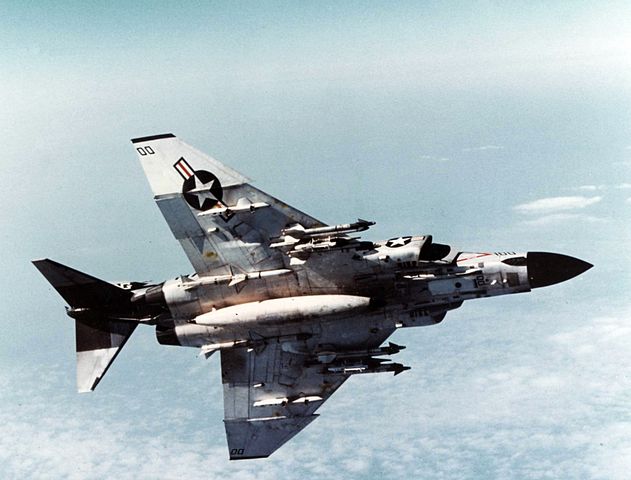 The apex of Missile Mania was the F6D Missileer concept. The D meant Douglas, the designer, not the 4th variant of the F6. Basically a flying missile battery, the slow Missileer would loiter above a fleet ready to fire its six heavy, long range, possibly nuclear missiles at incoming bombers, and then land for bug juice and medals (no alcohol on US Navy ships during this period). 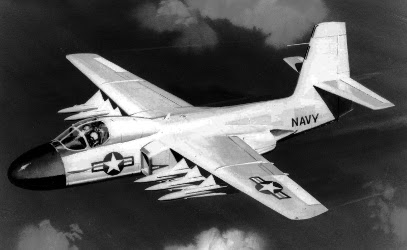 It and its Eagle missiles never left the drawing board, but the concept would result in the heavy AIM-54 Phoenix missile and a heavy interceptor to carry them and the large radar to guide them: the cancelled F-111B and its cooler younger brother the iconic F-14 Tomcat. 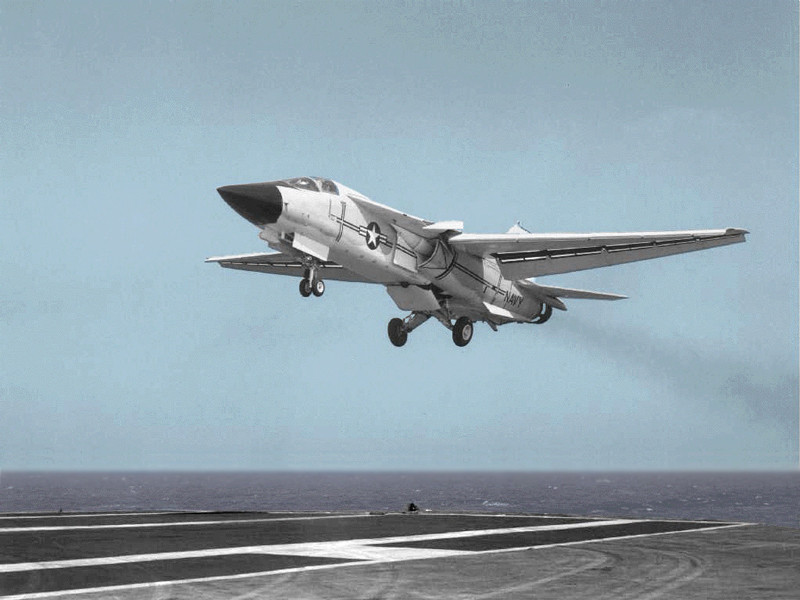 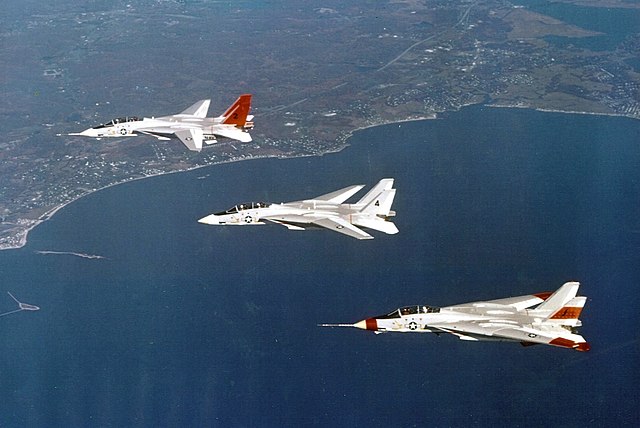 But the waves of Soviet bombers never came. They pressed their supersonic interceptors into service as bomber escorts and tactical bombers in Vietnam. These interceptors faced off against small, maneuverable Soviet fighters like the MiG-17 and MiG-19 which they were not designed to fight and initially fared very poorly against.

The AIM-4 Falcon provided incapable of hitting much of anything and was withdrawn. The AIM-7 Sparrow, designed to shoot down bombers, required the firing aircraft maintain a radar lock and, despite numerous improvements, performed poorly against maneuverable fighters. It's the AIM-9 Sidewinder which eventually lived up to the promise of being able to hit a maneuvering aircraft; its independent infrared seeker could home in on a hot enemy aircraft's engine. With constant tweaking it's still in use today.

Despite improvements, missile performance remained poor during Vietnam. Externally mounted guns were added as a stopgap. The F-4E Gunfighter would finally improve the technological problems by including an internal gun, better radar, and the now familiar Head Up Display (HUD).

But the biggest problem was training. US pilots were not trained for this sort of dogfighting; dogfighting was supposed to be dead, the missile was supposed to be king. Their heavy aircraft could not win a traditional turning, twisting dogfight. Instead, the US had to develop new tactics to take advantage of their strengths and exploit the enemy's weaknesses. The F-4 could outrun and outclimb a MiG, they adopted hit-and-run or boom-and-zoon tactics. Rather than get into a turning battle to keep on a MiG's tail, the F-4 would control the engagement by making one pass at the slower MiG and then climbing away at high speed to safety. The MiG would be unable to follow. The F-4s could repeat these passes at their leisure.

To ensure these skills were not lost again, the US military introduced fighter schools to train pilots to fight against enemy aircraft: the famous US Navy Fighter Weapons School aka TOPGUN and the less famous US Air Force Weapons School.

The two JSFs have an external pod with a cannon that they can carry by giving up something else.

The FA-18G growler loses the cannon so it can carry more computers to process signals.

The type of pods that could be carried on the JSF instead of a gun is a rear radar or a reconnaissance pod.

PS: One requirement of the JSF program is to provide combat air support replacing F-16s and A-10s. So a gun is needed for that reason.

This was a problem with an entire generation of jet fighters, mentioning a selection of the most used ones here:

Some of these had a later variant with builtin gun, some had the problem solved with gun pods, a majority finished their service without any guns.

2
Was There Compensation For Requisitioned / Impressed Aircraft In WW2?
4
Did the United States taxpayer fund the development of China's backbone fighter plane?