When did Dei gratia/fidi defensor first appear on British coins?

Answering When and how did the British Monarchy stop claiming Divine Right made me realize that I don't know when this first appeared.

numismatics great-britain
Share
Improve this question
edited May 16 at 3:39

The title Fidei Defensor abbreviated to F.D. (Defender of the Faith) occurs for the first time on the British coinage under George I.

The earliest example is from the very beginning of his reign, in 1714. 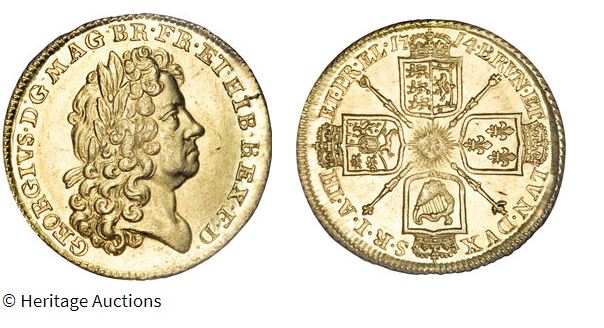 The inscription appears frequently on coins from here on. For example, a 1722 silver shilling reads (obverse): 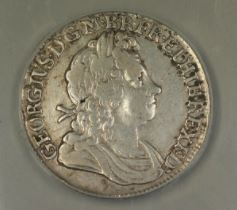 However, not all coins during his reign bore this inscription: see this 1722 farthing, for example.

The terms "dei gratia" or "gratia dei" (followed by "rex") on coins can be dated back much earlier, to Anglo-Saxon times. For example, it was used by Coenwulf of Mercia (reigned 796 to 821). It was also used by the Normans and their successors, though not on all coins.

A paragraph in the Wikipedia page for King James VI & I is somewhat poorly phrased in that it implies James used Defender of the Faith on coins. However, the sources cited (Willson 1967 and Croft 2003) do not say that; rather, they are referring to the use of the title King of Great Brittaine (which was controversial). Nor can I find any James VI or I coins with D.F..

Not the answer you're looking for? Browse other questions tagged numismatics great-britain or ask your own question.

6
When were Roman Emperor's faces placed on coins?
8
Why did overestimated coins led to inflation and well-estimated coins to deflation?
1
Did Mesopotamia have coins to represent Gerahs & Minas?
25
When and where were the first coins made showing the currency or a face value?
11
What happened to the coins in ancient Greece and Rome when monarchs changed?
22
Did firing trials of pre-WW1 British dreadnoughts involve actually firing at them?
10
When in September 1939 did the British diplomatic mission leave Warsaw?
9
When and why did round coins become a practical standard?
8
Why did the coins of England minted under Richard I and John bear the name of Henry?
4
When dubbing a knight why is the right shoulder dubbed first?