What are the best primary textual sources I could point to regarding the existence of Julius Caesar? [closed]

Ask Question
Asked 5 months ago
Active 5 months ago
Viewed 676 times
4
Closed. This question is off-topic. It is not currently accepting answers.

I recently got in a discussion with a man claiming that there is more reliable historical proof of the existence of Jesus Christ than of Julius Caesar.

On face value, this claim seems ridiculous — ignoring everything else, one would think that an emperor, politician, general, etc. of one of the most powerful nations in the world living around the same time would have left tremendously more reliable proof of his existence than a leader of, at the time, a minor religious group.

The unfortunate thing about trying to find the answer to this question by myself is that, when I search for proof of Caesar etc. on Google, the results page is covered by heavily religious websites, seemingly repeating this argument, but without good sources (apart from references to other religious books), and most of them look as if they were from mid-2000. (My guess would be it was a popular argument at some point?)

Wikipedia has a list of primary sources, but, according to this person, they don't count because the oldest copy of, for example, Julius' works about his conquest of Gaul were copied 600 years after his death, so they are more likely a fabrication/fake than the Bible, so seemingly only "old" manuscripts count.

Side note: Finding information on how old the oldest manuscripts of the Bible are is very easy, finding the same information about any books in the primary sources list on Wikipedia is the opposite.

So my question is, what are the best primary sources I could point to regarding the existence of Julius Caesar, where only manuscripts/objects from the period "count" (so, if a historian who wrote about him was a contemporary, but the oldest copy of the work we have is from 500 years after, it doesn't count, also coins with his face don't count apparently).

I just found the topic interesting. I would also be grateful for hints on how to best find this type of information in the future.

ancient-history ancient-rome historiography
Share
Improve this question
edited May 18 at 10:59

The claim to analyze and compare here is that for 'mentioning Jesus' we have many more existing manuscripts that are much older than many and most manuscripts for almost any other historical person of antiquity. And that overly specific claim is correct.

If we just compare Caesar with Jesus, in that way, Caesar almost loses. "Almost", since the bulk of manuscripts by Caesar or about him undoubtedly are lost now. However, one tiny and exceedingly rare counterexample is shown below.

The oldest fragment for 'Jesus' is the recto of the Rylands Library Papyrus P52, 𝔅52 / 𝕻52: 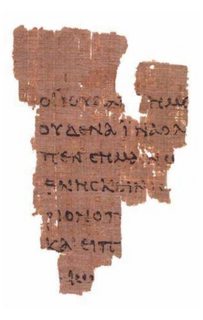 And this is dated to be an 'original copy' from between first and 3 century. Note that the actual word 'Jesus' is missing in this piece, but assumed to be 'has to be there' from later and more complete papyrii. For a direct evidence of that word we need to look at the slightly younger 𝕻90, in which we find the part of the Gospel of John that mentions Jesus wearing a crown thorns.

Compared to for example Caesar's Commentarii de bello Gallico one might argue that this is seen as at least being from Caesar himself as the original author.

But unfortunately the oldest known manuscripts for this work date only to the ninth century.

Caesar's literary fame in modern times is founded solely on the comm., which were published posthumously in the Middle Ages as part of the Corpus Caesarianum; rarely read in antiquity, they survived in a late-antique MSS (corrected in the BG ?), which in the Middle Ages was transmitted in a few copies, mainly in France.

And that caesarian literary heritage of bello Gallico is summarised as:

There are 6 early witnesses to the alpha family. Two derive from a common lost ancestor: these are:

The Klotz edition of 1950 used 8 mss, although at least 3 of these are now considered to be non-primary. The five are: 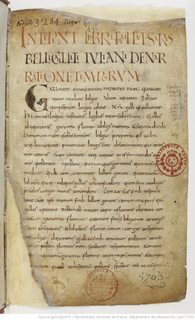 The same applies to other authors writing about Caesar: their works are sometimes known to us today but, the historical literary transmission of ancient texts is much sparser and temporally more removed from the actual time they lived than New Testament writings. Most of the manuscripts containing information about 'profane' historical figures are high and late medieval copies.

Of course:
one of the best contemporary primary sources for providing historical proof of Caesar's existence would be to point to more robust than papyrus material remains, like inscriptions in stone or metal, perhaps even a coin that the man had issued himself, sometimes with his name or even head on it.

A thing we're told Jesus didn't care for that much.

This answer so far avoids 'the question in title on purpose'. The 'best primary sources for the existence of Caesar' is really a XY-problem. Answering the title question as is, would mean that 'claimant to be disproven' and OP will talk past each other, largely.

We have comparatively 'hard' objects which point to Julius Caesar directly, like CIG 2957:

However, there probably is one striking example fulfilling all the requirements needed to get a surviving manuscript from the time of Caesar's assassination:

The Oldest Surviving Manuscript of Latin Poetry Was Discovered in Qasr Ibrim — Circa 50 BCE to 25 CE. 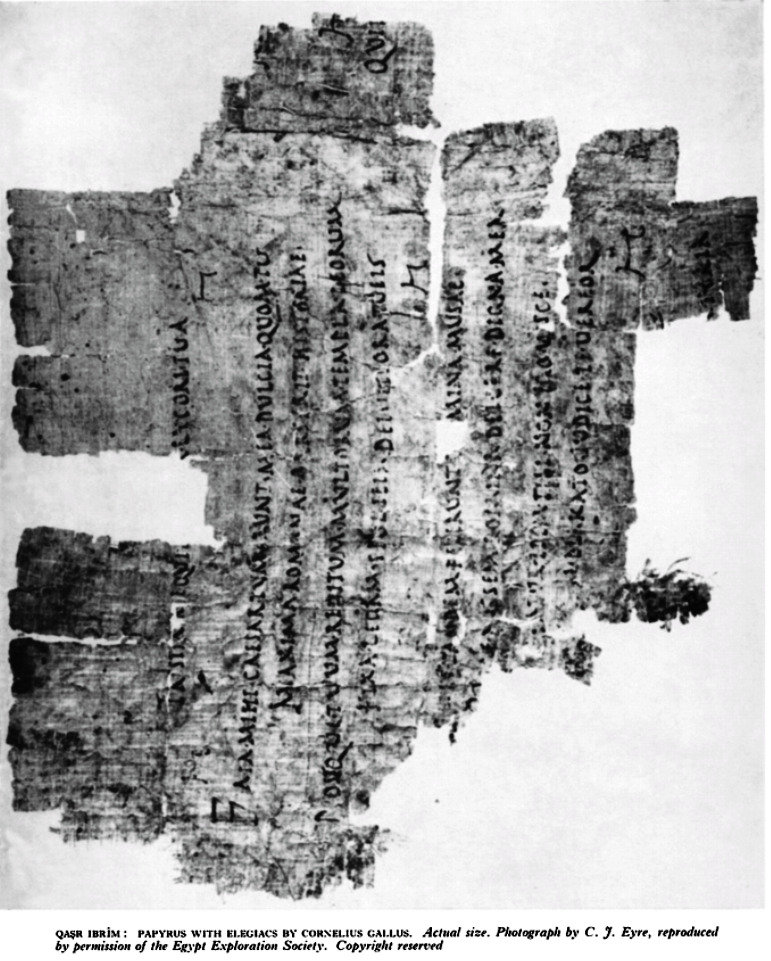 "The book can be dated from its archaeological context, more precisely (c.50-20 B.C.) or less precisely (c.50 B.C.- A.D. 25). It therefore provides one of the few fixed points in the early history of Latin literary scripts."

But what the claim brought forward alludes to is the undeniable fact that for a text from classical antiquity the literary transmission of New Testament writings is indeed remarkably well, in many cases going back far with little variants and alterations as evidenced from the oldest copies we did find. The vast body of classical literature seems to be present in our finds only in often much younger copies, and with fewer copies. Some of those then also with heavy disagreements between them.

For literature from classical antiquity the claim has a sizable kernel of truth to it. Many of the otherwise seemingly well known historical figures can be seen as being harder to ascertain as being 'real' than the main protagonist of the gospels, if going by oldest surviving manuscripts alone. Unfortunately, that on its own doesn't even prove the existence of said protagonist without remaining doubts…

At the beginning of this answer, we read "almost any other historical person of antiquity". Since that claim is often phrased as "better evidence for (absolutely) any other historical figure", and meant to convey 'any source material at all included' we see that this special viewing angle is then taken to extreme exaggerations that is simply untrue.

A more fitting comparison would be to compare literary transmission for Sokrates and Jesus and the value of this transmission history for 'judging things'. Known basically only through writings about him, mainly by his disciple, whose writings are of quite late provenience, etc. That would not prove anything either on its own, but illustrates the sometimes differing scales that are applied in these matters in disputes.

This claim not only seems ridiculous but it really is ridiculous. About Ceasar we have plenty of contemporary sources, and they are not limited to later copies of ancient texts. There are coins, inscriptions on stone, etc. And finally, a lot of texts. It is true that all texts that we have are actually later copies of the originals but the point is that they are all consistent with each other, and can be corroborated in many ways.

On the other hand, on Christ we have only gospels written many years after his supposed death, and one sentence in Josephus. The gospels themselves are not trustworthy, since they describe miracles etc., and contradict each other in details.

Not the answer you're looking for? Browse other questions tagged ancient-history ancient-rome historiography or ask your own question.

30
How to rebut Holocaust denial argument?

9
How do historians treat gossip?
18
What historical evidence is there for the existence of Jesus Christ? What do we know about him?
10
Was Marc Antony with Julius Caesar when he crossed the Rubicon?
8
Were the greatest rulers from before the Classical Antiquity known by ancient historians?
10
How was the Roman army in fact organized during Caesar's campaigns in Gaul?
20
How did Christianity replace Roman Paganism and other ancient religions?
32
Did ancient Romans anticipate the fall of Rome?
4
How were ancient Indian mathematical texts found to modern scholarship?