How did medieval cities get rid of waste?

What I am trying to get to is that many video games have a sewers level. To my understanding, these aren't as realistic as we'd like to think (too big or sewerage wouldn't exist yet in the settings timeframe; you name it). I know of the idea of cesspits, but modern cesspits don't tend to be in cities, and are well regulated by laws.

If you were to think of a medieval (anything from 12th century to 15th century) city, with quite a high population; how did the major cities handle waste disposal? Did they use a cesspit? Because if so, I am already filled with a bunch of questions:

Basically, I can't picture what waste disposal and going to the toilet is like in those times... And I dislike the idea of giant tunnels called sewers where you can walk among the turds. Correct me if I am wrong, but that seems like a game design to me rather than an actual historical practice.

(ps. I do understand that they might not have entirely known what we'd consider best practices. There is a reason why we've had the Black Death and the like: people wouldn't have known what we know about hygiene.)

Active Oldest Votes
6
Share
Improve this answer
answered May 20 at 16:25

you could take the German town Freiburg as an inspiration. They had small canals on the sides of the streets in which they poured the grey water. they also used the water in them to stack fires. 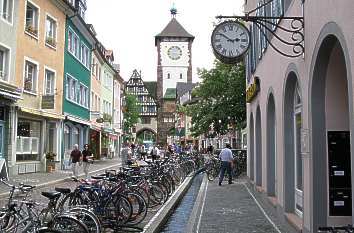 Trier is one example of a city which for a long time used the old Roman waste water system (ie sewer.) Trier is built at a slope with a fairly stable water resource upslope. That water was used to continuosly flush the sewer piping.

16
How were medieval guilds formed?
35
How did cities operate in medieval times?
3
What specific training did members of medieval military orders get?
12
How accurate did medieval historians think histories to be?
6
How did medieval serfs obtain their iron goods?
5
How were cities administered in the early Byzantine Empire?