Does anyone recognize the identity and location of this octagonal structure? 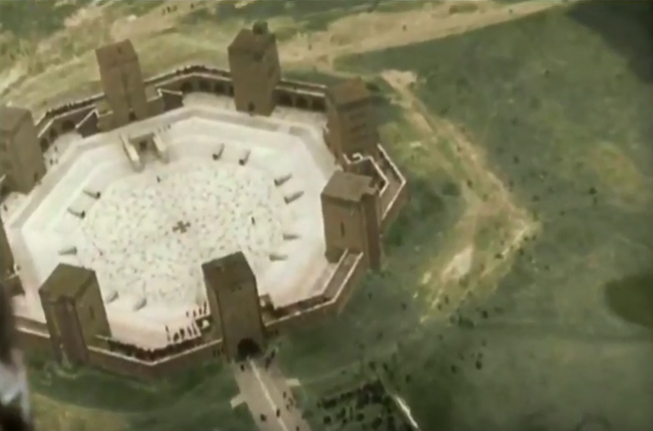 The attached picture is from the video Unique color footage of The Graf Zeppelin and Hindenburg - YouTube at about 2:52. It is of an octagonal structure, possibly in Nazi Germany. Not sure if the design at the center of the structure is a swastika. I would appreciate any information about its identity & location.

This was the Tannenberg Memorial, built near the town of Hohenstein, East Prussia (now Olsztynek, Poland).

Built in the mid-1920's, it was a monument dedicated to the German soldiers who fought in several battles in the area (two in WWI, and one from the 15th century). The design in the center is an iron cross, a symbol originally from the Kingdom of Prussia but heavily used by Nazi Germany, and the whole site was designed to look like a medieval castle on a large hill.

Although it was initially intended to be a sort of tomb of the unknown soldier, in 1934 German general Paul von Hindenburg was buried there, and it became a site of pomp ceremony and military propaganda for Nazi Germany. In 1945, Hindenburg's coffin and several other items were removed from the site to protect them from advancing Soviet forces, and withdrawing German forces partially demolished the monument and collapsed several of the towers. In 1949, the Polish government decided to dismantle the remains of the monument, and today the site is little more than a grassy field.

This is the Tannenberg Memorial near Hohenstein, East Prussia (now Olsztynek, Poland). This was conceived as a memorial to German Soldiers at the two Battles of Tannenberg, one in 1410 (where Poland-Lithuania under Jagiełło crushed the Teutonic Knights) and the other in 1914 (where the German Empire under Hindenburg defeated the Russians). It was really a sort of triumphal monument to the still-living Hindenburg, who was later buried at the site. That's an Iron Cross in the center.

It became a focus of German nationalism during the Nazi era, but as the Red Army advanced into East Prussia, the bodies of Hindenburg and his wife were disinterred, and the monument partially demolished by retreating German troops. The monument was mostly dismantled by the Polish government in 1949, and by 1980 there were no traces left.

7
Can anyone confirm the identity of these WWI uniforms?
14
Does anyone know what type of structure this is?
4
Can anyone identify this uniform, the rank and if possible the date?
5
Does anyone recognize this uniform?
11
Where is the location of this large stump and monument (lighthouse?) background?
7
Does anyone know the history on this artillery shell I found in my grandfather’s shed?