Today national health protection agencies around the world such as CDC in United States often issue health and personal hygiene guidelines during pandemics or epidemic or where a large population of a nation is under threat from a particular disease.

Do kingdoms (kings and their ministers, health officials) used to issue health related guidelines, warnings such as do's and don'ts to the public regularly or in times of epidemics etc. in the medieval period.

Although the question is not limited to it, but I am especially interested in medieval Europe and Britain.

I know heralds, pamphlets and posters were some of the mediums to address to mass public back then, so how such messages were transmitted to public?

So is there any record of any public health, personal hygiene guidelines issued by kingdoms, kings in medieval times, especially from Europe and Britain?

Note — The question is not mainly about medical guidelines(also called a clinical guideline, standard treatment guideline, or clinical practice guideline) but it will be a good supplement to answer about those as well.

Missum imperatori de pestilentia is one such guideline, written in 1371 for the emperor Charles IV for dissemination.

It was based on the Paris Plague Concilium Tractate of 1348 written by the faculty of medicine members for king Philip VI of France.

In contrast to what is emphasized on that wiki-page, it not only contained some 'scientific' explanations, but also guidelines for the healthy.

Since this founded a European tradition of thought for such occurrences, its basic recommendations are found in countless later Regimina sanitatis or Regimen pestilentiae.

One such pest-regiment is on WP as 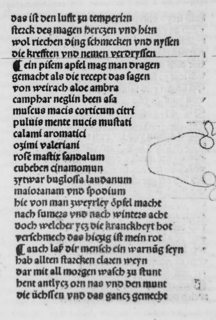 A page from the "Pestregiment" (1482) by Hans Folz. Source: Renate Smollich, "Der Bisamapfel in Kunst und Wissenschaft". Deutscher Apotheker Verlag, Stuttgart 1983.
(LLC: This page mainly a didactic poem on the proper ingredients for a Bisamapfel/Pomander, a ~'scent-apple', used for it nice smells and the preventative and curative powers the ingrediente confer. Depending on the ingredients used, this was more than just 'aroma-therapy'.)

Don't get the contagion, avoid infected, avoid getting poisoned, by:

A direct descendent of the Paris tractate would also be found in — Karl Sudhoff: "Ein deutsches Pest-Regiment aus dem 14. Jahrhundert", Archiv für Geschichte der Medizin, vol 2, no 5, 1909, pp379–383. (That author was a collector of such 'regiments', a German version of Missum imperator pestilentiae is here.)

These guidelines and recommendations were copied and slowly expanded when republished as letters or short pamphlets. The Missum imperatori pestilentia adds basically these recommendations:

Towards the end of that period the first printed medical text in German language was then of this exact genre:

Directed at the common man in that city, it consists of two parts. The first part explains what the illness is, and how to avoid and prevent it, the second part is then telling doctors and pharmacists how to treat actual illness.

Tacuinum Sanitatis aimed at a cultured lay audience, says that illnesses result from imbalance of: "sufficient food and drink in moderation, fresh air, alternations of activity and rest, alternations of sleep and wakefulness, secretions and excretions of humours, and finally the effects of states of mind."
It was an 11th century Arabic treatise whose translation into Latin was commissioned by King Manfred of Sicily.

The Regimen [Sanitatis Salernitanum] is believed to have been written in the 12th or 13th century, although some sources estimate this to have been as early as 1050. Even though the book bears the name of the famous medieval medical school, it is not certain if it originated there. According to tradition, the poem was written for the benefit of Robert Curthose.

The — Regimen sanitatis Salerni. This boke techyng al people to gouerne them in helthe, is translated out of the Latyne tonge in to englishe by Thomas Paynell. Whiche boke is as profitable [et] as nedefull to be had and redde as any can be to obserue corporall helthe. To the ryght excellent and honorable lorde Iohū Erle of Oxforde / and hygh chamberlayne of Englande Thomas Paynell gretynge. 1311 is a 1528 English translation of a 14th century Italian (Latin) text out of the Salerno school of medicine.

One famous source for life during medieval pandemic is the introduction of Boccaccio's Decamerone, which describes the Black Death in Florence in 1348:

And against this pestilence no human wisdom or foresight was of any avail; quantities of filth were removed from the city by officials charged with the task; the entry of any sick person into the city was prohibited; and many directives were issued concerning the maintenance of good health.

If you count quarantine measures (in the sense that travellers cannot enter a port or city before waiting a number of days without getting sick), those were also imposed by local authorities. The word "quarantine" itself stems from the 15th century, but a "trentine" (30 days) was already practiced in the 14th century.

It was a little after the medieval period (though very British), but King James' A Counterblaste to Tobacco from 1604 is an oft-cited early example of public health guidance and one of the earliest texts to specifically identify specific health risks of smoking (emphasis mine below). It also identifies smoking as a poor social skill and alludes to its addictive nature. It also (very interestingly!) compares some possible medicinal value of tobacco with "abuse", foreshadowing the modern distinction between drug "use" and drug "abuse".

Have you not reason then to bee ashamed, and to forbeare this filthie noveltie, so basely grounded, so foolishly received and so grossely mistaken in the right use thereof? In your abuse thereof sinning against God, harming your selves both in persons and goods, and raking also thereby the markes and notes of vanitie upon you: by the custome thereof making your selves to be wondered at by all forraine civil Nations, and by all strangers that come among you, to be scorned and contemned. A custome lothsome to the eye, hatefull to the Nose, harmefull to the braine, dangerous to the Lungs, and in the blacke stinking fume thereof, neerest resembling the horrible Stigian smoke of the pit that is bottomelesse.

My "modernization" of the above (not really a translation since it was already in Modern English, but rephrased in a more 21st century manner):

You should be ashamed of yourselves and quit this filthy habit that you were foolish and stupid to get into. By abusing tobacco, you sin against God and harm both your health and your finances. You also look vain and foreigners stare at, scorn, and condemn you when they see you smoking. Smoking is bad for the eyes, nose, brain, and lungs, and looks like the smoke that rises from Hell.

While this document lacks the medical precision of more recent guidelines, it is a clear example of public health guidance of yesteryear - a document issued by a king, not as regulation, but as guidance to encourage healthy behavior in his subjects.

Also do read its 17th century depiction of drug addiction, still quite easy to understand today and also substantial documentary evidence that drug addiction was well-known hundreds of years ago:

And from this weaknesse it proceeds, that many in this kingdome have had such a continuall use of taking this uusavorie smoke, as now they are not able to forbeare the same, no more then an olde drunkard can abide to be long sober, without falling into an uncurable weaknesse and evill constitution: for their continuall custome hath made to them, habitum, alteram naturam: so to those that from their birth have bene continually nourished upon poison and things venemous, wholesome meates are onely poisonable.

My "modernization" of the above:

This weakness is evident in the fact that so many people in this kingdom have been smoking this unsavory substance for so long that they can't quit without getting sick, just like alcoholics can't quit drinking. Their constant smoking has turned their habit into their nature, just like those that have grown up consuming poison and venom find that healthy food is poisonous to them.

Robert Columbia♦Robert Columbia
3,30522 gold badges1717 silver badges3535 bronze badges
2
Add a comment  |
-4
Want to improve this post? Provide detailed answers to this question, including citations and an explanation of why your answer is correct. Answers without enough detail may be edited or deleted.

We've had some Covid 'guidance' that was mandatory, so I'll merge guidance/rules in this answer.

A useful trick was to make the 'guidance' a religious matter. Sidesteps all that personal judgment question about whether guidance should be followed or not. As the bible says, pork, camel and rock-badger are unclean meats.

Not the answer you're looking for? Browse other questions tagged middle-ages public-health health hygiene or ask your own question.

33
How were the cities of Milan and Bruges spared by the Black Death?