What murals and decor might have been present in the earliest Sumerian temples?

So, for the sake of a production I'm working on a lot of digital artwork meant to represent a slightly-fantastic, but based in fact, representation of ancient Sumeria. Think 5000 years+ ago; dawn-of-history level. (Specifically it's a portrayal of the Enuma Elish creation story, but it needs proper suspension of disbelief. I'm willing to let some things slide, but there can't be any glaring flaws.)

I'm just about to the point that I'll be inscribing cuneiform on temple walls, and what I would like to know from fellow history buffs and historians on this forum is, what would they likely portray or be about? I specifically do not want to reference any cultural or spiritual codex which would not have existed near the very dawn of Sumeria (think foundation-of-Babylon level).

[The thing is, I realize that in reality, in the absence of a city we likely didn't actually have any temples at all, certainly not heavily organized ones. Little things like residences and agriculture tend to show up before that. So, by necessity this is going to reach into fiction slightly; and may also be a good question for World Builder's Stack Exchange.]

The culture of Sumer has, by all of my research to this moment, been rather direct about much of its terminology and tradition. Its word for "king", lugal, literally translates to "Big Man". (Yes, "Big Man" Hammurabi, father of laws. They were not being sarcastic or snarky. Let that sink in for a moment.) The ritual of Šurpa, for resolving curses of unknown origin, was basically a public apology for everything you may have screwed up in the past and a promise to do better, followed by some disposable symbolism with a little garlic or wiping with dough. (I have to admit I love these guys.) There also likely was no precedent to follow for even having temple decor; I suspect they were more like community centers.

So in the earliest temples we have record of, what was the traditional decor like? What did it portray? Before we had religion as we know it, what did people cling to spiritually?

As a quick note on chronology, "5000+ years ago" would put your setting in the Jemdet Nasr period or earlier (Uruk III–V; yes, archeological periods are numbered backwards).

This is around the time when the earliest forms of "cuneiform" writing first evolved out of pre-literate pictographs used for accounting, and the signs used at the time looked quite different from later cuneiform. In particular, I'm putting the word "cuneiform" in scare quotes here, because this time period actually falls right in the middle of Sumerian writing evolving from a "linear" style to a "cuneiform" style as scribes increasingly simplified the signs, which were originally rather detailed and pictorial line drawings, and started composing them out of wedge-like line segments made by pressing the side of the stylus into clay.

In other words, if you want your temples to feature period-appropriate writing, don't think this: 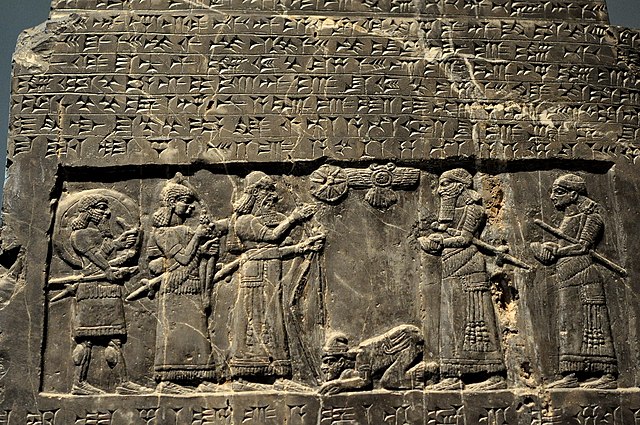 The upper 1st (top) register, side A, of the Black Obelisk of Shalmaneser III. Neo-Assyrian period, 825 BCE. Photo by Osama Shukir Muhammed Amin FRCP(Glasg) via Wikimedia Commons, used under the CC-By-SA 4.0 license. 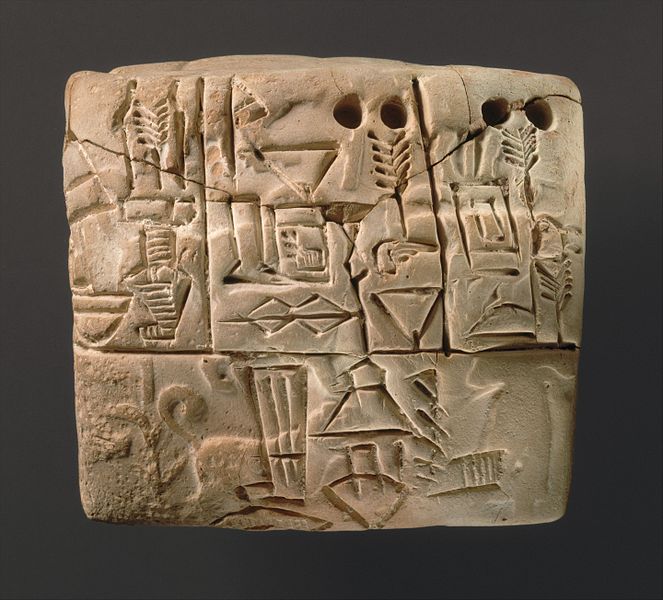 Administrative account of barley distribution with cylinder seal impression of a male figure, hunting dogs, and boars. Probably from the city of Uruk. Jemdet-Nasr period, c. 3100–2900 BCE. Photo donated to Wikimedia Commons and dedicated to the public domain by the Metropolitan Museum of Art. 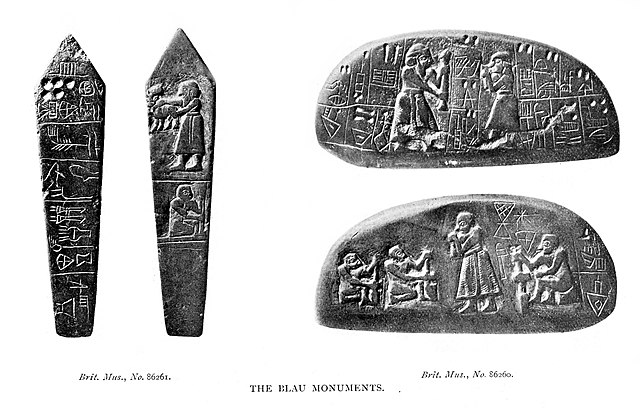 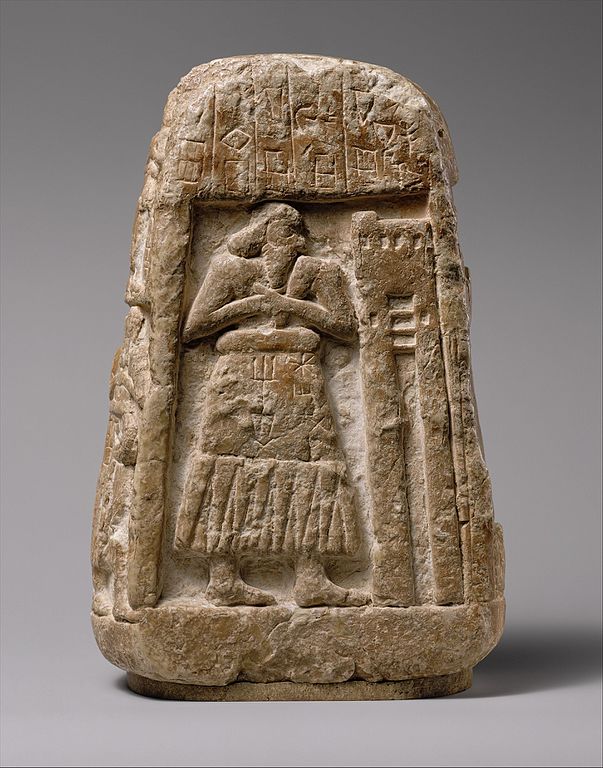 The Stele of Ušumgal. ED I–II period, c. 2900–2700 BCE. Photo donated to Wikimedia Commons and dedicated to the public domain by the Metropolitan Museum of Art.

Ps. The Wikipedia links above should take you to a bunch of images of period-appropriate inscriptions and statues. For more images, consider searching museum collections or the CDLI for objects from the appropriate periods. (Note that CDLI doesn't recognize "Jemdet Nasr" as a distinct period, but searching for e.g. "Uruk III" or "ED I-II" gives you objects from c. 5000 years ago.)

Note that most if not all of these statues and reliefs would've originally been painted in bright colors. Most of the pigments have just decayed or rubbed off over the millenia, leaving us with limited evidence of their original colors. For some reconstructions of the original colors in ancient Mesopotamian sculpture, you could take a look at the recent book Mesopotamian Sculpture in Colour (ISBN 978-3-935012-42-3) by Astrid Nunn and Heinrich Piening (eds.) published last year.

One well known example of artwork from this period with (partially) preserved colors is the so-called Standard of Ur, a wooden box with colorful mosaic decorations depicting scenes of warfare and a court banquet. The striking blue and red colors of these scenes have survived, as instead of paint they were made with inlays of lapis lazuli and red limestone respectively. Some boards for the "Royal Game of Ur" with colored inlays have also survived. 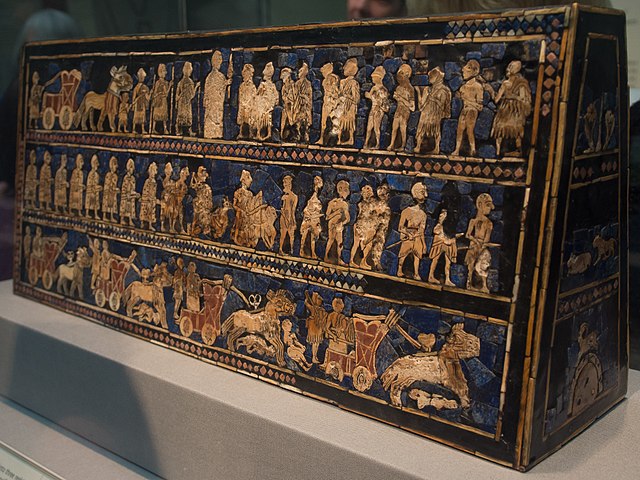 The "Standard of Ur" on display in the British Museum. Early Dynastic period, c. 2600 BCE. Photo by Denis Bourez via Wikimedia Commons, used under the CC-By 2.0 license.

Not the answer you're looking for? Browse other questions tagged architecture ancient-babylon tradition sumer temples or ask your own question.

2
Where did the masquerade ball come from and what was its original concept?
28
What is the earliest known account of the modern military salute?
10
What are the highest and biggest half-timbered buildings built during medieval era?
3
Are there any palaces, temples or monuments built by the Seleucids surviving through to the present day?
9
What did they call Gothic and Baroque architecture before the modern terms came into use?
18
What would the Arch of Titus have looked like painted?
11
What actually happened in Greek and Roman temples of healing?
6
What materials would have been used in the ancient Mesopotamian crown?