Grajewo was near the Prussian border. It also had a railway station but I don't know its route.

As I understand it: There were several lines that can be used traveling from Bialystok to Bremerhaven switching trains, having to stop at control stations.

Travel could also be done starting at Łomża or Ostrołęka – I don't know which one would be better. I heard going to Könisgberg first was a possibility.

How long would these routes take?

There are indeed several options to consider.

The first would be that Grajewo was in Poland (Russian Empire), and thus in 1917 largely destroyed and in German hands since September 1914 and until 1919.

It is directly adjacent the border and the nearest Prussian town with a railway station would be Prostken/Prostki.

Since 1873 Grajewo had a train station and thus a direct railway link, at first connecting Brest and Königsberg/Królewiec). Königsberg seems to have meant a significant detour for the given destination — without much to gain in terms of speed, time or preferential connections. Similar results for Białystok, Łomża or Ostrołęka: all significant detours.

The border train station in Prostken-Saltzwedell was built in 1871 and connected also since 1873 Prostken to Grajewo in normal and Russian broad gauge rails.

Thus, starting in Grajewo itself means one border crossing. Starting in Prostken or after riding through Prostken then means no further control stations.

From there, the options multiply quickly: 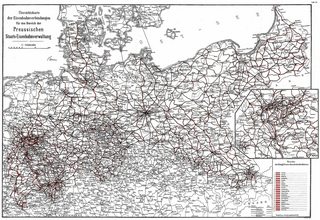 The route from Lyck/Ełk to Allenstein/Olsztyn had 6 connections per day in 1914:

Then perhaps Thorn, Posen or Schneidemühl, Frankfurt/Oder, Berlin to Stendal.

Most famously, emigrants then usually took the so called America-line which connected Berlin and Stendal with Bremen and Bremerhaven:

The time for such a journey depends on the actual route taken. Which was then as is now also a matter of pricing. Faster trains would cost more. For the year 1917 it is of course much more difficult to firmly reconstruct any route or time that took, as war time priorities on the railways was not civilian passengers…

The actual timetables are largely online. Like Hendschels Telegraph 1914. If we piece together the connecting trains for the larger stations and prefer faster and longer reaching trains.

Meaning one should have tried to get from Grajewo to Allenstein, then switch trains once more in Berlin.

If another destination, like Rotterdam, is the go-to port, then TimeTableWorld is currently the place to look it up. Crossing the German-Netherlands border in 1917 should have been possible in general, however strictly the Dutch tried to control the movements. At least in mid-1915 that was evidently a possibility.

Interestingly, people stating their place of (former) residence as Grajewo and emigrating with Bremen-registered ships are quite few in numbers as currently still listed. From the surviving records, none left from Bremen in 1911, and rather obviously emigration from German ports came to halt in late 1914.

Just for comparison, a modern connection from Grajewo to Rotterdam looks quite similar, and appears to be not any faster whatsoever: