I found this article from the Atlantic that addresses this topic and gives the recent events in Egypt as an example of a successful non-violent movement. There are similar examples going on currently in other Middle Eastern countries, as well as examples of some that turned to violence, such as Libya.

There is also a web site for an organization called the International Center of Nonviolent Conflict which is documenting current and past examples as well. They have a page of summaries with links to additional information for each of the events they chronicle.

Personally, using the very examples you provided, I believe that a lot of the violent movements actually stem from people who are impatient with the non-violent efforts to obtain a goal. When these outliers decide to speed up the process by taking matters into their own hands and escalating, they might inadvertently impact the willingness of others to negotiate with the non-violent faction. However, I don't believe that the ultimate success of people like Gandhi was dependent on violent actions by others. Patience and persistence would most likely have accomplished the same end results, but some were simply not willing to wait.

The revolutions that brought down the Soviet Union were largely non-violent.

In general, I would say it depends. If the violent part is strong enough to cause a significant problem (very uncommon), then it can help force negotiations with the non-violent side.

If it is not very strong, then I doubt it has any significant positive effect. It can even be a hindrance as it may turn moderates somewhat sympathetic to the movement away from it.

In direct answer to your question, the Orange Revolution in Ukraine comes to mind as another example of a nonviolent protest that was very successful without a violent analog.

This is definitely interpreting 'what does the history say about this' a bit broadly, but it seemed like some notes on the nature of violent protest movements might be in order. There is an important difference between a pro-violence movement and a movement that hasn't specifically ruled violence out.

Non-violent protest as a means of creating societal change has its roots in Satyagraha--very loosely the idea that a person/group can, through a show of moral goodness and purity in the face of tremendous abuse, bring their attacker under their moral sway.

I'm making this differentiation because I would argue that the 'violent' end of a given protest movement is usually not so much pro-violence as it is skeptical that Satyagraha is the most effective, practical means of change. Many 'violent' protest movements were focused on various public policy programs, grassroots organizing strategies, or economic agendas as the most effective path towards their determined goal, rather than appealing to their antagonists' moral sensibilities. There are certainly examples of the phenomenon not mentioned in your question--'violent' movements that achieved some of their goals without using violence to do so.

I think that's pretty clearly nonsense. What were the "parallel violent movements" in the People Power Revolution (1986, Philippines), or most of the Eastern European revolutions of 1989 (such as rather aptly named "Peaceful Revolution" in East Germany and the "Velvet Revolution" in Czechoslovakia), or the overthrow of Slobodan Milosevic in 2000, or the 2003 Rose Revolution in Georgia, or the Arab Spring in Tunisia? (For that matter, how was Malcolm X actually "violent"?)

On the general question of whether violent resistance is effective, you might want to take a look at the well-regarded study by Maria Stephan and Erica Chenowith on the relative success rates of nonviolent and violent resistance campaigns. You can find the original 2008 study here; it was later expanded into a book in 2011 called Why Civil Resistance Works: The Strategic Logic of Nonviolent Conflict.

One of their main arguments is that violent campaigns are less likely to get popular support (or international support) and are easier for regimes to suppress without much protest. Put more simply: if your movement is violent, you're less likely to get the general public or international groups to support you, and it's easier for the regime to portray you as illegitimate and too dangerous to talk to, and easier for them to justify and get away with suppressing you. One implication of this is that if the regime can link (legitimately or just via propaganda) a nonviolent movement to a violent group, it can poison the nonviolent movement in the eyes of the general public, making it less likely for them to succeed. (This is in part echoing Opt's answer.)

There is a pretty recent quantitative study by Elizabeth Tompkins (2015), but like all such studies of non-violence, it's heavily biased toward recent history. Here's the title & abstract:

A Quantitative Reevaluation of Radical Flank Effects within Nonviolent Campaigns

Though the coexistence of nonviolent and violent groups within a single movement is a common phenomenon in maximalist campaigns (e.g., regime change, anti-occupation), the effects of this coexistence remain understudied. Focusing on primarily nonviolent movements with a simultaneous “radical flank” pursuing the same goals, this study builds on previous, inconclusive literature which narrowly accounts for limited and often case-specific radical flank effects. After conducting a series of large-N regression analyses using a subset of the NAVCO 2.0 dataset, this study finds that the presence of a radical flank (1) increases both the likelihood and degree of repression by the state and (2) is most significantly linked with decreased mobilization post-repression – yet, (3) is not necessarily detrimental to overall campaign progress.

And just before anyone asks WTF is in that NAVCO, the paper obliges us with a (hopefully representative) sample: 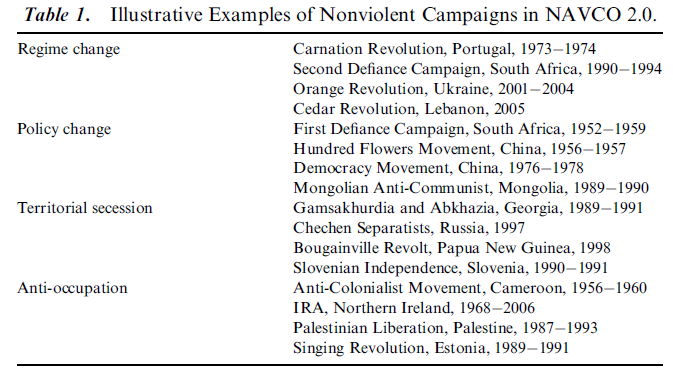 And interestly, the conclusion of the paper contains an extra, less sheepish sentence, unlike the abstract:

In fact, this study actually finds evidence that the presence of a radical flank is modestly associated with increased campaign progress per annum.

And here's the actual regression on which that conclusion is based: 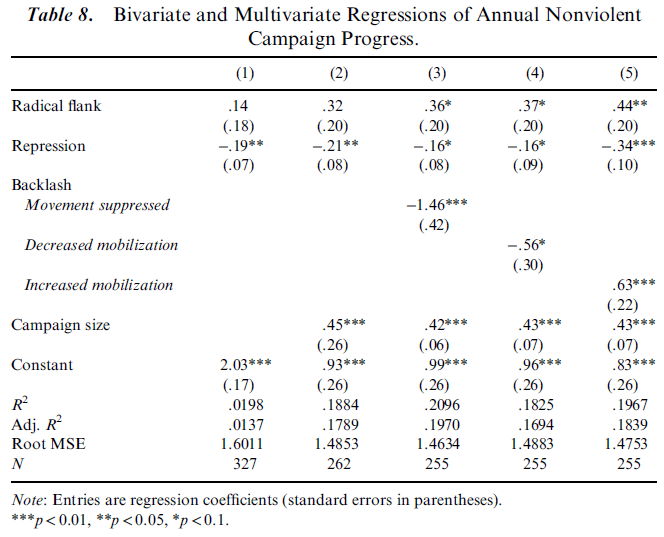 There are no multiple-test corrections so inferring from the weak statistical significance of the effect (of radical flank on progress) is fairly problematic. I can see why the abstract didn't have this extra sentence / conclusion.

Not the answer you're looking for? Browse other questions tagged revolution world or ask your own question.

18
What was the first successful non violent independence movement?
17
What is the historical reason for 18 years being the most commonly accepted age of adulthood?
9
Has there ever been a situation where the "motherland" treated its colonies well anywhere in the world?
3
What was the first recorded non-violent toppling of a dictator?
10
What was the primary motivation for a historical figure like Xenophon to create an extensive collection of written material?