What is this 17th century Swiss coin?

I am trying to find more information about a coin that my father gave me before passing.

All I know is that the coin is supposedly from the 17th century, Bern, Switzerland.

I have found similar coins, with the bear on one side and a cross on the other.

However, I cannot seem to find any coin that has the same patterns (in particular in the quadrants between the spokes of the cross) or a bear that looks the same. I am also unable to make out the writing.

I am afraid of taking it out of its container, so I cannot measure its mass. Its diameter is about 19.7 mm (as measured through the plastic, so add a bit of error there…). 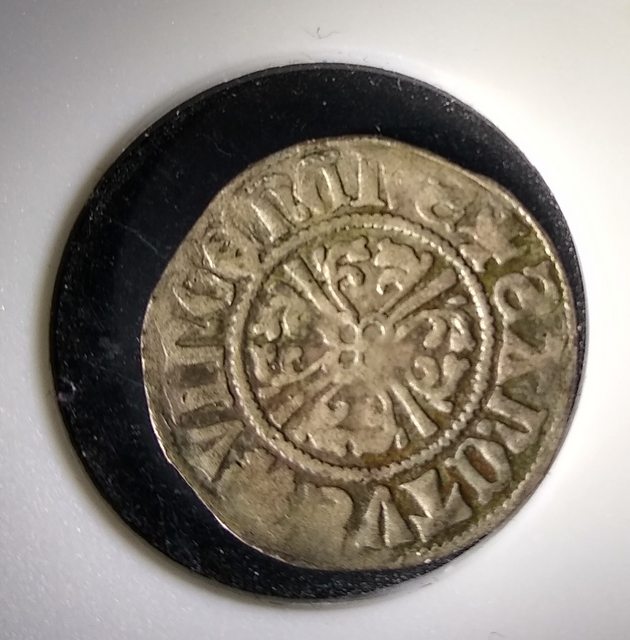 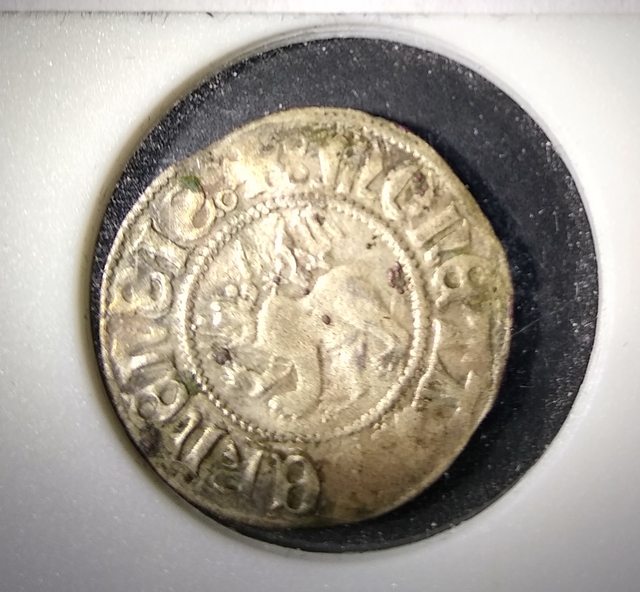 The inscriptions are (note that the S's are backwards):

(The style of lettering can be compared, with, for example, a 14th-century brooch shown here on page 2, also with reversed S's and closed-up E's; with a 1497 inscription showing A's with the same kind of top horizontal bar (though there it also has the interior one); etc. No doubt someone with greater expertise in medieval paleography could find better examples.)

It looks fairly similar to a coin shown at http://www.beastcoins.com/Topical/Bears/Switzerland/Bears-Switzerland.htm, under "Canton of Bern - 1400's." The size there about matches what you measured, and the description there says that it was a 5 Heller coin, and that its type is described in HMZ 167. (HMZ-Katalog, published in 1977 and reissued in 2006, is a standard reference for coins from Switzerland and Liechtenstein since the 1500s.)

I don't have the HMZ-Katalog, but this auction listing has the type as minted between 1492 and 1528.

In comments, LangLangC has found another listing that gives instead HMZ 166a and dates it still earlier, to 1400-1425. Someone with access to that catalog would have to take a look, then, and see which one this coin more closely resembles.

At any rate, it's quite a bit older than your father thought it was!

Not the answer you're looking for? Browse other questions tagged identification 17th-century numismatics switzerland or ask your own question.

14
What is the flag in this 17th century painting?
7
Can someone identify this coin? ΤΙΓΡΑΝΟ(Υ) (Β)ΑΣΙΛΕΩ(Σ)
1
What coin/token is this? Copper “1 1900” Rev: Austro-Hungarian arms
13
What is the origin of this coin? Willem WRL
2
What's this antique coin?
1
Can anyone help me identify this old coin?