What was the device that general Birdwood was using in the “Gallipoli” TV series?

Since this is a question about historical detail, I think it suits more this site than Movies SE.

The miniseries Gallipoli tells the story of the invasion on that peninsula during the Great War. I think the movie tries to be quite historically accurate, hence I am baffled about this device. 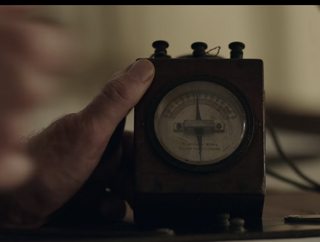 General Birdwood, the commander of the ANZAC troops is given this device just before the planned offensive with information that "when the needle will start moving, it means that the men have landed in the Suvla Bay", for which most of the general staff reacts with curiosity.

Initially, I thought that this is some sort of a telegraph, but by 1915 those devices were already highly advanced and well-known. Marconi's radio was mass produced since 1912, but this device has no speaker (or headphones), only a needle.

What is this device? How can it be used in communication?

It's technically a galvanometer. Available then in principle for quite some time.

They were the first instruments used to detect and measure small amounts of current.

It was used before and during the war as metal and gun detector, and perhaps even as a very sensitive seismometer.

If you want to get one you may find it under "Vintage Military Detector": 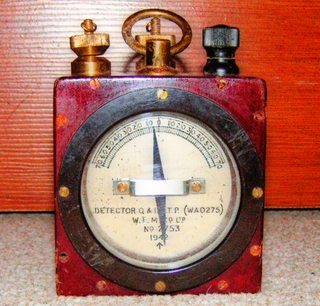 Another listing decribes such a device as:

Edison and Swan "Q and I detector," – This British Q and I detector is an elementary galvanometer made for telegraph, telephone and other types of electrical maintenance workers to make rough battery checks, find faults, number wires, and other similar tests. It is not intended to measure absolute current or to be part of a working telegraph set. The "Q and I" stand for "Quantity and Intensity," 19th century electrical terms, which are misleading terms to describe the coils. The "Q" coil has a resistance of .2 ohms. The "I" coil has a resistance of 100 ohms. The "intensity" coil is used for localizing faults in lines using a series resistance. The "quantity" coil is used primarily for battery testing.

The uses for that were apparently quite widespread:

Edison and Swan Q and I detector

The company Edison and Swan was a joint venture company formed in 1883 between the American inventor Thomas Edison and the British inventor Joseph Swan. Both had clashed over the invention of the electric light bulb in 1878.
This instrument was apparently used by telegraph linesmen for checking batteries, finding faults, and identifying and numbering wires. It comprises two coils, the Quantity (Q) coil rated at 0.2 ohms and the Intensity (I) coil rated at 160 ohms.
The Q coil is used for testing batteries and the I coil for localising faults.
A current of 140 mA in the Q coil should produce a needle deflection of 30 degrees and 10 mA through the I coil should cause a deflection of 50 degrees.

This instrument carries the markings “Edison and Swan, No. 22386” is dated 1918 and comes with a leather carrying case.

These could be used as follows:

Clark placed in a building a large air coil electromagnet connected to a galvanometer relay. He claimed that when persons came near to or walked away from the coil, the needle of the galvanometer would be deflected.

In his patent application, Clark stated,

So it is a device that comes from the field of electricity and was indeed widely used in telegraphy. The early patent granted for a military application of it leads me to not being able to answer the subquestion: How that device lead to astonishment by the other soldiers present?

As Andrew's answer notes, the actual monitoring of the landing progress apparently was not done with 'advanced technology'. That leads to the assumption that this slightly vague detail in the TV series is not entirely historically accurate to begin with. Which leaves us with a lot of speculation over how such a galvanometer could be used for such a task, of which there a quite a few possibilities imaginable (some found in the recommendable other answers on this page). And further speculation as to why the writers included the device.

For the latter, a working theory might revolve around Lawrence Bragg, an Australian, who won in 1915 a Nobel Prize and in the same year developed the technology of sound ranging (SR) for artillery fire that involved a string galvanometer, shortly after his brother was killed at Gallipoli.

All these points towards a connection with the theme of the show. However, as was correctly noted in comments already, the actual real SR technique was not suitable at all for the conditions found at the landing. A setup from the time looked more like this: 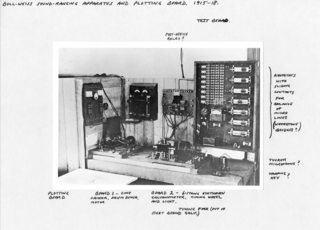 More on Bragg and SR:

Altogether this makes it quite in my eyes quite plausible that the writers connected quite a few dots and conflated the info on 'Australians, new invention, galvanometer' into this little device as 'newest tech' without much needed and/or detailed explanation on screen?

Assuming that it is indeed a galvanometer, as LаngLаngС suggests (and I think they're right), then my suspicion is that it is indicating something to do with the telegraph signalling system from the landings.

There is a detailed appendix in the war diary of the GHQ Director of Signals (WO 95/4268, Ancestry). This sets out the signals work at Suvla; a party was sent ashore in the night at Nibrunesi Point, overlooking Suvla Bay, to bring ashore a cable. The idea was that they would then be able to relay signals between the landing divisions, the ships, and headquarters until those units could also be connected to the telegraph system.

Very few messages came through during the day - until 0848 nothing was recieved except SGs, and till then GHQ was kept informed of progress of landing by information from Signals.

I strongly suspect, but with the caveat that it's speculative, that this initial connection is the event that is being dramatised. The first confirmation that anyone is ashore comes from that telegraph line being connected, and presumably you would be able to easily hook another indicator into the line so that it will start flickering when there is a live circuit. That line runs through a headquarters where Birdwood is based, even though it's not formally reporting to him (he wasn't in command of the force landing at Suvla).

So my guess is that it is a galvanometer being used as a galvanometer, to indicate the telegraph line is live and thus that the shore signal station is now active.

Whether this actually happened, or if it was dramatised... I don't know. It seems a bit of an odd thing to make up, but equally it could have been an incident from elsewhere in the war that was added here for dramatic effect. I can't find any mention of it elsewhere. The Australian official history doesn't go into much detail about the landings, but on the afternoon of 7th August it notes:

Of the progress of the force disembarked at Suvla Birdwood had no information except that which his eyes afforded him. (p 646)

The official history doesn't seem to mention any specific notification of the landings overnight, and it is not in Birdwood's memoirs. I have not been able to track down anything from other eye-witnesses. Ian Hamilton (to whom the signals were all ultimately going) noted an "All landings successful" cable in the early morning and since then 'no direct news'. (memoirs, vol 2, p. 56).

One possible explanation is the use of "sound ranging".

During World War I, a team of scientists developed a technique called sound ranging which worked using a system of microphones and a device called a string galvanometer.

The purpose of the equipment was to determine where enemy guns were positioned by analysing the length of time it took sound impulses from the firing of guns to arrive at the allied front.

The equipment would have had six "microphones", the signals from which were recorded simultaneously on the film recorder.

Another, possibly more applicable to masses of troops disembarking from ships and exposing more of the ships' hulls as the ships got lighter, at the start of the Suvla Bay campaign and thus creating a larger disturbance in that location of the Earth's magnetic field.

"As a matter of actual personal experience," said Dr. Tesla. "it became a fact that the small iron-hull steam mail-packets (ships) plying up and down the river Seine at a distance of 3 miles would distinctly affect the galvanometer!"

... this magnetic method of locating or indicating the presence of an iron or steel mass might prove very practical ...

The device in the picture looks like a signals galvanometer. Such devices were used to monitor signals traffic, by measuring changes in the localized magnetic field produced by spark Morse code transmitters, that would have increased as the campaign commenced.

Not the answer you're looking for? Browse other questions tagged world-war-one technology or ask your own question.

7
What was the output of a Bessemer Converter?
11
What was the other 99% that PARC didn't show to Apple?
4
In general, what was the level of technology like in central Africa, just before the scramble for Africa?
10
What was Wilhelm II's “book about the causes of the war”?
23
What was the “Favorable result” that the German admiralty was expecting from the naval attack on the Royal Navy in 1918?