Were there German bomb disposal units in WW2?

There is lots of information about British bomb disposal units in Britain during WW2. Britain dropped a lot of bombs in Germany. Many of them didn't explode - they're still digging them up now.

Were the British bombs equally deviously booby trapped or have equally unreliable detonators? Did the Germans have a knowledge base on how to defuse British bombs?

A Bombenräumkommando would be one such unit. These were the ones tasked with disposal. A Bombensuchkommando was used for merely locating the bombs. Also in use was the term Sprengkommando (~'Detonation Command', translated as 'bomb disposal squad') Proper defusing and controlled explosions in situ were at first seen as really for specialists. Strictly speaking. In practice, both tasks were quite often intermixed as the demand grew ever higher.

There is a slight but principle distinction to be observed between frontline and hinterland or homeland deployment.

The mass of the most dangerous parts of the jobs in the bombed cities in later years were usually delegated to prisoners, concentration camp inmates. Killing them with this kind of work as 'failed defusing' was knowingly accepted.

Whether voluntary specialists or forced labour: those had quite a job, quantitatively. 135.000–270.000 tons of unexploded bombs were to be secured, defused etc. It is estimated that of those duds around 100.000 tons are still waiting to be discovered and dealt with.(src)

These dangerous jobs were often hierarchically compartmentalized in their structure:

The area of operation of the Kalkum bomb disposal unit extended far into the Ruhr area. This command was housed on a site near the Kalkum railway station, south of Kalkumer Schlossallee. Stationed in Kalkum from 1940, the unit comprised 20 specially trained Luftwaffe soldiers. From 1942, prison inmates were added, and from May 1943, concentration camp inmates. While the prisoners had to search for and recover the bombs, the fireworkers were responsible for defusing the duds. As long as the prisoners were assigned to the bomb disposal unit, they were under the guard of air force soldiers and had a certain privileged situation. In Kalkum, this was also due in a special way to the commanding officer, Captain Heinz Schweizer.

The Kalkum commando, Captain Schweizer, was one of the leading specialists on the Wehrmacht side in the analysis of the new types and the development of defusing strategies and tools. The former soldier of the 'Legion Condor' made a career as a bomb defuser during the Second World War. Nazi propaganda stylised him as the 'man with the nerves of steel'. Various bomb disposal techniques developed by Schweizer are still used today in explosive ordnance disposal.

One of those 'units' 'at work' in Hamburg: 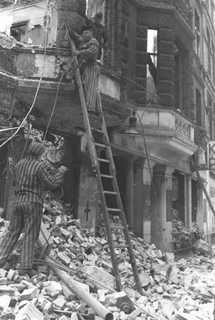 Prisoners of the Neuengamme concentration camp preparing for the demolition of a ruined building at Gerhofstraße in Hamburg-Neustadt, October 24, 1944 Even after the 2nd SS Construction Brigade had been withdrawn, prisoners of the Neuengamme concentration camp were still forced to look for unexploded bombs and demolish buildings at risk of collapse.

Prisoners of the Neuengamme concentration camp in wartime Hamburg 1943-45

The City of Hamburg played a crucial part in the establishment of the Neuengamme concentration camp. After the heavy Allied air raids in the summer of 1943, hundreds of concentration camp prisoners were forced to retrieve dead bodies and clear rubble in the city.

Institutions and companies asked the SS to supply them with more and more prisoners for the construction of temporary housing, production of building material and weapons as well as shipyard work. From 1944, 15 Neuengamme satellite camps emerged in the city. The inhabitants of Hamburg encountered concentration camp prisoners every day in the street, on their way to work and at work.

— "A City and Its Concentration Camp"

Within the Wehrmacht Feuerwerker specialists were deployed in all kinds of ranks and roles. The designation was a Fraktur-F on the sleeves: 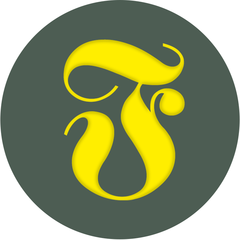 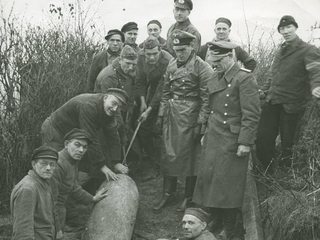 The development for clearing up in cities or near important installations within the Reich in a more systematic view:

--> During the war, all explosive ordnance disposal after air raids on German cities were assigned to the Luftschutzdienststellen (~Air Raid Warfare Services), subordinate to the Reich Minister of Aviation.

In 1939, only a few unexploded bombs were to be dealt with within the territory of the Reich. Therefore, the Safety and Assistance Service (Sicherheits- und Hilfsdienst, SHD) was deployed very orderly to uncover the duds and a fireworker from the nearest military unit was then deployed to defuse the duds.

In principle the Reich territory was divided into the so-called Luftgaue I to XVII. The territory of a Luftgau command was divided into "blasting districts" (literally: Sprengbezirke), each with at least one permanent detonation detachment (Sprengkommando).

After detecting unexploded ordnance, a period of 24 hours had to be waited before defusing in order to avoid additional danger to the Sprengkommandos due to the danger of slow fuse detonators (Langzeitzünder, LZZ). Although this saftey regulation was waived for facilities important to the war effort, such as armament factories and railway installations.

Despite all those precautionary measures, accidents repeatedly occurred during the removal of unexploded bombs. So they 'used' prisoners from concentration camps were trained to defuse bombs under guard.

The most highly decorated fireworker was Egon August Aghta who can be seen in the last ever propaganda newsreel 'Deutsche Wochenschau' No 755 of March 22 1945 (archive.org), shown there shortly with his Sprengkommando team, in a briefing and in his hands-on job, starting to defuse a bomb.
He had a nearly fatal accident already in 1942 while working on a dud, but was ultimately killed on May 2 '45 by ordinary bullets when trying to persuade 'per gun' Soviet troops to not enter Berlin.

An extract from my mother's memoirs from 1941, when she was aged 17 and her brother Ditmar was 15; they lived in Kleefeld, a suburb of Hannover:

There were several nights when Ditmar and I helped successfully to save beautiful houses in Kleefeld which are still standing. On one such occasion the father of one of the girls in my class, a retired brigadier, co-ordinated our efforts against phosphor bombs blazing in his loft space. A typical old soldier, he was nearest to the fire and eventually died from phosphor burns. Ditmar showed such exceptional courage that he was awarded his first medal before he was old enough to wear uniform. Wölfi Grafe, one of Ditmar's closest friends, had his house in Kleefeld destroyed completely. His father was killed and his mother was admitted to a mental hospital as a result of the shock. Wölfi came to live with us.

Clearly, dealing with bombs also fell to the civilian population.

Defusing of unexploded bombs in WWII Germany was mainly done by Luftwaffe "Feuerwerker" technical staff. The Luftwaffe was responsible for everything involved with aviation, so their technical experts on ammunition and explosives got this job.

There doesn't seem to be much information on the web in English about bomb disposal in Germany during and after WWII. I found out a bit from the Wikipedia page on Heinz Schweizer, a Luftwaffe Hauptmann and Feuerwerker who is notable for the examination of an "Upkeep" bouncing bomb from a British plane that was shot down during the Dambusters raid, and for rescuing some political prisoners from the SS near the end of WWII.

Not the answer you're looking for? Browse other questions tagged world-war-two germany bombing or ask your own question.

50
Why were there no Internment camps for German-American Citizens in USA during WW2?
27
Were any German cities spared by the Allies for personal or idiosyncratic reasons?
11
What effect did awareness of devastating bombing at home have on the fighting spirit of German troops on the Eastern front?
5
How Effective Were German SS Units Compared to Non-SS Heer Units?
4
Is there a complete list of German cities bombed by the Allies in WWII?
6
Were there any gunner aces of WW2?
3
WW2 - Translate German text
7
Is there a WW2 European bomb damage atlas?
1
Why were some German and Japanese cities bombed more than others during WW2? Is there a scientific consensus?