An offshoot of this question.

I am developing a software product. Very briefly, given a floor plan, it lets the user edit it, and add information to each "room".

Think of a shopping mall, where it will display the floor plan and have a list of shops, alphabetically or by category; search for one & it is highlighted on the map. Click any room on the map & get information — maybe opening hours, restaurant menu, etc.

I wonder if there is any good classical Roman floor plan that I could use as a demo? Temple of the Vestals? Imperial palace?

For the House of the Vestals: 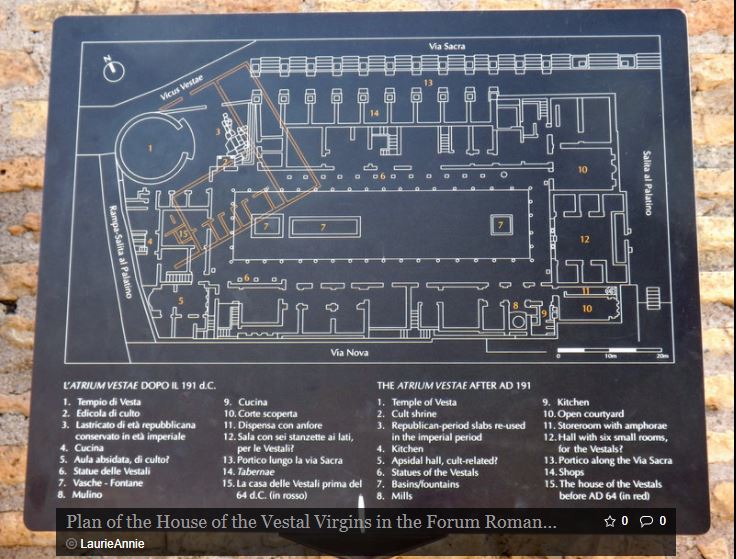 Source: LaurieAnnie, 'Plan of the House of the Vestal Virgins in the Forum Romanum'

Below is a floor plan of the 2nd century BC House of the Faun, a luxurious private residence in Pompeii. 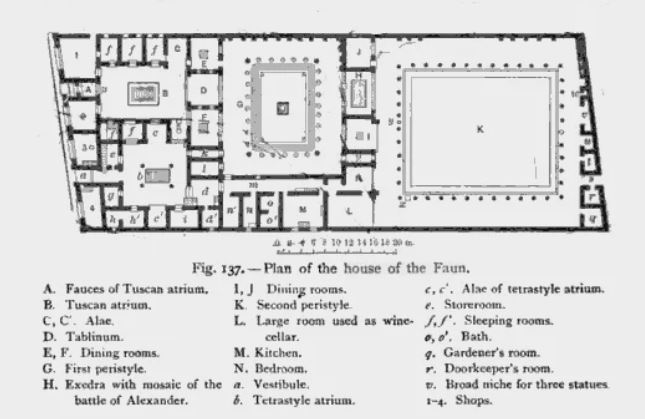 Source: 'House of the Faun at Pompeii - Pompeii's Richest Residence'

Unsurprisingly, Pompeii is a good place to look if you want details on Roman houses, and there is another example here of an aristocratic house, the House of Pansa. This belonged to the politician Alleius Nigidius Maius. 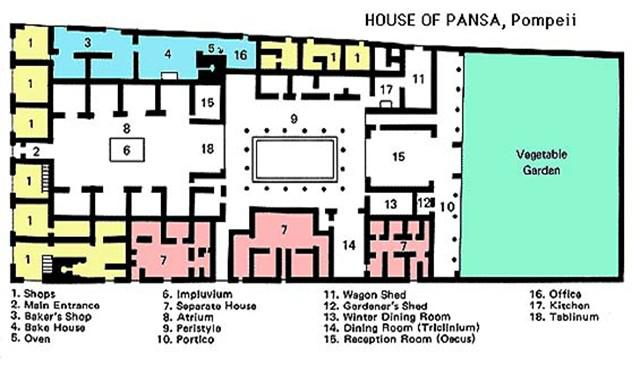 Fishbourne Roman Palace near Chichester in West Sussex, England, has been thoroughly excavated and very detailed descriptions of the rooms (with floor plans) can be seen in Fishbourne: a Roman palace and its garden by Barry W. Cunliffe. This book can be borrowed for one hour on the Internet Archive (click on the link above).

Floor plan for the West Wing (there are also North, South and East Wings). The key to the numbers (W2, W3, etc.) is in the accompanying text where there are detailed descriptions of each room. Source

You might also want to research the Domus Aurea, or Nero's Golden House. The article Charles Cameron and Nero's Domus Aurea: 'Una piccola esplorazione' has several floor plans but unfortunately the key to the rooms is not given. However, it may be in the original source, Laura Fabbrini's 'Domus Aurea' (1983). Also worth looking at is Larry F. Ball's The Domus Aurea and the Roman Architectural Revolution (2003). It goes into great detail, as can be seen from the copy of the contents and first chapter available here.

Another major Roman residence outside of mainland Italy is Diocletian's Palace in in Split, Croatia. There is a floor plan / map here, but it may lack the kind of details you are looking for.

Two other sources perhaps worth looking at (and which have the advantage of being available for free on the Internet Archive) are 'Roman Architecture' by Frank Sear and Roman Art and Architecture by Mortimer Wheeler. The former has quite a number of floor plans, though not with the detailed labelling you are perhaps looking for. The latter has floor plans of the Stabian Baths at Pompeii and Hadrian's Baths at Lepcis Magna.

Not the answer you're looking for? Browse other questions tagged roman-empire roman-republic architecture or ask your own question.

13
When did European building interiors partitioned into rooms become commonplace?
2
Was Caligula popular with the general Roman population?
1
How did production of grain change with Hellenistic Egypt coming under Roman rule?