What's going on with this graph of wheat prices in "Civilization and Capitalism"?

I've been reading through Fernand Braudel's Civilization and Capitalism, 15th-18th Century Vol I: The Structures of Everyday Life. On page 135, there's a graph of the price of a quintal of wheat in terms of hours of manual labor. I have uploaded a picture of this graph below as it appears in my copy: 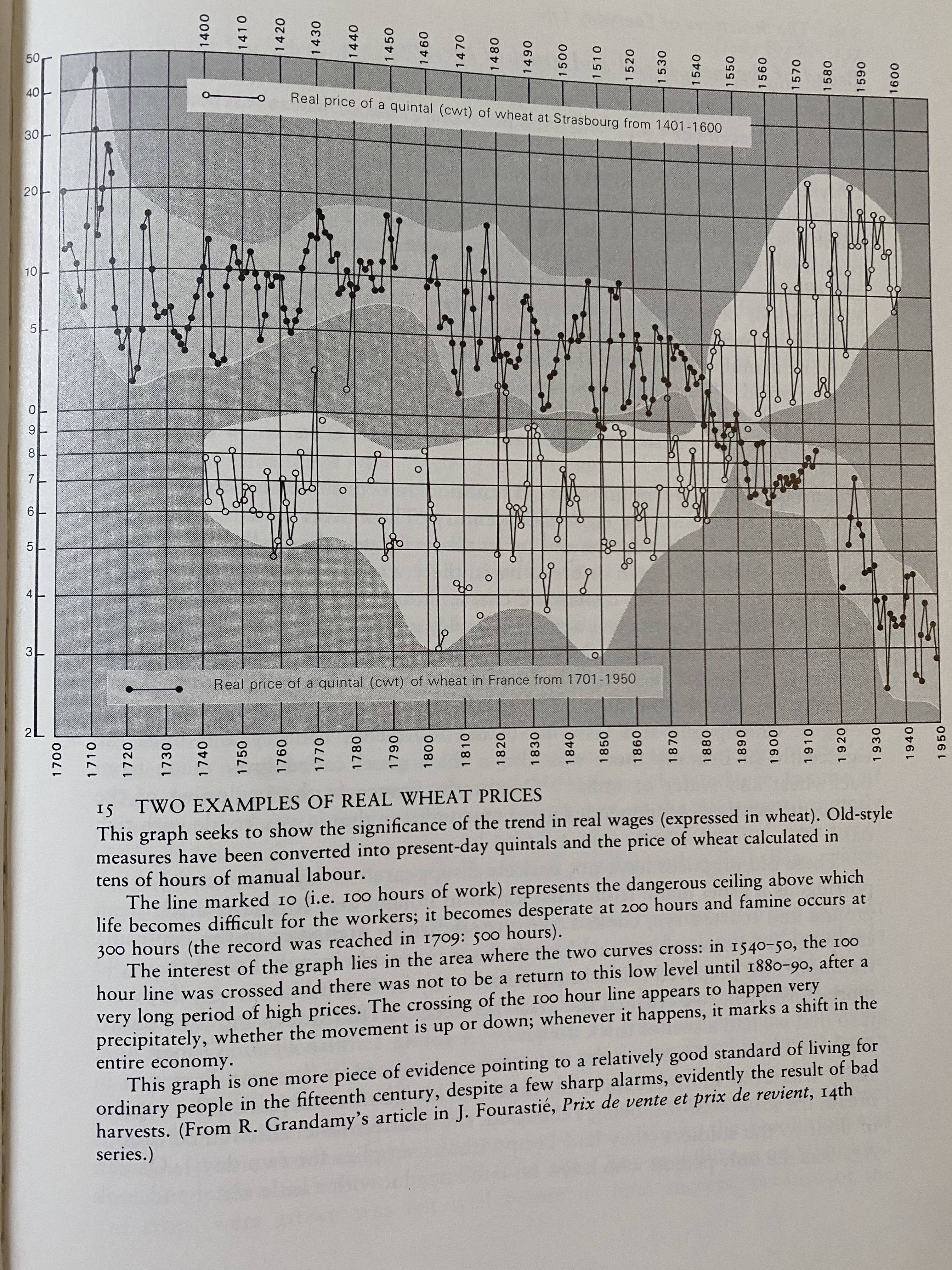 I think I understand the unorthodox layout of the chart (the two superimposed series of dots do not actually overlap in time; the light-colored region is dated according to the x labels on the top edge of the graph), but the labels on the y-axis confuse me. The description provides some elaboration as follows (bolding mine):

This graph seeks to show the significance of the trend in real wages (expressed in wheat). Old-style measures have been converted into present-day quintals and the price of wheat calculated in tens of hours of manual labour.

The line marked 10 (i.e. 100 hours of work) represents the dangerous ceiling above which life becomes difficult for the workers; it becomes desperate at 200 hours and famine occurs at 300 hours (the record was reached in 1709: 500 hours). The interest of the graph lies in the area where the two curves cross: in 1540-50, the 100 hour line was crossed and there was not to be a return to this low level until 1880-90, after a very long period of high prices. The crossing of the 100 hour line appears to happen very precipitately, whether the movement is up or down; whenever it happens, it marks a shift in the entire economy.

But this interpretation seems to me to be at odds with the labels further up on the y-axis; what do the 5, 10, 20, 30, 40, and 50 marks indicate? If they represent tens of hours as before, then the 100-hour mark shows up twice on this graph, and the situation is even more absurd if we interpret them to be in units of individual hours. Certainly the remark that prices reached 500 hours in 1709 would suggest that they should be read as tens of hours.

We could perhaps suppose that the markers on the lower half of the graph are to be interpreted as individual hours, and only on the top half are they denominated in tens of hours - but then the 100-hour mark does not comport with the description of when this line was crossed. (One could suppose that the 100 in the description is a typo, and it is the 10-hour mark which is the "dangerous ceiling", but this seems in contradiction with common sense - if 10 hours of manual labor can purchase 100kg of wheat, one should be in no danger of starvation.)

I can't seem to find a sensible interpretation of this graph any way that I look at it. If anyone can shed light on the proper reading here, point to errata in a future edition of the book, or perhaps consult a copy of the original French edition for more insight, I would greatly appreciate it.

(I have a few other questions about this graph, like why an open dot is connected to a closed dot around 1438/1778, or the significance of certain dots being unconnected to one another, but the units of the y-axis are my primary concern.)

This question was previously asked on the AskHistorians subreddit here, but did not receive any satisfactory answers.

Ah, I think I've figured out the error here - the key turns out to be the spacing of the horizontal lines. (I'll leave this question up, in case it serves to clarify things for any future readers who investigate this issue.)

As is apparent from the spacing of the lines, the y-axis is intended to be logarithmic. If we take the markers 2 though 9 to be accurate, then we can obtain consistent measurements for this scale: on my copy, I measure a factor of 2 (such as the distance between the 2 and 4 marks, or the 3 and 6, or the 5 and 0) to be around 2.2cm, and a factor of 3 to be around 3.5cm (as we should expect, the ratio between these lengths is very close to the quotient log(3)/log(2)).

If we then extrapolate these ratios above the 0 line, we find the following distances:

These measurements are all consistent with the following relabelings (maintaining units of tens of hours of manual labor):

If we make the above relabeling, everything makes sense: the scale is nicely logarithmic, the crossings occur at 100 hours, the peak occurs near 500 hours (in fact it goes slightly over the threshold, rather than slightly under as it appeared originally), etc. I would conjecture that the original graph was accurate, and in the process of typesetting, some labels were mistranscribed, or perhaps that the labels above the "0" line were meant to indicate the excess above 100 hours, and this change was not propagated to the original description.

Not the answer you're looking for? Browse other questions tagged economy france food or ask your own question.

16
How exactly were beer/bread made in Ancient Egypt?
5
Is it true that Nazi Germany replaced prices ending in .99 by round prices and called this "Aryan pricing"?