(Why) are there two different versions of the photograph of inmates at the Buchenwald concentration camp? 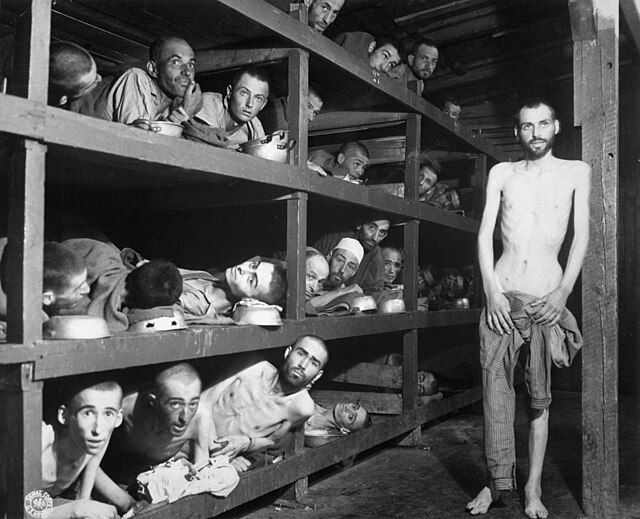 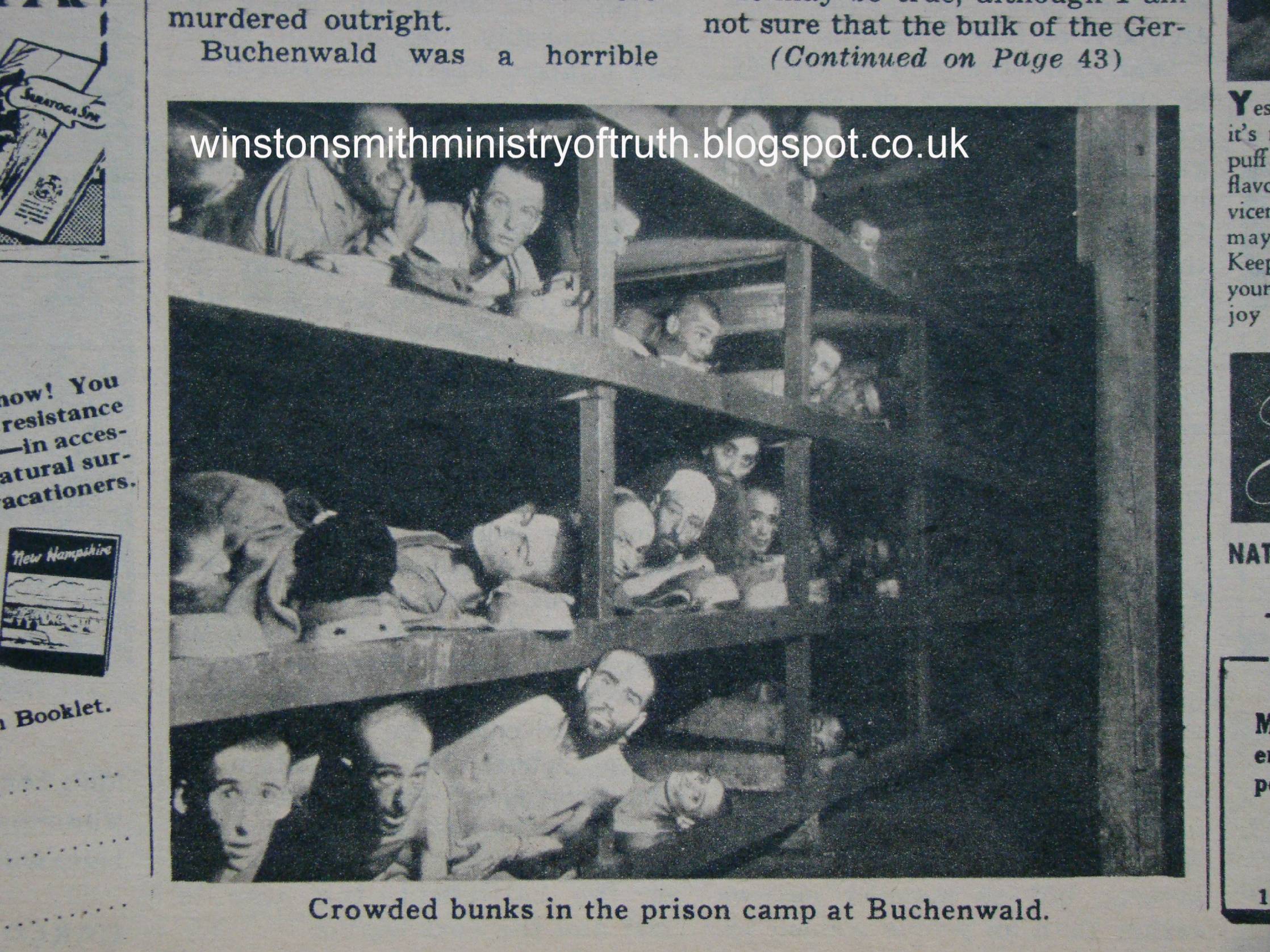 It is alleged that the picture on the 42nd page of the May 6th, 1945 issue of the New York Times Magazine, depicting inmates at the Buchenwald concentration camp, and taken five days after liberation, looks almost identical to the one above, except for the man to the right, in standing position, whose figure is supposedly absent. I would like to ascertain whether this is factually accurate, and, if so, to find out the actual explanation for the curious discrepancy between the photograph's two versions.

This is a photo used in conspiracy theories. The alternative version in higher resolution was indeed printed in the New York Times Magazine (NYTM) question as is, with the man, named Simon Toncman, and then published on a blog that claims "famous photo faked, therefore holocaust is hoax". This even reflected on the WP-Discussion page for the photo, where a Russian commentator placed the allegation:

The alleged problems with the version from WP/National Archives are indeed more numerous: the arm before the wooden pillar looks strange and shows some ghosting like the entire left half and more importantly the left ear as well, quite visibly: 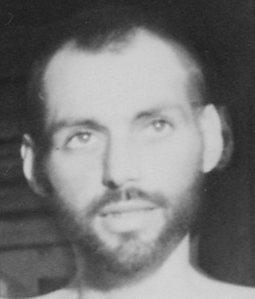 The NYTM version is usually only found on such sites.

The problem here: really all other persons are exactly in the position in both versions. No other movements, not even eyelids between shots. That makes it impossible that these are two takes of the same scene.

The photograph motif is inmates at KZ Buchenwald after liberation. The US army took a sub camp on April 4 and the main site on April 11. The photo was taken and indeed staged for effect after April 16. Apart from the National Archives, a detailed history is also available at Fotoarchiv Buchenwald.

The original caption for it reads:

These are slave laborers in the Buchenwald concentration camp near Jena, many had died from malnutrition when U.S. troops of the 80th Div. entered the camp. 16 April 1945.

It was taken by Harry Miller and shows 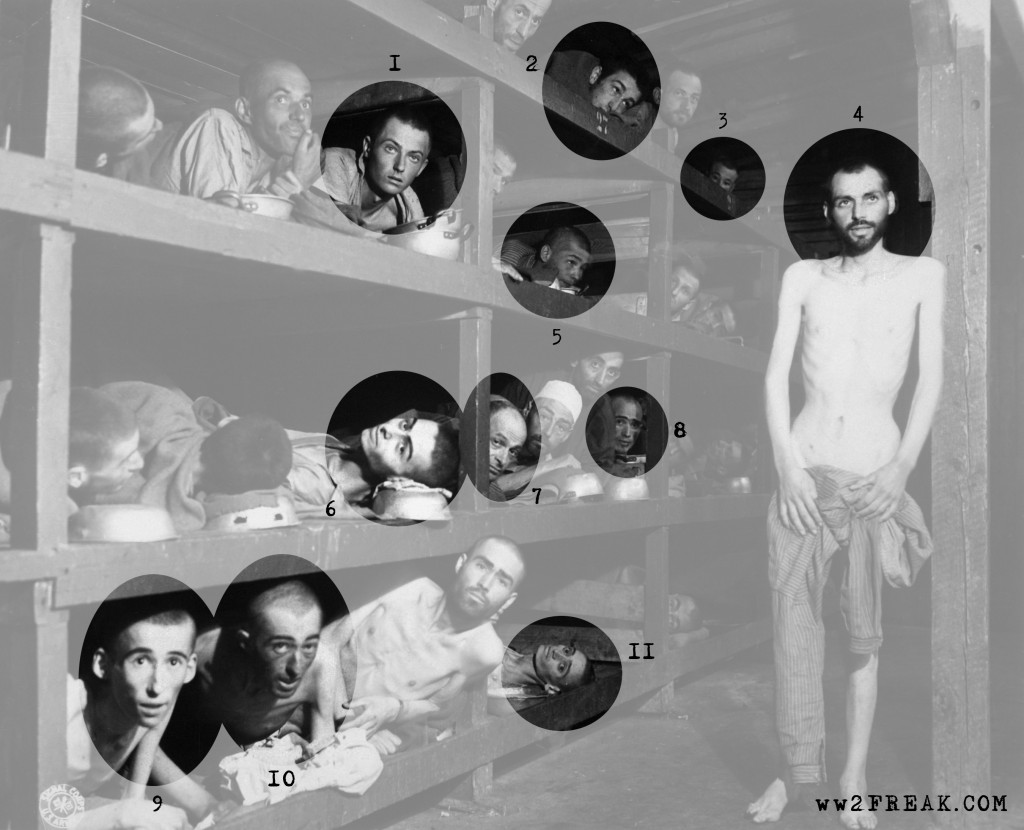 It was first published in American newspapers like The Star on April 28, 1945, and then on 29 April in several other publications. 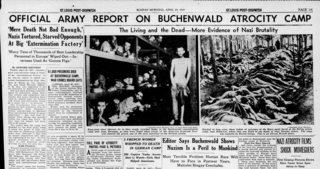 On the same day the New York Times publishes the same picture, but cropped. 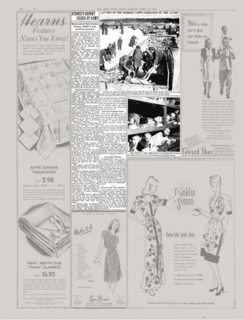 While on April 30 the Moberly Monitor-Index and Democrat has again the full width picture: 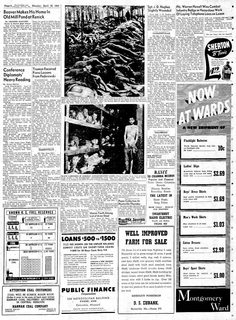 One big hint against the theory that the NYTM image was showing the supposed original is found in the version used on the cover of the 1979 edition of Mel Mermelstein's book "By Bread Alone" (remember from the list above that he was in that picture as well, now circled on the cover): 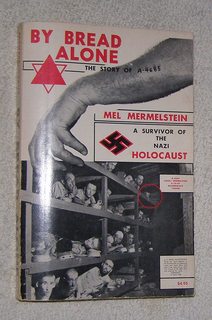 Indeed, Toncman is again missing. So at first glance Mermelstein's books used the supposed original? Look closer and see that this is also a retouched version, but differing from the NYTM picture. 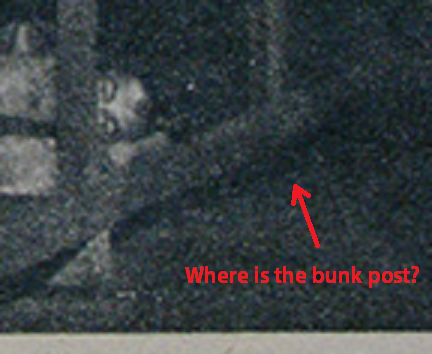 The wooden support below the bunks (to the right of the unnamed last man in the lowest tier) was kept/added in the cover version, it appears, but is surely entirely missing in NYTM. Further, the NYTM version seems to have a bulging shadow from the support beam behind Toncman and the dirt on the floor is more smoothed over in NYTM but more varied in the book cover version.

That means the supposed evidence for 'originality of NYTM — as 'evidenced by re-use on the cover — and fake official photo' is actually strongly against this theory.

The version of the picture with Toncman in it is the original and New York Times manipulated it twice. It cropped Toncman out of the picture the first time they ran the photo, and they retouched him out of it the second time a week later.

We see indeed a lot of more detail in the high resolution version from the National Archives. Like the shadow of Toncman, lining up indeed rather well with the rest of the lighting, and leaving even details in the texture of the dirt on the floor prominently visible. The strange arm and ear ghosting are motion blur, which is also visible on the inmate below "27" in height of the shoulders. 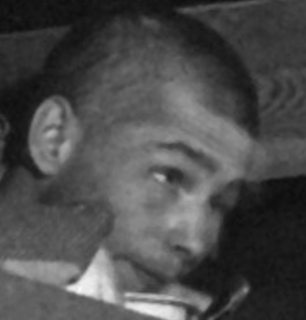 And replicated by Spanish writer Victor Baldovi on the subject: 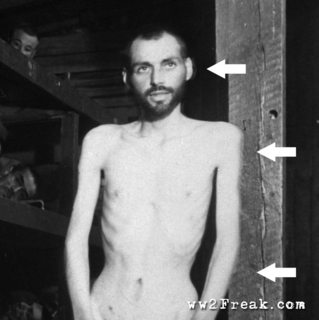 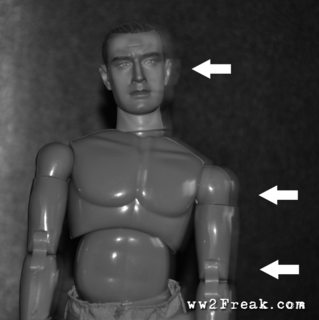 The most damning detail for the NYTM version is that the bunks were supposedly full, yet are empty in the back. While the original Signal Corps picture in the National Archive shows the astonishing small detail of yet another face visible directly below Toncman's right shoulder. 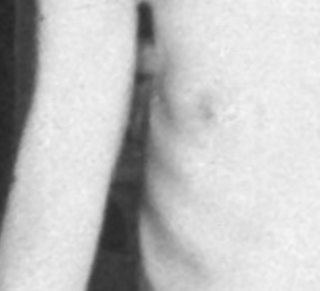 The retouched NYTM version smudges over the shadow and may invent some wooden beams for bunk lining, they forgot the support beam and couldn't insert people only fractionally visible in the original.

That means the New York Times manipulated the image twice: first by cropping out the portion with Toncman, then by retouching him out of the picture.
'The original' was published before and after in numerous other newspapers.

'Why' did the Times do that? Some speculative circumstantial hints may be found in the nature of the exact information the journalists at the very time had themselves, what exactly they wanted to tell, and what kind of policies and morals were prevailing at the New York Times, especially under the leadership of Arthur Hays Sulzberger.
Which internal policies or sentiments led the New York Times to this decision on picture manipulation despite seemingly many other papers just printing it 'as-is' remain unclear.
But it is noteworthy that for most Americans, including those actually visiting the camps very shortly after liberation, Dachau was often seen as the worst of the camps, despite quite some details for the liberated earlier Auschwitz/Oswiecim being known by then. 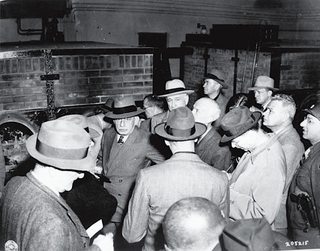 Times Vice President Julius Ochs Adler, facing the camera with dark hat, was among a group of editors and publishers who toured German concentration camps in April and May 1945. Adler is shown here near the crematorium at Buchenwald. (Source: United States Holocaust Memorial Museum)
[— Leff2005, p231]

Note also that by the time of liberation not many Jews over all were left to be photographed alive, also not in Buchenwald. But it happens that this picture shows a few of those Jews left, even evacuated from Auschwitz, then left at Buchenwald. And yet, even the original captions — or those used in other papers depicting the photo directly — makes no mention of that fact and just calls them "slave laborers".
This remains speculation.
If ever anybody comes up with recorded internal editorial minutiae of "retouche this picture, because I/we want/don't want…", then this will be much better than all this 'reasoning around' here.

But it is really noteworthy how the New York Times, at the time, treated the entire subject. Some details for that in:
— Laurel Leff: "Buried by the Times: The Holocaust and America's Most Important Newspaper", Cambridge University Press: Cambridge, New York, 2005. (review)

The above in short: As with any historical source, using the New York Times as a source for 'what happened' is confounded by the fact that this reveals primarily 'what the New York Times presented as happening'. That was in and around 1945 'suboptimal' in itself. And thus again a tiny little argument against: "see this is proof and must depict the real truth."

I decided to pay what was needed1 to get past the paywall, and can confirm that the man on the right is not in the image in the May 6th, 1945 New York Times Magazine article titled "The World Must Not Forget". Here's a screenshot of the image from the article: 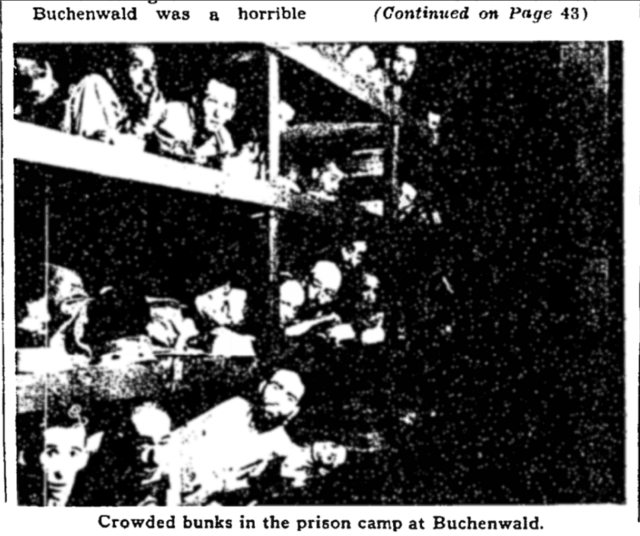 The photo was also published a week earlier, on April 29th, in the New York Times proper (as opposed to its magazine). That edition of the paper uses the same photo, but the man on the right and most of the top bunk is cropped out: 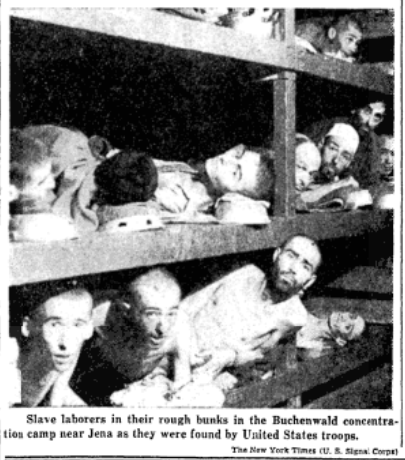 In the top right of first image you can see part of the beam the man is leaning against, so the man himself would be standing in that shaded area. As for why the area on the right is shaded in the magazine article or why it was cropped in the first article, I'm not sure if there's a definitive answer. The simplest answer could be that the NYT Magazine didn't want to publish an image with a nearly-naked emaciated man so prominently displayed, but I haven't been able to find any contemporary guidelines that the NYT had for the content of the photos that it published.

As for the quality differences, it's likely that the NYT Magazine didn't have the original image to publish, and was working with a low quality/edited copy. A few versions of the photo can be found here in the National Archives, and the creator is listed as the New York Office of the Office of War Information. This, along with the citation in the NYT that image comes from the US Signal Corps, suggest that first went through the OWI and they provided the NYT with a copy of it. From what I can see in other photos in the NYT Magazine, that wouldn't be unusual: other war-related photos seem similarly low quality, whereas non-war photos are of comparable quality to my second screenshot from the NYT itself2.

2. I'm unsure about fair use rules of paywalled images, so I won't screenshot any more than the one in question

Yes, there are two versions of the picture, one with Simon Toncman edited out. And the editing is easily detectable.

Why? The obvious conclusion is that it's because he's showing more crotch than someone considered appropriate. Odd how the obscenity of those emaciated bodies was OK, but any hint of a crotch was verboten. But people are funny like that.

His inclusion (or not) doesn't make any difference to the message of the picture. Even the most rabid Holocaust denier couldn't get any mileage out of it (though it seems some have tried!) Do we need to look for any reason other than his semi-nudity?

31
Why was Switzerland not attacked during the two World Wars?
7
What color triangles did the different religious groups (those not Jews or JWs) wear in Nazi concentration camps?
2
Are there any images of the USS Enterprise at night?
23
Why did the Soviet Union not "grant" Inner Mongolia to Mongolia after World War Two?
14
Why did the Germans build battle cruisers with a different profile than the British?
0
Was the town Jadovno near Gospić named after the concentration camp during World War 2, or was it the other way around?
3
Why are early submarines faster on the surface, while later types are faster when submerged?