In 18th century America, how did people board ships to travel long distance?

This is a continuation of this question I asked earlier. According to the answers I got from the question, a better way for my character to travel is by ship, as quoted from user Mark Johnson:

Taking a ship to the nearest sea port of the final destination was probably more often (and swifter) done than long distance overland travel.

However, I just can't seem to find any source about traveling by ships at the time period of my story (1778 - 1779 America). Most results I found on the Internet are about life as a sailor, goods transportation by ships, and naval warfare. The closest to a history of travelling by ships that I could find is this website, which states that the earliest ship to carry passengers was from the early 1800s (please correct me if I interpreted what I read wrong):

The earliest ocean-going vessels were not primarily concerned with passengers, but rather with the cargo that they could carry. Black Ball Line in New York, Advertisement in 1818, was the first shipping company to offer regularly scheduled service from the United States to England and to be concerned with the comfort of their passengers.

Without doing any Internet search, I think that it was possible for someone with enough money to travel long distance by ships, but I just can't seem to find anything to support that belief.

I'm in the process of reworking my story. I have omitted the possibility of my character using a carriage to move around and opted for a ship instead. In this new scenario, my wealthy gentleman wants to get out of the town, and he decides to board a ship. However, he also has a secret relationship with a woman, and she wants to run away with him. He tells her to meet him at the sea port and he will take her together with him. So for planning out the scene, I need to answer the following questions:

In your timeframe there should have been routes from Charleston/Savannah to Boston/New York.

The time of day would be based on the tide.

A ship would leave Charleston when the tide was receding (from high to low, towards the ocean), since the receding water would assist the ships movement (otherwise it would have to fight against the water movement). For arrival the opposite.

The exact time would be depend on the condition of the harbour.

The water level must be high enough at low tide to avoid being grounded. The 1780 map of Charleston (top is west, bottom east, right north, left south) below shows why it's harbour was on the Cooper river (right side of the map ; the ocean towards the bottom of the map).

How a ship would be boarded would also depend on the water level at the dock. If too low for the ship type you would have to row out to the ship, otherwise you could board directly at the dock. 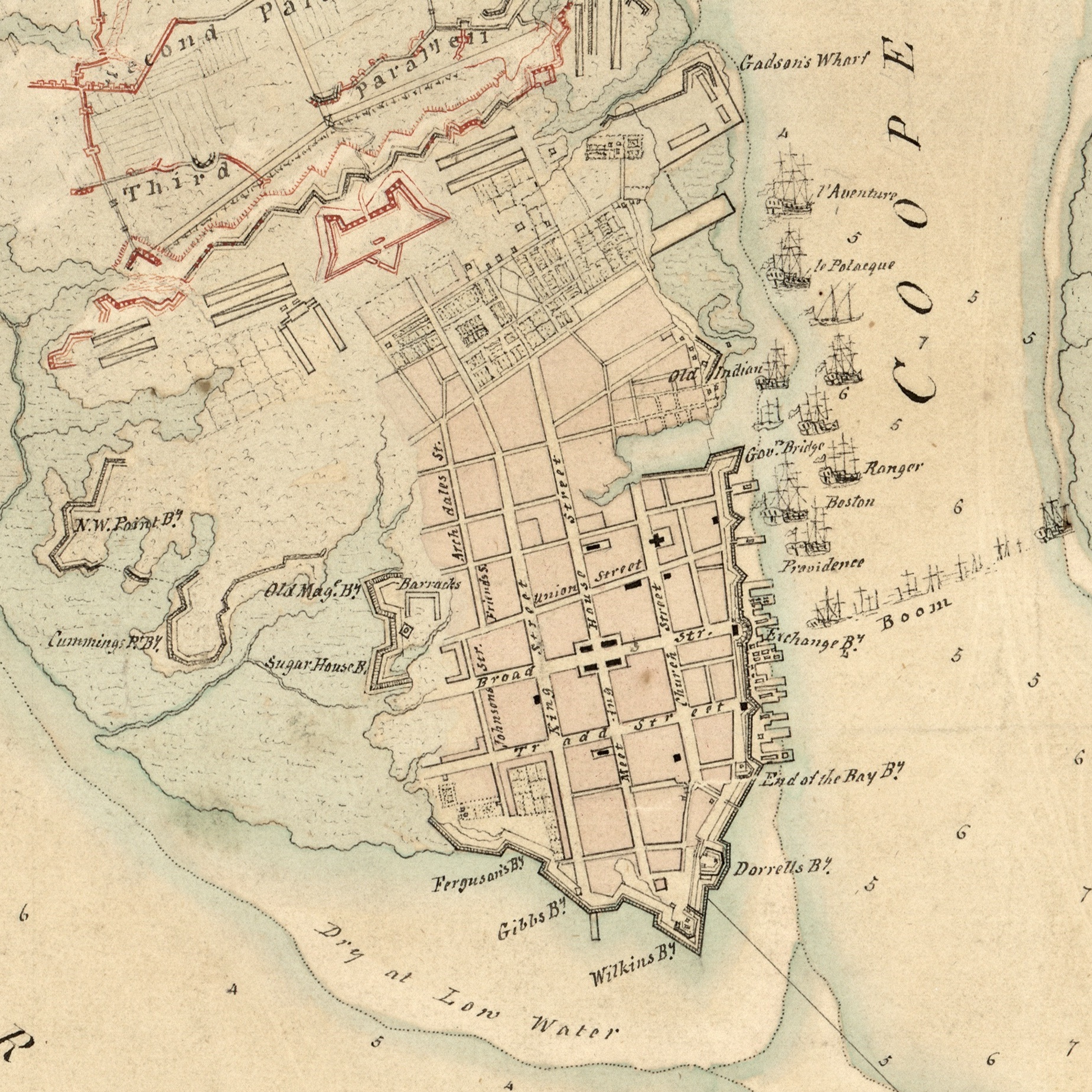 Based on English Literatur for sea travel in the 19th century, boarding in the early evening was commonly done since: Time and tide wait for no man. In the early 19th century, where passenger services were not common place, it was mainly a Captain's privilege to take on passengers.

Not the answer you're looking for? Browse other questions tagged 18th-century colonial-america transportation ships or ask your own question.

6
How did coach service in 18th century America work?

15
How common was it for un-documented ships to bring settlers to the American colonies 1700-1750
4
How long did it take to sail from Philadelphia to Boston in the 1700s?
38
What's the rationale for shipping coins back to Spain from its colonies?
1
Ports with ships in the commercial Halifax trade, late 18th Century
6
What was the typical speed of a tramp steamship?
6
What are the stages of traversals of the Mediterranean Sea?
6
How did coach service in 18th century America work?