How do we know who ancient sculptures depict?

Inspired by this statue of (ostensibly) Clementia, Roman goddess (figure from Wiki). 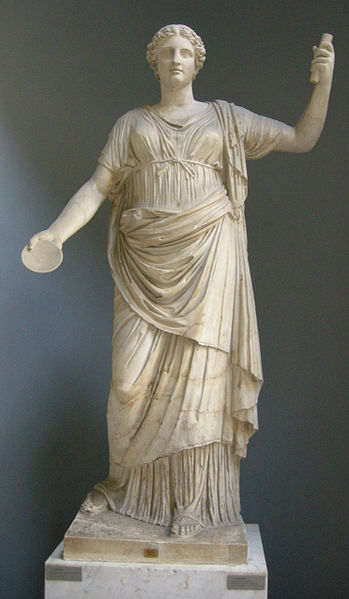 How do we know this is Clementia? The Wiki article on Clementia says "In traditional imagery, she is depicted holding a branch (possibly an olive tree branch) and a scepter and may be leaning on a column", but there is no branch nor scepter nor column in this statue.

In the same vein, how do we know who the subject of any sculpture is? I imagine some subjects will be easily identified because of the things they have (e.g. this has to be Justitia because of the sword & scales), but there are also many sculptures that don't have this imagery. It's possible some sculptures have "documentation" left behind by the sculptor, but it's improbable that they all do. Yet we are still apparently able to, e.g., write this for the Lady of Auxerre (figure from Wiki) even though its provenance is unknown:

The relatively small (65 cm high) limestone Cretan sculpture called the Lady of Auxerre (or Kore of Auxerre), at the Louvre Museum in Paris depicts an archaic Greek goddess of c. 650 - 625 BCE 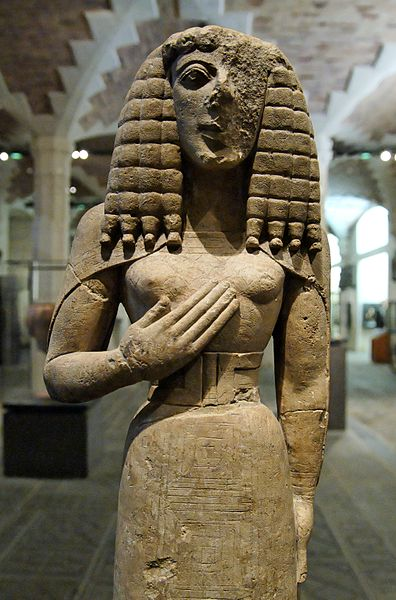 So we can't identify which goddess it is, but we know it's a goddess. Why? Why can't it be a statue of a random Greek woman?

Related but narrower: How do we know this bust is Aristotle? which seems to imply that the statue of Clementia might not be Clementia at all, and the same goes for the Lady of Auxerre who might not be a goddess.

I've gathered that there are a few ways, having wondered that myself.

Corroboration can be weak or strong. We have some portraits and statues that are affirmed to be X by a slightly less ancient authority than the sculpture's own provenance (e.g. Aelian identifying Pythagoras). Tradition has passed them down to us as that person, but we don't always know their sources or evidence. That's not to say they can be thrown out, of course; maybe they really did have access to something we don't, such as a plaque that went with it or the document commissioning a portrait of X. Speaking of which, we can have such documents ourselves if lucky. Here are some plaques found in Pompeii that "may belong to a monument or monuments not yet excavated", which if we find we'll identify fairly well.

Another kind of corroboration is in multiple instances. Many famous figures and deities have multiple portraits (many are even simple copies, as our many Roman copies of Greek busts). If some are known with more certainty because of inscriptions, we can identify the others based on them. Here's an example of a Caesar whose face is very close to the portrait on denarii of the time, which we know with certainty is meant to be his likeness.

Chronological probability also plays a role, but is not very strong. The reasoning is simple: Here's a statue found in this place, dated to this time. The most likely figure from that place and time is X ... Now, in the case of philosophers, this argument isn't very strong, but as jwenting wrote, it works well in a temple of Artemis.

For deities as well, the system of symbolic representation is quite thorough and careful, as you indicated regarding Justicia. Admittedly, it's more of an Eastern phenomenon, from Egypt through Mesopotamia, than it is Roman and Greek. Every bit can be significant, from each piece of garb to the expressions and gestures. The Wikipedia article you cited refers to the lady's hand positions and the possibility of prayer. Some Egyptian symbols are the ankh, wadjet, dyed, scarab, various sceptres, etc. These not only stand for such things as life and protection, but also bear the names of gods in various places.

They are supposedly consistent enough that you can find real people dressed up as deities or performing deities' actions, e.g. likely depictions of Cleopatra here and here. Some triangulation: if you find writing comparing Cleopatra to Isis, then find a statue of a woman dressed with some of Isis' symbols and with features copied from a bust that may be Cleopatra, said statue is likely of Cleopatra.

Of course, there is indeed lots of room for doubt.

It would take someone less ignorant than myself to say anything more definite, so I'll stop here :)

Several ways to be sure:

And then of course there are the blind guesses based on the general area the depiction was found. For example an unattributed statue of a women in a temple of Artemis will likely be assumed to depict Artemis.

Not the answer you're looking for? Browse other questions tagged sculpture or ask your own question.

20
How do we know this bust is Aristotle?

5
How is it known that Phidias used the golden ratio in the Parthenon?
2
Whom does this statue to the left of the cordonata leading up to Piazza del Campidoglio depict?
20
How do we know this bust is Aristotle?