How common were marital duels in medieval Europe?

On social media, I came across a post claiming that in medieval Germany spouses could settle a divorce outside of court, civic or religious, through trial by combat! Naturally, I was shocked (the middle-ages just keep surprising me) and tried to do a little research on the matter. I found that trial by combat was indeed a thing in medieval Europe as was the similar in terms of "logic" trial by ordeal (the winner of the battle/ordeal won through the grace of God and is thus innocent).

Searching, I found information on how these duels were performed. The man was placed in a hole with a club, and the woman was given rocks. More specifically:

As per the instructions, the husband was put up to his waist in a three-food-wide hole dug in the ground, with one hand tied behind his back. The woman was to be armed with three rocks, each weighing between one and five pounds, and each one wrapped in cloth. The man could not leave his hole but the woman was free to run around the edge of the pit. If the man touched the edge of the pit with either his hand or arm, he had to surrender one of his clubs to the judges. If the woman hit him with a rock while he was doing so, she forfeited one of her stones... If the woman won, the man was executed; if the man won, the woman was buried alive. 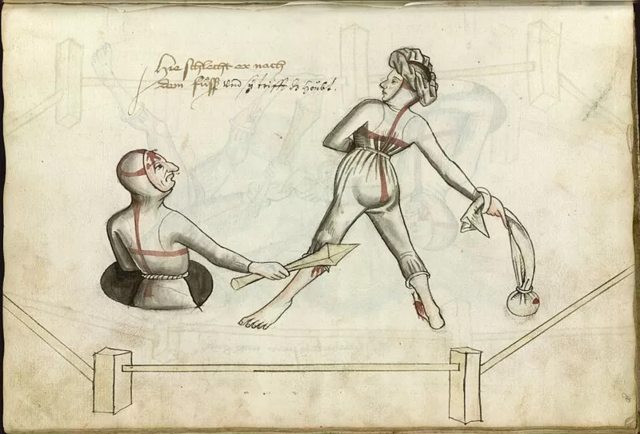 According to this source marital duels haven't been recorded since around 1200 and were mostly used in the Holy Roman Empire. My question centers around the following topics:

BONUS: Is there a complete record of such a duel with the names of participants and reasons for divorcing?

If the question is too broad please help me narrow it down!

Very curiously, we do not see husband and wife, necessarily, in these pictures. Talhoffer only writes of man ("er") and woman ("frow"). (More illustrations, with original transcription and with modern German translation.)

While it may seem 'obvious' that this would perhaps also apply to 'marital affairs' this is only made somewhat more plausible by the fact the in such a situation any woman could ask some male to stand in for her, usually her husband, as a Champione or Kämpe. Then it was possible for the female to 'just do it' herself, or being forced to do it, as either no-one stepped up, or the husband itself was 'the problem'. This is evidenced in Bavarian law were the Weregild was set to be for a woman assessed as 'half the amount compared to for a man — unless she decided to be brave and a face such duel herself in person, in which case the Wergeld would be of equal amount'. (Cf Meyer1873)

In religious views this old Germanic tradition of Trial by Combat was in Christian terms interpreted as God being generally part of the entire process and thus more or less 'ensuring' that the innocent won, the righteous prevailed, the truth-teller survived, and so on.

In judicial terms, the general occurrence of such trials was limited to situations over major crimes where no direct evidence was available. Direct evidence was usually required, even if just in the form of two witnesses, to reach a verdict.

This brings us back to the probably most commonly thought-of case for the above constellation: if a woman survived a rape, no-one heard her cries for help or saw the act, and later she accused a man of the deed, but instead of confessing he swears to be innocent, then a trial by combat may have been ordered by the judge.

Such kinds of trials, by combat, must be older than high medieval times, as they are already mentioned in the Sachsenspiegels recording customary laws and practices, written after 1200.

But the oldest concrete example casuistic law of such a conflict as it played out as Talhoffer depicted it between a man and a woman seems to be recorded in Augsburg 1276:

'If a man is accused by a woman that he has raped her, no-one saw or heard the act, and the man swears to innocent, then she was even required to face a fight "mit ir selbes libe" (with her own body: no champione allowed)'. Whoever lost this confrontation was then either dead or was then buried alive (Meyer1873).

Such practices were going a bit out of fashion for determining the truth in later medieval times, as the modern invention of torture took over for that. And while 'the church' initially had a positive view on these 'judgements by God', but already in 1215 the IV Lateran Council decreed:

Canon 18: Clerics may neither pronounce nor execute a sentence of death. Nor may they act as judges in extreme criminal cases, or take part in matters connected with judicial tests and ordeals.

This last prohibition, since it removed the one thing that gave the ordeal its value, the ecclesiastical authority, was the beginning of the end of trial by ordeal.

In the medieval literature this is all a very complicated back and forth between proponents and opponents of ordeals in general, with for example the Langobard king Liutprand (712–744) already lamenting that such practices are deeply irrational and not very Christian, as did likewise pope Nicolaus I (858–867) — while there were of course equally fervent fans of the practices. (Israel2016)

What can be generalized is that this trial by combat swiftly became ever more restricted to major offenses, like murder, betrayal, and rape. It was certainly not a common 'form of divorce'. One such prominent case for a divorce involving an ordeal was that of Theutberga, who was ordered to one such ordeal — non-combat: Kesselfang (~hot water) — but she found a replacement to do it for her. In any case, that very divorce procedure took a while longer than a swift whack on a head…

The Talhoffer book is being often regarded as something like 'among last evidence' for an outgoing practice, the last such duel recorded in Brussels in 1511 (according to — Walther Kabel: "Zweikämpfe zwischen Mann und Weib", Bibliothek der Unterhaltung und des Wissens, 1911, Vol 3, p208–210). And to top it off: this was generally disputed to have ever taken place, at all, by many later historians.

But for example from 1288 Bern we know of such an occurrence, not only provisioned for in laws, but reported in the chronicles:

"on a meadow between a wall and the church yard a woman and man have fought on the eighth day after Christmas. the woman won"

This one case is perhaps the very same, and overall relatively rare, occasion that is depicted rather late and equally fanciful in the Spiezer Chronik: 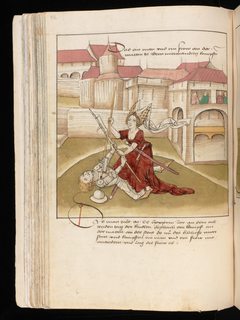 Although the literary texts certainly do offer examples of sword and buckler combat as a form of training and/or entertainment, it seems most unlikely that the individuals depicted in MS I.33, particularly Walpurgis [a clearly female swordsmanship apprentice, LLC], would be involved in physical training of this kind for simple amusement, or for show, given the absence of literary depictions of women actively engaged in combat. On this point, I disagree with Forgeng:

‘German evidence makes it clear that women did at times take part in judicial combat, but the apparently ludic context of the present text suggests that for some it could also have been a pastime.’

The near-total lack of any depiction of women taking part in combat in medieval German or French literary texts is, I consider, highly significant.

[…] Given that there is evidence that some women also took part in judicial combats, however rarely, it seems plausible that the system depicted in MS I.33 was intended to prepare individuals during their lertag before undergoing a judicial duel.

So, how "common" was such a marital & judicial duel with weapons? Compared to today's divorce rates, medieval divorce was certainly a much rarer phenomenon over all. 'With weapons' it should be exceedingly rare. 'Divorce by club as common method of divorce' certainly is an exaggeration. But a man — possibly in a pit or otherwise handicapped – fighting a woman, in judicial trial by combat, was definitely a possibility, at least envisioned as 'common enough' to be regulated en detail in laws, but then rare enough so that we only get few real examples to list.

To counter the misleading exaggeration on this on 'social' media, one might turn this ideation on its feet with slightly less hyperbole, that all these regulations on ordeals were not intended to correctly perform all these many physical arguments that took place, but ritualize them into slowness to ideally prevent them from happening at all possible stages:

The judicial duel thus appears to be a strictly regulated and highly ritualised phenomenon, from the filing of the suit to its end, whose slowness could force those willing to fight to reflect and, ideally, to give in. Those who offered or accepted a duel did not act spontaneously, but had to consider their decision carefully with regard to its possible deterrent consequences for themselves and others, and test its proportionality against the possible alternatives for an amicable settlement of the conflict. The aim of the established rules is, exaggeratedly formulated, not the implementation but the avoidance of the judicial duel. Nevertheless, the demonstration of readiness to fight seems to have been indispensable as proof of the legitimacy of one's own claim or also as evidence of one's own bravery.

Not the answer you're looking for? Browse other questions tagged middle-ages europe law or ask your own question.

5
What are other ancient encyclopaedic texts like Pliny's "Naturalis Historia" were available to medieval people?
11
Was rape common in Europe during the Middle Ages?
11
Who was the oldest woman that we know of to give birth in the Medieval Europe?
31
What were sandbags used for in medieval duels?
4
Are there any documented cases from ancient or medieval times of someone escaping captivity by cross-dressing?
25
Was frequent bathing for personal hygiene in medieval Europe common or not?
4
How common was cannibalism in Christian Europe until the 17th century?
35
How literate were common people in Medieval Europe?