What was the price of a theatre ticket in London during WW2?

I would like to know the price of a theatre ticket in the city of London during the second world war. I can't find this information anywhere.

UK Pre-decimal Currency: there were twenty shillings (s) to a pound and twelve pence (d) to a shilling. If written '7/6, this means 7 shillings and 6 pence.

Prices varied enormously, depending on the theatre, the cast, and (especially) where you were seated. A box for four or five cost several pounds while some stall seats and the balcony could be as little as 2s6d (2 shillings and six pence, about £5 in today's money). At least one theatre offered anumber free tickets to servicemen. Worth noting, though, is that few theatres in central London were open (especially at night) until the London Blitz was over (May 1941).

The example below is for the Q theatre, near Kew Bridge (Hounslow, London), in 1944. 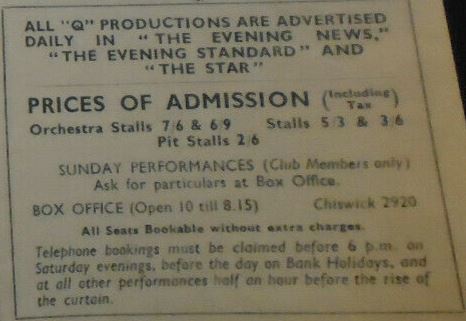 The programme also carried this message in case of an air raid warning during a performance:

Such notices were found in all programmes:

The programmes always include instructions on what to do in the case of an air raid. Audiences were warned that an air raid was in progress through illuminated signs, and were free to leave for a shelter if they wished: ‘All we ask is that ‘ if you feel you must go you will depart quietly and without excitement’, as the programme for Olivier’s Richard III at the New Theatre put it in September 1944. Many theatregoers preferred to stay put and enjoy the play.

The Windmill Theatre remained open throughout the war (except for 12 days in Sept. 1939) with the Windmill Girls as the main attraction. A special midnight matinee in 1940 cost 1 guinea (1 pound and 1 shilling, or about $4.20 at the time); as this was for war relief, the ticket price was likely inflated. However, for a while (at least) the theatre was giving 500 free tickets a week to soldiers. 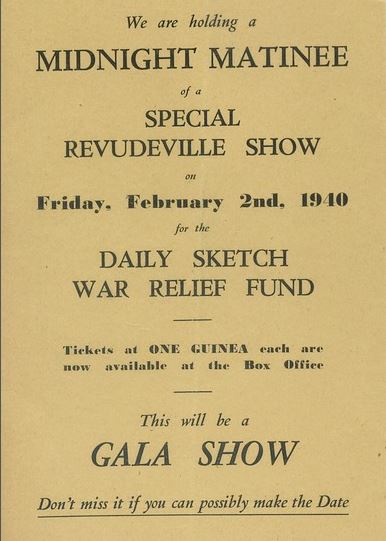 The Stoll Theatre in Kingsway (central London) had prices ranging from 2s6d (balcony) to 10s6d for a performance of Show Boat in 1943. The London Palladium had an even greater range of prices as it also had boxes, though the example below is for a revue from just after the war (1946). 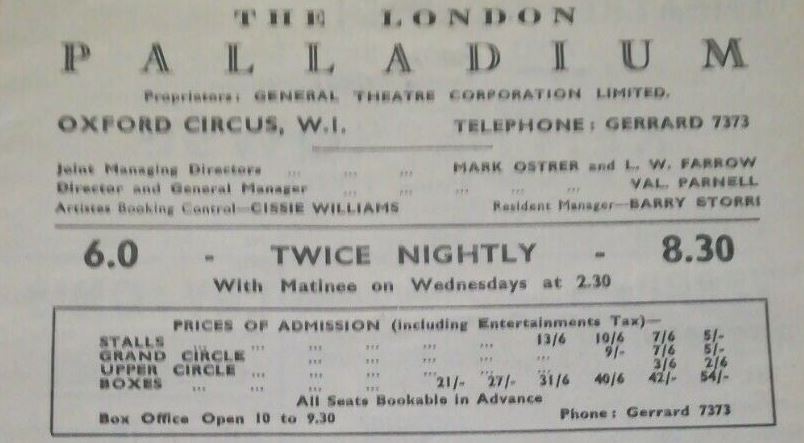 A little before the war (1937), the Theatre Royal, Haymarket advertised the following prices for a performance of Juno and the Paycock by Sean O'Casey. Again, you can see that prices depend on location within in the theatre. 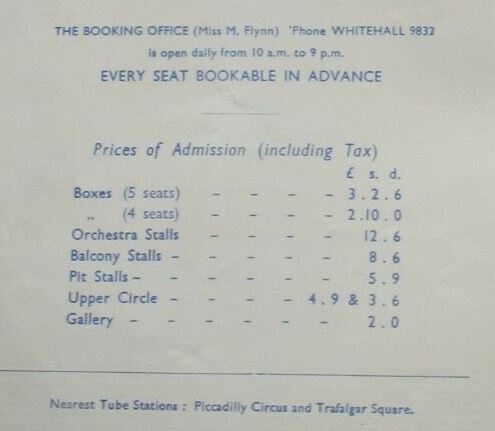 During the London Blitz especially, the choice of performances was very limited due to the closure of theatres.

Air raids disrupted performances. These problems were ventilated regularly and fully in trade journals like Theatre World which lamented in October 1940 that due to the Blitz ‘The choice of the Londoner is now restricted to the delights of the Revudeville at the Windmill and the lunch-time ballet hour at the Arts Theatre Club, to which must be added the brave venture of Shakespeare at the Vaudeville, matinées only’. Things got easier once the Blitz was over, but the flying bombs of 1944 brought another crisis, closing many shows...

It rapidly became clear that the continuation of normal leisure facilities would be essential to maintain general morale and some sense of normality. Londoners and visitors alike needed some distraction from long working hours, CD commitments, travel problems and air raids, and theatre-going was a popular pastime.

Productions in 1940 and 1941 included such major stars as John Gielgud, Robert Donat, Alec Guinness, and Michael Redgrave. Also, theatre productions could serve a useful propaganda purpose. Consequently, many productions were subsidized by the government through the Council for Encouragement of Music and the Arts (CEMA) - see, for example, this production of George Bernard Shaw's Arms and the Man.

According to terramedia.co.uk the average price of a theater ticket in London in 1940 was 4.37 pence. The site has prices for other years if you need that information.,

Not the answer you're looking for? Browse other questions tagged world-war-two entertainment or ask your own question.

13
What happened to the French gold at Martinique during WW2
12
What is the current location of the "Cauldron of Trun and Chambios" from August 1944?
10
How much time did people have to take shelter during the Blitz in 1940-41?
1
What was the income tax rate in the UK during WWI and WWII?
7
Is there a WW2 European bomb damage atlas?
6
During WW2, what B-29 crew role did the abbreviation EMG mean?