Based on the Black Obelisk of Shalmaneser III, Did Assyrians of 825 (or) 840 BCE associate the מָגֵן דָּוִד Magen David as a symbol of Yisrael?

The Assyrian Black Obelisk of Shalmaneser III (in the British Museum) could have associated the nation of Yisrael with a Menorah, but chose to distinguish Yehudim with an encircled star similar to the מָגֵן דָּוִד "Shield [of] David".

The British Museum claims the Obelisk (excavated by Sir Austen Henry Layard in Nimrud) was constructed in 825 BCE, and provides the following description :

Black limestone obelisk of Shalmaneser III; glorifies achievements of king and minister; inscription; illustrations show tribute from all directions; tribute bearers in five rows, identified by captions; each row has four panels, one on each side of the obelisk;

In the illustrated panel of the "Jewish Delegation on to Shalmaneser III", the Symbol shown above "Yaua of Bit Omri" (Jehu of the House of Omri) matches the design of a מָגֵן דָּוִד "Magen David".

Based on the Black Obelisk of Shalmaneser III, Did Assyrians of 825 (or) 840 BCE associate the מָגֵן דָּוִד Magen David as a symbol of Yisrael?

Look closely and see that it is merely a multi-pointed star, not the familiar hexagram of the Magen David/Star of David: 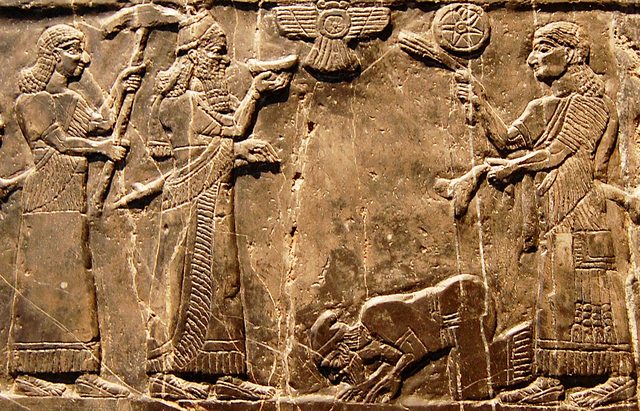 It would run counter to established knowledge about the associations between Jewish faith or people and the hexagram symbol, Magen/shield of David or 'Star of David':

Unlike the menorah, the Lion of Judah, the shofar and the lulav, the Star of David was never a uniquely Jewish symbol. […]
The earliest Jewish usage of the symbol was inherited from medieval Arabic literature, where it was known as the Seal of Solomon among Muslims, […]
The hexagram does appear occasionally in Jewish contexts since antiquity, apparently as a decorative motif. For example, in Israel, there is a stone bearing a hexagram from the arch of the 3rd–4th century […]
The use of the hexagram in a Jewish context as a possibly meaningful symbol may occur as early as the 11th century, in the decoration of the carpet page of the famous Tanakh manuscript, the Leningrad Codex dated 1008.

And while the person depicted is supposed to be Jehu, the insignias on display on the relief belong to Shalmaneser III, they are:

The star in a drawing: 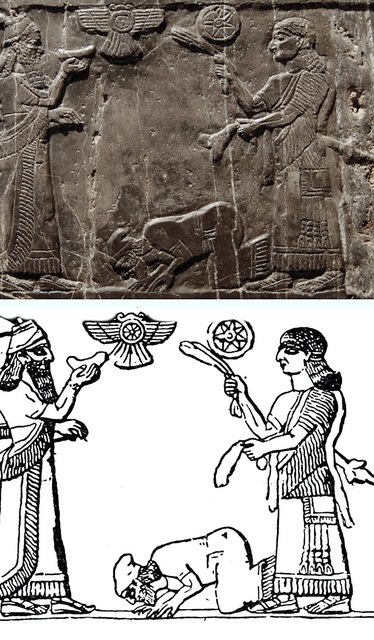 The eight-pointed star was Inanna/Ishtar's most common symbol. Here it is shown alongside the solar disk of her brother Shamash (Sumerian Utu) and the crescent moon of her father Sin (Sumerian Nanna) on a boundary stone of Meli-Shipak II, dating to the twelfth century BC.

Inanna/Ishtar's most common symbol was the eight-pointed star, though the exact number of points sometimes varies. Six-pointed stars also occur frequently, but their symbolic meaning is unknown. The eight-pointed star seems to have originally borne a general association with the heavens, but, by the Old Babylonian Period (c. 1830 – c. 1531 BC), it had come to be specifically associated with the planet Venus, with which Ishtar was identified. Starting during this same period, the star of Ishtar was normally enclosed within a circular disc. During later Babylonian times, slaves who worked in Ishtar's temples were sometimes branded with the seal of the eight-pointed star. On boundary stones and cylinder seals, the eight-pointed star is sometimes shown alongside the crescent moon, which was the symbol of Sin (Sumerian Nanna) and the rayed solar disk, which was a symbol of Shamash (Sumerian Utu).