I am curious about the routing of the Royal Road. It bypasses Ecbatana by some distance, which seems odd, and ends in Susa, even odder. It would seem that at least some of the empire's business was carried out at Persepolis, and the nearby Pasargadae seems worthy of a road. I understand the primary purpose of the Road was messaging, but this makes it even odder that Persepolis was not included.

Persepolis was on the Royal Road, but this section was not described by one of the main literary sources, Herodotus. The map on the Wikipedia page for the Royal Road specifically states that it is showing "the section of the Royal Road noted by Herodotus", so it is incomplete. The Royal Road was, in fact, far more extensive than what Herodotus described (see the map below, though even this is not complete as it doesn't show the road between Susa and Ecbatana).

It appears that the ancient Greeks knew little or nothing of Persepolis until the time of Alexander the Great, some 200 years or more after its founding. Also, what Herodotus described was but part of an extensive network of royal roads. Further, archaeologists believe that sections of the road made use of previously existing roads so the the route from any one city to another was not necessarily the most direct.

...found that refer to the system of horse changing on the Royal road; it was called pirradaziš. From these tablets, we know a lot about the continuation of the road from Susa to Persepolis -23 stages and a distance of 552 kilometers- and about other main roads in the Achaemenid empire. 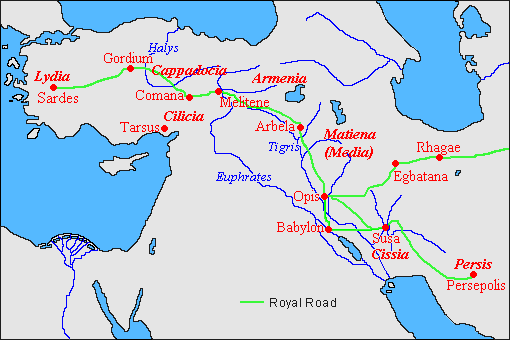 Some Persian Achaemenid roads were paved and, on the extension from Susa to Persepolis,

...the traces of the paved surface of the road are visible near Bebahan and the ruins of a royal pavilion at Fahlian.

Dr Geoffrey Summers has observed that

a method of road-building was developed that consisted in paving the softer parts of the road, and even of making artificial ruts for wheeled transport.

Although not shown on the map above, there was also a road to Pasargadae, and ones across Luristan which connected Susa and Ecbatana:

"We do hear of two paved highways between Susa and Ecbatana. But Diodorus tells us at the same time that stretches of the Royal Road were difficult because of the many steep slopes but still practicable for carriages...".

Not the answer you're looking for? Browse other questions tagged ancient-history transportation persia or ask your own question.

7
What is the oldest road in the world that has been in continuous use?
31
Why didn't the silk road run north of the Black Sea?
7
Where was the Buenos Aires - Lima Spanish Royal Road?
9
What is Darius III wearing on his head?
1
Who bought Persian rugs from the silk road?
25
What is the oldest road tunnel in the world?
12
When did the last (non-tourist) commercial stagecoach line run in the USA?
4
Why wasn't Akkadian translated into other more common languages?