When did Romans give sticks to children to beat an enemy traitor?

I'm pretty sure I one time read a story along these lines:

The Romans were at war with some other nations (maybe during the early days of the Republic?). A traitor from the opposite camp abducted children from high ranking enemy men and presented them to the Romans so they could take them as hostages. The Romans found his conduct despicable and gave sticks to the children so they could beat him all the way back home.

Any idea what I am referring to?

This story recounted by Dionysius of Halicarnassus (died after 7 BC), Livy (died Ad 12 or 17) and Plutarch (died after AD 119), the latter citing Livy directly but also using other sources. Their accounts are broadly similar, though not identical, and all mention the beating with rods by the children.

The story relates to a war fought by Rome against the Falerii, a city to the northeast of Rome, in 394 BC, and details the response of the Roman commander Marcus Furius Camillus (died 365 BC), when offered (Falerii) children as hostages by their treacherous tutor.

During an apparently lengthy siege, a tutor of the children of some of the prominent besieged residents took the children out of the city, supposedly for some exercise but instead led them to the Roman forces, intending to deliver them as hostages. The Roman commander, Marcus Furius Camillus, was not impressed though. From Livy Book 5, Chapter 27,

He [the tutor] had, he said, given Falerii into the hands of the Romans, since those boys, whose fathers were at the head of affairs in the city, were now placed in their power. 7 On hearing this Camillus replied, ‘You, villain, have not come with your villainous offer to a nation or a commander like yourself. 8 Between us and the Faliscans there is no fellowship based on a formal compact as between man and man, but the fellowship which is based on natural instincts exists between us, and will continue to do so. There are rights of war as there are rights of peace, and we have learnt to wage our wars with justice no less than with courage. 9 We do not use our weapons against those of an age which is spared even in the capture of cities, but against those who are armed as we are, and who without any injury or provocation from us attacked the Roman camp at Veii. 10 These men you, as far as you could, have vanquished by an unprecedented act of villainy; I shall vanquish them as I vanquished Veii, by Roman arts, by courage and strategy and force of arms.’ 11 He then ordered him to be stripped and his hands tied behind his back, and delivered him up to the boys to be taken back to Falerii, and gave them rods with which to scourge the traitor into the city.

Dionysius of Halicarnassus' account is slightly different, with the added detail that Camillus first asked the Roman senate what he should do with the child hostages and their tutor. From Roman Antiquities, Book XIII:

Camillus, having handed over the schoolmaster and the boys to be guarded, sent word by letter to the senate of what had happened and inquired what he should do. When the senate gave him permission to do whatever seemed best to him, he led the schoolmaster together with the boys out of the camp and ordered his general's tribunal to be placed not far from the city gate; and when a large crowd of the Faliscans had rushed up, some of them to the walls and some to the gate, he first showed them what an outrageous thing the schoolmaster had dared to do to them; then he ordered his attendants to tear off the man's clothes and to rend his body with a great many whips. When he had had his fill of this punishment, he handed out rods to the boys and ordered them to conduct the man back to the city with his hands bound behind his back, beating him and maltreating him in every way.

Impressed by the Camillus' refusal to accept the help of such a traitor, the residents decided to end their resistance to Rome. Livy again:

The Roman sense of honour, the commander's love of justice, were in all men's mouths in the forum and in the senate, and in accordance with the universal wish, ambassadors were despatched to Camillus in the camp, and with his sanction to the senate in Rome, to make the surrender of Falerii. 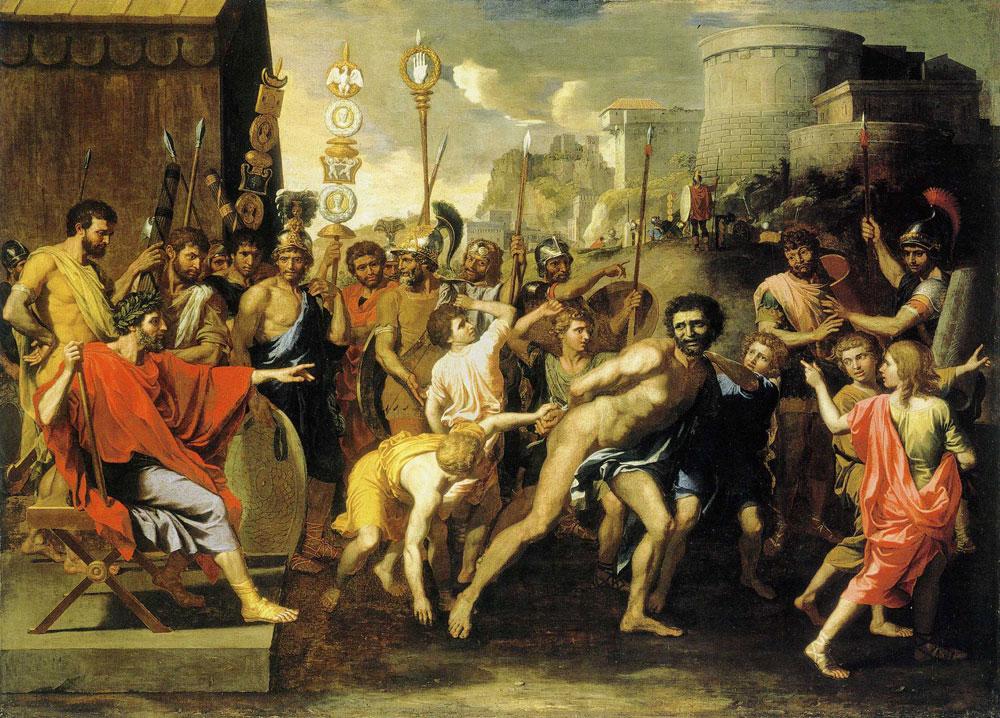 "Furius Camillus and the Schoolmaster of Falerii" by Nicolas Poussin (1637), though not showing the rods mentioned by Dionysius, Livy and Plutarch. Source: PubHist

After the Faliscans had got their sons back and had punished the schoolmaster in a manner his wicked plan deserved, they delivered their city up to Camillus.

Plutarch's account is closer to Livy's, and there seems to be a confusion among the sources as to when Camillus contacted the senate, before or after the tutor was punished and the boys returned. In any case, peace ensued but Camillus was to pay a price as his soldiers were denied booty because the Falerian city was not sacked. Plutarch, in The Life of Camillus:

...the soldiers thought to have had the sacking of Falerii, and when they came back to Rome empty-handed, they denounced Camillus to the rest of the citizens as a hater of the common people, and as begrudging to the poor the enjoyment of their rightful booty.

Over the following 150 years, the Falerii were mostly, though not always, at peace with Rome. In 351 BC, they sided with the Tarquinii against Rome but, less than ten years later during the First Samnite war in 342 BC, asked for a permanent peace treaty. During the Third Samnite War (298 to 290 BC) they eventually joined the Etruscan city states after initially remaining out of the conflict.