What is the reason for the modern prominence of the Confederate battle flag, as opposed to some other Confederate flag?

It seems whenever there's news of some protests in the USA, the Confederate battle flag will almost invariably show up in the associated photoreports.

Granted, this may just be observer bias due to me not having been to any of the protests/rallies and due to the media favouring the depictions of the flag in their news reports for some reason, but this is also my point - why this flag, of all the other flags the Confederacy seems to have used?

Wikipedia claims its revival started in late 40s with the Dixiecrat party, but that doesn't answer my question of why this flag, and not others.

It appears that the main problem with the official confederate flags is that they were effectively designed by committee. The resulting flags, in the opinion of General Beauregard, looked too much like the US (Union) flag, or the various state flags, to avoid confusion on the battlefield. As you can imagine, this seemingly utilitarian concern was the general's primary requirement for a flag.

The bureaucracies he had to appeal to of course preferred the designs they came up with, so the Army of the Confederacy in the end just stuck with its own "battle" flag, and the official confederate government stuck with theirs.

However, in a very real way the Confederacy was its army. There were about 12 million people living in the seceding states (including slaves), but very few of them would have had much business (and fewer much affection) with government buildings flying the official flag. However, there were on the order of a million soldiers in their army (probably around 20% of the area's white male population), and they were marching, fighting, and dying for that battle flag every day.

And of course on the Union side, nearly everyone who dealt with the Confederacy was in the Union army, and to them the battle flag was its standard.

So when the various southern veterans groups needed a flag, it makes perfect sense they'd use their battle flag. Similarly when dead-enders and White Supremacists wanted a flag to identify with the Confederacy's "lost cause" of a hierarchical White Supremacy-based society, they went with the flag most recognizable both to their supporters and to those they were opposed to.

This seems like lower-case history, but still history: the popular 1979 TV series "The Dukes of Hazzard" featured a car named the "General Lee" with the confederate battle flag painted on the roof. It was on nationwide for 7 seasons, keeping that flag the whole time. As to the show's popularity, even today "Daisy Dukes" are "short, form-fitting, denim cut-off shorts [...] named after the character of Daisy Duke [...][in] The Dukes of Hazzard". A shot of the car: 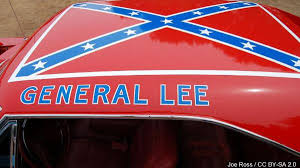 My editorializing is that by 1979 that flag was at least a contender for "The Flag of the South", which is partly why it was chosen for the show (the other part being how it looked on top of an orange car). The show then cemented it as the southern US flag, and at the same time sanitized it somewhat; especially for TV-watchers of that generation not from the South. They'd probably know that was a real flag, but be left with the impression it represents the common man (the Duke boys) standing up to corrupt officials (the evil Boss Hogg).

The argument I've heard given at various rallies/events with a prominent amount of CSA battle flags is that the flag represents the "good parts" of the CSA, meaning the values related to state's rights and their battlefield prowess. "Heritage not hate" if you will. The various national CSA flags represent the CSA in totality, including the preservation of slavery and treason against the United States. So the lack of the various CSA national flags "proves" that the bearers are not racist or for the actual overthrow of the United States. I can't say I find that argument particularly credible, but it's the line the battle flag wavers I've met throw out.

On a similar note, some people in the "heritage not hate" crowd have switched to the Bonnie Blue Flag. The reason being that (to them) it symbolizes much the same thing as the CSA Battle Flag while similarly "lacking" the connotations of the various CSA National flags, but with the added bonus that it doesn't "look racist" to the average American. Having a CSA battle flag bumper sticker might get your car keyed in many places, but since the Bonnie Blue Flag is less recognized, displaying it gets people less flack.

I apologize on the lack of sourcing in this answer. It comes from spending 30+ years as a Civil War buff and observing dozens of political/protest events in the US South. So directly observed but I think a step beyond merely anecdotal.

The flag that’s currently being flown as “the Confederate Battle Flag” is based on a flag used by the Army of Tennessee beginning in January 1864. There was also a similar naval flag. 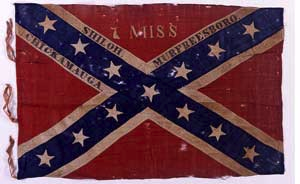 This was based on a battle flag used by Robert E. Lee’s Army of Northern Virginia from March 1861, because the official Confederate Flag at the time was too-easily confused for the United States Flag. William Miles’ design had previously been rejected by the The Committee on the Flag and Seal for looking “like a pair of suspenders,” but was chosen as a battle flag by General Pierre Beauregard anyway. This was square rather than rectangular. It had one star for each state of the Confederacy. Other Confederate generals during the war chose different battle flags, but the one became used by armies in the east and was the best-known. 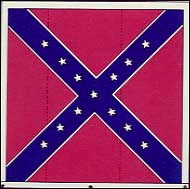 In May, 1863, the Confederacy adopted the “Stainless Banner” as its new national flag, with the square battle flag as the union on a white field. 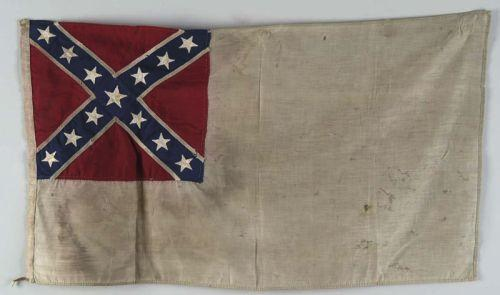 There was a third version of the flag, adding a red bar on the right, but it was barely-used, since Lee surrendered only a few weeks later.

Within a decade after the end of the war, the United Confederate Veterans and the United Daughters of the Confederacy were using the square battle flag in war memorials. The original intent of using the battle flag instead of the Stars-and-Bars or Stainless Banner was to honor the soldiers rather than the politicians. Originally, the UCV tried to promote the square battle flag of the Army of Northern Virginia over the rectangular flag of the Army of Tennessee, but the rectangular design, which looked more like a national flag, became more popular.

In the ensuing years, the flag was adopted by the Kappa Alpha Order, a fraternity founded at the university that made Robert E. Lee its president. This began with their organizing war memorials, but the fraternity soon began using it in totally unrelated contexts. It was in the hands of students at southern colleges that the flag appeared at the convention of the States’ Rights Party in July 1948, which ran on a platform of maintaining Jim Crow laws and racial segregation. In November 1948, the UDC put out a statement condemning the use of the battle flag “in certain demonstrations of college groups and some political groups,” and southern states passed laws against what they considered “desecration” of the Confederate battle flag by using it as a decoration on disposable baubles.

Unfortunately, the flag also was adopted by White supremacist groups, such as the Ku Klux Klan. Just as the UDC feared when “the flag fad” began in 1948, many people now associate it more with reactionary politics than with its use from the 1870s to the 1940s almost exclusively in war memorials.

I can attest that it is now also used as a symbol of White southern culture more broadly, in places thousands of miles away from any Civil War battlefield.

The main motivation for most people's interest in the Confederacy was the South's unexpectedly impressive military competence. The Lee tank, as well as a number of US armaments (help me on this - but not bases!) have an aura of credibility because of Confederate battlefield performance, of which the flag was a large, very visible, facet. What about Jeb Stuart? Beastly system, dashing battles!

Who wants to re-enact the politics of how slave owning plantation masters convinced non slave owning whites to support their system which most certainly did not promote poor white employment? Who wants to argue the ethics of slavery?

To elaborate, since commenters seem to miss my point: most people looking at the confederacy will be looking at battles or military events. In corresponding images, be they from movies, paintings or even contemporary photographs when there are flags or unit markers, those are likely to be the Battle Flag, not the political flags. Because these are depictions of military events.

This is the same phenomena you would have from association of the red star with regards to the USSR. No, it isn't a political insignia, but its frequency in military imagery - again frequently the subject when people look at Soviet history - gives it a lot of association with the USSR. And that despite the hammer and sickle being a rather striking flag in its own right.

Speaking of striking and elegant, that is one thing the confederate flags are not, especially the 3rd variants. While the Battle Flag is rather stylish and distinctive. Besides the 2nd and 3rd variant do incorporate the X-stars, reinforcing it again.

Not the answer you're looking for? Browse other questions tagged united-states flags confederacy or ask your own question.

4
What do the four castles on the flag of Ibiza represent?
8
Origin/reason for reversed flag on right shoulder?
7
What is the history behind the stripes on the East India Company's flag?
39
Previous examples of large scale protests after presidential elections in the US?
8
Did the Confederate States of America ever officially adopt William T. Thompson's descriptions of the CSA national flag?
8
What does this Swiss banner/blazon/coat of arms/flag stand for?