Can anyone identify this coin found in Spain?

Can anyone identify this coin? 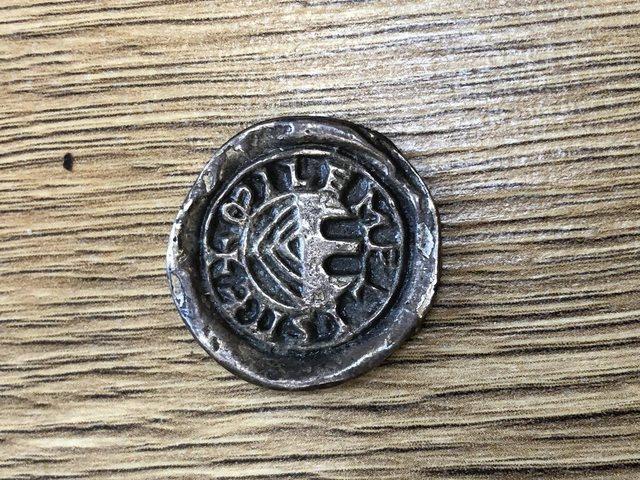 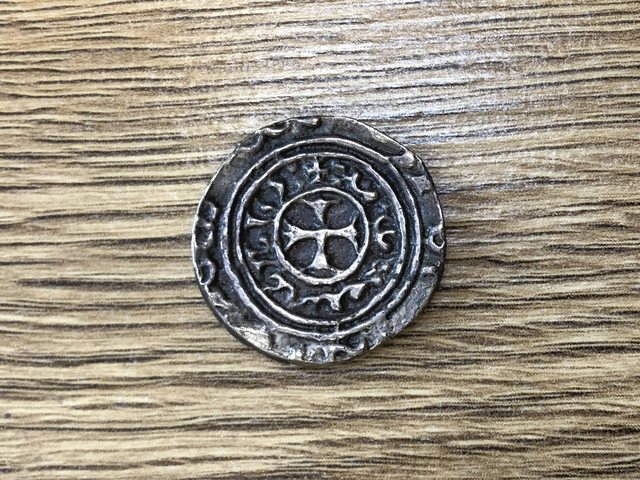 After a good amount of research I am pretty confident this coin is not real. It is made to look like a coin minted between 1000 and 1300, possibly by King William the Conquerer or maybe William Rufus, its imitating a silver penny hence the legible part of the script that says PILEM R?E?(X) but all legit coins would have two L's. If it is PILEMEL as suggested then that matches no known inscriptions. The crown (or what I am guessing is an attempt at a crown) is very crude and again not like any coin in the database. The obverse of this coin has basically gibberish for letters instead of the location or earl who minted it. It also appears to be silver plated over base metal, see the bottom right edge of the first picture and bottom of the second picture, this looks like plating that has worn off.

The back cross is a plain cross pattee without fleuries, trefoils, stars, crescents, or piles.

As to why P instead of W, The P was a late usage of the letter wynn, a P-shaped rune which had the sound value of a "w"

This coin is also about 5mm larger than this coin should be, all known examples are 18mm - 20mm give or take 1mm at most. I am also assuming this coin will weigh more than 1.3 +- .1 grams, but it would be appreciated if the OP weighs the coin and posts its weight in grams. It is also too thick, most of these are about 1.5mm thick. A legit coin would be able to be bent in your hand with a decent amount of pressure.

I have also gone through every known coin from both Williams and other Williams of this time frame like William of Holland and none match or are even close to matching. I also searched all coins with a reverse cross patee and a front inscription of I L E M (as that seems to be the part everyone agrees with) and again no matches. I also searched all coins with a cross and arab inscription, being that the unintelligible part of the reverse could possibly be arabic, if someone knows arabic that would help, again no matches, and these types with both islamic and christian parts are quite rare and well documented.

There is also a lot that just doesnt look right with the coin. The bulge around the edges of obverse. The thickness of the coin. The strange looking crown or maybe castle on the front. The gibberish writing around the pattee cross on the reverse. The writing that goes over the flan on the reverse. The odd patina or plating wearing off on both sides. Also the Cross in the inscription on the obverse would be the top of the coin making the crown? castle? be upside down.

So that leaves two options, either an ancient forgery or a modern fantasy piece, both could be possible, a metallurgic test would confirm which of these is most likely.