Did Hitler have any plans in regards to the troops he had stationed in Norway throughout the war?

Throughout WW2 Germany had 400,000 troops stationed in Norway essentially doing occupation duty and fighting of partisans after Norway's surrender.

Now as the war started to turn against the Germans in 1942 were there any official or unofficial plans on what to do with them?

It seems like a waste to leave 400,000 fighting men on a small country like Norway and not use them to shore up operations on the Eastern or Western Front.

Plans were made for whole of Scandinavia

First thing we need to notice is that Armee Norwegen controlled not only German troops dispositioned in its namesake country (Norway), it also controlled troops in Finland, participating in invasion on USSR. Also, it did contain troops that could be possibly used against Sweden. As such, it had effect on whole of Scandinavia.

Before we discuss situation country by country, let's first examine number of divisions in Scandinavia, during the war. As we can see, it started as just 7 in 1940, but quickly increased to 11 and then 13, as invasion of USSR started because troops were sent to Finland and from there to Soviet soil. In 1943 number of divisions reached 20, with now increased number of troops in Norway (as deterrence against invasion, and as warning to Swedes ). This remained until half of 1944, when Finland was forced out of the war, and German troops from there withdrew to Norway. Number of divisions gradually dropped (to 11), as some of them were pulled back to continent. It could be assumed that late in the war these divisions did not have full complement of men, and were usually lacking heavier weapons like artillery and especially armor.

According to some sources, at 10th of May 1945, German forces in Norway numbered 327 393, but this included Heer, Luftwaffe, Kriegsmarine, SS (not just Waffen SS, but also Gestapo and other members) and even Organisation Todt, Transportflotte Spee and other semi-civilians. Obviously, these were mostly not first-class combat troops. Units fit for combat were prioritized to be sent back to Germany via Denmark.

In the ending days of the war, German decisions were torn between strategic concerns mentioned above, dire military necessity and unavailability of transports and other logistic needs that could transfer all of German forces back to Germany. Therefore, they did what they deemed best for them in such circumstances.

Norway was strategic for a number of reasons. Two of them were as follows:

At the start of the war, at the time of the Chamberlain government, Norway remained neutral. The German ore carriers, if they spotted the British on the horizon, would dart for cover into a Norwegian fiord. Any attack, by Britain, would have been regarded as a breach of Norwegian neutrality. Churchill, as First Lord of the Admiralty, argued in Cabinet that the Royal Navy should mine the Norwegian fiords. Eventually Chamberlain accepted this position - which led to Hitler's invasion of Norway. It enabled Nazi Germany better to protect the supply routes, and prevented the ore falling into British hands.

It was mostly shipped in convoys out of the UK around the northern tip of Norway. Those convoys, in which many RN sailors and merchant seamen lost their lives, were bombed by the Luftwaffe out of bases in Norway - in summer, under the midnight sun, for almost 24 hours a day.

It also provided the German navy with the port of Narvik, which could be used for protecting the ore supplies as well as threatening the Soviet navy, and inhibiting the latter's emergence into the Atlantic.

Hence the Norwegian coastal waters were strategic, and would have been recognised by Hitler as worth the substantial investment involved in the occupation of Norway.

Plans are lofty, and Hitler usually a big fan of 'not one step back'. So, any plan would include keeping and securing what's gained. That may include thinning occupational forces to the bare minimum, but no withdrawal, ever. Easily seen in that German troops remained and controlled Norway right until the fat lady had sung her song in Berlin 1945.

But that's not all to it. Look at some maps to re-appreciate Norway's strategic value: 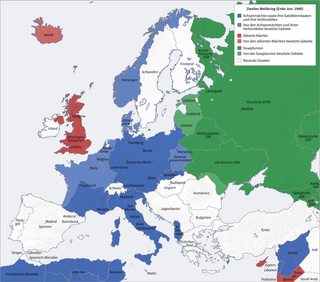 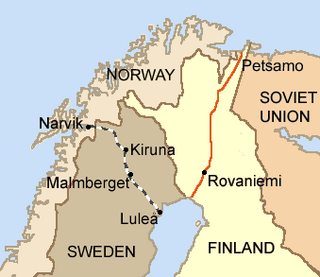 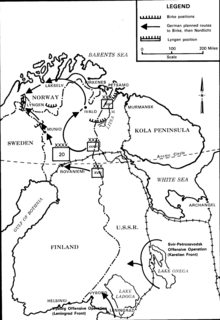 Go north for long enough, see that not only longitudinal lines become fuzzy in West-East meaning, but Norway indeed part of the Eastern front: supporting Finnish efforts, directly facing Soviets and troops engaging from there against allied shipping to Murmansk.

And indeed part of the Western front as well: possible staging ground for invading Britain, partially securing the Eastern North Sea and thus access to Atlantic for friendly shipping but denying the same to the Baltic for unfriendly…

These are disincentives for Britain and other allies, and 'incentives' for Sweden, Finland to not come up with funny ideas.

To answer strictly to the questions, No: Hitler had no plans for the troops in Norway.

First of all, the land troops in Norway were stationned there because English commando raids threatened Norwegian harbours: As said in another answer, thos harbours were important to control for the Germans because:

Then they were also used to support the invasion of Northern Russia, which was overall a strategic failure: no major objectives, especially Murmansk, was reached by German troops (but Finnish soldiers did reach the railway Moscow-Murmansk) and no success in terms of casualty ratio was registered.

Troops belonging to the Luftwaffe were used to attack Allied shipping to the USSR, with more (PQ 17) or less success. That was the plan for air units stationned in Norway. Same plan for the Kriegmsarine's U-Bootes, as well as most of surface units that would threatened both the Northern convoys (Hipper, Lutzow) or the Atlantic convoys (Tirpitz).

When you think about those German soldiers stationned in Norway, think of them not as a force stationned for an offensive plan, but more as a part of multiple defensive plans for the Germans:

Not the answer you're looking for? Browse other questions tagged world-war-two nazi-germany hitler ww2-european-theater norway or ask your own question.

14
Did Hitler receive any honours outside Germany?
10
Did Bismarck have any influence on Hitler?
25
What were the Allies' plans if they caught Hitler alive?
7
How did the forces required for invading Norway compare to those actually used for invading North Africa?
17
Why did the Japanese attack the Aleutians at the same time as Midway?
52
Was Switzerland really impossible to invade during WW2?